The $2.1 billion fleet of Guardian-class patrol boats Australia has given to Pacific nations to strengthen regional security has been plagued by design flaws, including carbon monoxide leaks, throwing into question whether the vessels can remain at sea.

Under the program, Australian ship maker Austal will deliver 22 of the 39-metre boats by 2023 to 12 Pacific Island nations, including Papua New Guinea, Samoa, Fiji and Timor-Lesté, to combat illegal fishing and transnational crime. 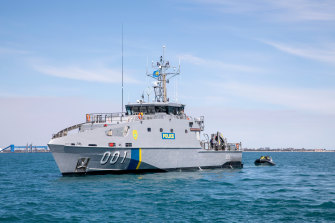 Australia has donated Guardian-class patrol boats to Pacific nations that have subsequently developed a series of problems.Credit:Defence

The decision to give the vessels to Pacific neighbours was originally taken by the Turnbull government in 2016 as part of the so-called Pacific Step-up.

Three significant design flaws have emerged: in February 2021, cracked coupling was discovered between the engine and the gearbox; and in May 2021, the ships’ sick bays proved to have poor ventilation.

At the end of May this year, cracks were discovered in the exhaust, allowing carbon monoxide to enter a compartment that is usually, but not always, uncrewed.

The ship maker has accepted the three issues are design problems, not manufacturing issues, and will bear the cost of repairs.

The carbon monoxide leak is the most serious of the three problems. It is not clear whether the vessels currently in service will be temporarily withdrawn or if there will be further delays delivering seven more boats.

The former government was aware of the issues with the Guardian-class vessels before it left office and as recently as late April, former prime minister Scott Morrison was touting them as proof of Australia’s commitment to protecting Pacific nations’ fisheries and their security.

Defence Industry and Pacific Minister Pat Conroy said the latest issue was another “example of how the former Liberal government was all announcement and no follow through when it comes to important defence projects”.

“We understand how important these vessels are for Australia and our partners in the Pacific. The Guardian class patrol boats play a crucial role in maritime surveillance activities, as well as detecting and deterring illegal, unreported and unregulated fishing.”

Representatives from ship maker Austal and Defence will travel to the Pacific to assess the boats.