Lisa Rinna told everyone to “Google it,” so we did.

She may not be one of “The Real Housewives of Beverly Hills,” but Heather Locklear’s name has been mentioned twice now in relation to one of them in the past week — Denise Richards.

On the final episode of this season’s reunion Wednesday night, costar Lisa Rinna brought up her fellow “Melrose Place” alum during her ongoing feud with Richards.

As Rinna spoke about their friendship deteriorating, she said, “I go back to when she was friends with Heather Locklear.” Denise was quick to cut her off.

“I actually wasn’t, Lisa, and you know that. To bring that up, really?” said Denise, shocked. “She was friends with my ex-husband. Now you’re grasping at straws … really?”

Andy Cohen really wanted to know what Heather Locklear had to do with all this, pressing for more details, but neither would elaborate further. “You know,” Rinna told Andy, “Google it. Just Google it.” Denise was beside herself, telling Lisa, “That is low.”

Well, we Googled it and here’s what we found.

After they both divorced their husbands, Richards started dating Sambora in 2006, which led to a rift between her and Locklear. At the time, however, Denise maintained she and Heather were never that close.

“The thing with Heather, that’s been hard,” she told Entertainment Tonight at the time. “You can’t help who you fall for and that friendship, unfortunately, was done and wasn’t salvageable.”

“People have gone on – ‘Would you date your best [friend’s husband?]'” she added. “You know, she wasn’t my best friend. She was a close friend in the last couple of years. I hadn’t known her my whole life [like people are] portraying this.”

In that same interview, Richards said it was “tough having people think that I’m such a crappy friend” and insisted both she and Sambora were single when they started dating. “We didn’t meddle in marriages and anything like that,” she said.

She went on to say her relationship with Sambora was “the last thing I was looking for” — and later told PEOPLE they bonded over their parents having cancer at the same time. 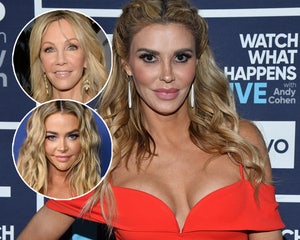 While the two separated in 2007, Richards opened up about the fallout with Locklear even more in 2008 — ahead of the debut of her E! reality show.

“I was no longer friends with Heather months before Richie and I got together. I don’t want to say what caused the split, but she and I weren’t even speaking then,” she told Redbook.

“It wasn’t ever like we’d be shopping and go back to her house and I’d flirt with her husband. Yes, I got together with Heather’s soon-to-be ex-husband, but no, I didn’t have an affair with him,” she continued. “If Heather and I had been friends at that time, I would never have crossed that line. But we weren’t.”

“The friendship was not salvageable, and in the beginning Richie and I just talked as friends because we were dealing with similar situations,” said Denise. “We never planned for anything to happen.”

Looking back, Richards said she did question getting together with Sambora.

“Did I know it wouldn’t go over well? Of course. I’m a grown woman and I know what I did and the repercussions of it,” she said. “I get why the public thinks I’m an awful person who stole someone’s husband. But in my heart, I know I did not break up their marriage.”

She added, “If either Richie or I had felt our marriages were fixable, we wouldn’t have crossed that line.”

While it looks like Denise has said a lot about Heather in the press, there isn’t as much out there from Locklear about Richards.

Brandi Glanville — who was given a cease and desist by Richards after claiming the two had sex on “RHOBH” this season, allegations Denise denies — recently said Locklear reached out to her during an appearance on “Watch What Happens Live.” She further detailed their alleged correspondence in an interview with DailyMail TV.

“During this whole dramatic situation — during the reunion and whatnot, I get an Instagram DM from Heather Locklear who I literally grew up watching on TV and I was kind of starstruck,” the 47-year-old former model explained. “She said thank you with a bunch of hearts and prayers and I wrote back to her. I said, ‘Listen, you know, the truth always comes out no matter how long it takes and that I’m really sorry that you went through what you went through.'”

Brandi asserted Denise now denies ever having a friendship with Heather — the same claim Denise has used against Brandi when asked about the nature of their relationship by the other Housewives.

After Brandi asked Heather if she could share their message exchanges on the “RHOBH” reunion show, the reality star said Heather brought up the fact that Denise recently hit Brandi and Bravo production with cease and desist orders.

“Probably best not to show it because I’ll get a cease and desist, which she sent me years ago. LOL.” Brandi said Heather texted. “I won’t even say anything. I support you fully.”

“I just felt sick, I guess about Denise’s spirit, such a dark place,” Heather reportedly texted Brandi. “So I had to turn it off.”

Locklear has yet to publicly say anything about Brandi, but a source confirmed to PEOPLE that she and Brandi did text.