Inclement weather, a shortage of tradespeople, soaring building supply costs and a brief COVID shutdown: these are just some of the headaches producers had to contend with while filming the new season of The Block. Instead of being asked to make over a single apartment, as in most previous seasons, all five teams were given their own house – each on a 10-acre parcel of land in the Victorian regional town of Gisborne – to renovate and landscape. To qualify for a seven-star energy rating, every home had to incorporate solar panels and batteries, sewage recycling, water tanks and geothermal temperature control. 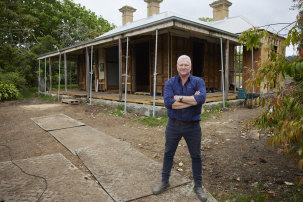 The Block host Scott Cam decided to renovate an 1860s homestead in the 2022 season of the popular reality show.Credit:

Heavy rain turned the site into a mud pit while sub-zero temperatures made it difficult for plaster and paint to dry. Sometimes, contestants worked around the clock to satisfy the show’s strict deadlines. And two days into filming, one couple abruptly quit, leaving producers scrambling to replace them.

All of this meant long hours on set for Scott Cam, the gold Logie winner and former carpenter who has hosted The Block since 2010. Despite already having his hands full, Cam decided to roll up his sleeves and renovate the property’s original building: a dilapidated homestead, built in the mid-19th century and uninhabited since the 1980s.

“Mate, I’ve been doing up old homes all my life,” Cam says, “so when the opportunity to work on an 1860s homestead came up – well, that was right up my alley.”

As the five couples laboured over their respective houses – each one dismantled and trucked in from a faraway location – Cam restored the homestead with the help of former contestants Duncan Miller and Spence Thomson, as well as Sarah Armstrong, director of The Block Shop and wife of the show’s co-creator and executive producer, Julian Cress. While his efforts were not subject to critiques from judges Shaynna Blaze, Neale Whitaker and Darren Palmer, they did serve as inspiration for the contestants.

“I wanted to show them that it’s better to keep things simple rather than packing too much in,” he says. 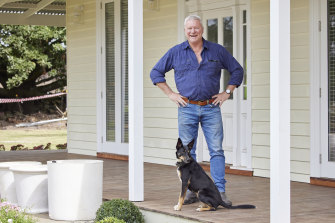 Scott Cam in front of the renovated farmhouse. Credit:

When I ask if this gave him a new appreciation of the pressures his contestants face, he refuses to engage in false modesty: “It didn’t, because I’ve been working to deadlines all my life. I spent 10 years doing that on Backyard Blitz and then Domestic Blitz, as well as the deadlines involved in running my own [carpentry] business.”

“It’s never smooth sailing on any building site,” he says. “Building is all about improvisation. That’s what I love about being a tradie: you strike a problem, you improvise, and then you solve it.”

Later this year, Cam will turn 60, and next year he’ll celebrate a quarter of a decade in television, including a dozen years at the helm of one of Australia’s longest running and most successful reality shows. 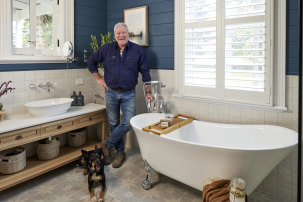 Cam inside the renovated bathroom of the 1860s homestead.Credit:

Now in its 18th season, The Block has aired more than 800 episodes since its debut in 2003. While other reality formats burn bright for a few years before fading rapidly, The Block has been a consistent ratings success for Nine (owner of this masthead), averaging almost 1.45 million viewers nationally in 2021.

“It offers something that people can aspire to,” Cam says. “Even if they can’t afford a house [similar to those on The Block], they might take ideas for their kitchen or bathroom or even a light fitting.”

When Cam was first asked if he’d like to work on television, he dismissed the idea on the spot. It was the late 1990s, and the then-carpenter – who’d become an apprentice at 17 – was in a pub with some mates after work. Television producer Stuart Clark approached him to ask he’d do a screen test for a new show called Backyard Blitz.

“Not really mate, that’s not my go,” Cam told him. Undeterred, Clark jotted down the phone number on the side of Cam’s ute and phoned him the next day. “We’re in your area, we’ve got a crew, let’s just do a screen test,” he said.

Since appearing in the top-rating Backyard Blitz, Cam has starred in several other property shows for Nine, including Domestic Blitz, Renovation Rescue, Our Place, The Joy of Sets and Reno Rumble.

“I’m getting a bit stiff and sore, so I might need to hang up my boots at some point, but I’d love to keep doing The Block for at least a couple more years,” he says. “It all comes down to what the viewers want – and when they speak up, we listen. We have to evolve along with them.”

With thousands of pandemic-weary Australians contemplating a “tree change”, The Block decided to explore the appeal of rural living by filming in the picturesque Macedon Ranges town of Gisborne. A growing interest in sustainable living is reflected in each team striving to make their properties entirely “off grid”, and for the first time The Block features two Muslim contestants, best mates Osman and Omar. 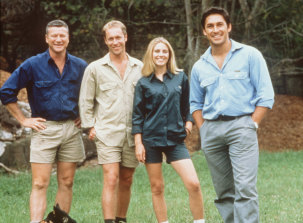 “For the first three weeks of filming, they fasted during Ramadan,” Cam says. “It wasn’t just that they didn’t eat any food, they couldn’t have any liquid between sunrise and sundown either. And yet they were so committed; they had smiles on their faces the whole time and they never whinged.”

When one couple quit two days into filming, Cam admits he was frustrated – but he’s since learnt, via a social media post, that the pair claimed they departed to be with a sick family member.

“They just left in the middle of the night without telling us why,” he says. “But when Bec [a contestant in the 2013 season] lost her mother, we shut down the show for a whole week. Family always comes first on The Block. We’re renovating here, mate, we’re not curing cancer.”

Since The Block first aired almost two decades ago, nearly every subsequent season has been hailed as “the biggest ever” – and Cam believes this year’s instalment easily lays title to that claim.

“In effect, this is ‘The Block times five’ because we had five separate houses,” he says. “I had to be in 10 places at once, all day, every day. It really is The Block on steroids.”

The Block starts on Nine, Sunday, August 7 at 7pm.