Simon Baker is remembering his time at the Garma Festival in a remote corner of Arnhem Land, an annual celebration of traditional cultures that is chock-full of music, dance, storytelling and some great barbecues. It is also a forum for some heavyweight discussions. He was there in 2017, just two months after a meeting of Indigenous community leaders at Uluru had ended with the Uluru Statement of the Heart calling for – among other kinds of recognition – a change to the constitution that would enshrine a distinct place for Indigenous voices in the Australian Parliament. Prime minister Malcolm Turnbull was there. So was Bill Shorten, then leader of the opposition. 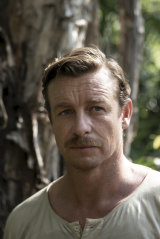 At that point, Baker was hugely famous as the star of American hit series The Mentalist. He had returned to Australia to direct Breath, his adaptation of Tim Winton’s novel about two teenage surfers. “I’d been overseas for 20 years, and I guess that probably heightened my sensitivity to what I was experiencing,” he says. “I watched the Statement of the Heart kind of be pushed away by the prime minister. Then I saw Bill Shorten stand up and speak after him, which I thought was an incredible opportunity for the opposition leader to show some leadership – and he backed away from it as well. That was a really resonant moment for me. It opened me up to wanting to understand and know more about the Indigenous culture in Australia – and made me realise how little I knew.”

Coincidentally, he spotted someone at Garma he hadn’t seen for years: Stephen Maxwell Johnson. Johnson had been the director of photography on a music clip shot in Sydney featuring the young Baker in a supporting decorative role; he remembers picking the young surfer’s face out of a modelling agent’s book of clients. He had since returned to forge a film career in Darwin, having grown up in Arnhem Land, where his father was a teacher in Indigenous schools. “Simon called me from behind,” laughs Johnson. “And the absolute truth is I looked straight at him and said ‘Travis’.” 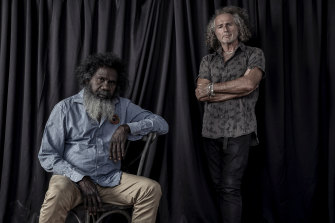 Travis was a central character in a script he had been nursing for two decades called High Ground, about a massacre of Indigenous people by a police patrol in the 1920s. It was taking a long time to get the money to make it; it also took a long time to win the confidence of the people whose story it really was. “Speaking and talking with countrymen takes time and I was very respectful of that process, because it was what was going to be at the heart of the film,” Johnson says when we meet at the Berlin Film Festival. “After a while, time wasn’t really a part of it.” He told Baker about his idea, that it would happen sometime. “And his parting words to me were: ‘Well, look, if there’s anything I can do to help you, I’d love to come up there’.” A year later, he made the call.

'Speaking and talking with countrymen takes time and I was very respectful of that process.' 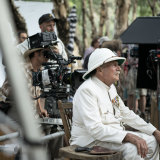 High Ground is a sumptuous presentation of a difficult historical truth: that Australia’s First Nations didn’t cede the country to the invaders; they fought long and hard for it. Jack Thompson, the veteran actor who was the very embodiment of the bush bloke in Australian films of the ’70s – and who plays Travis’s commanding officer, Moran, in High Ground – says white Australians have avoided acknowledging that bloody past. “When I was at school, we were told they all died of bad colds and smallpox and that’s why there were none around,” he says. “But the newspapers of the 1800s talk quite openly about ‘the war with the natives’ and it was only in about the mid-1860s that we stopped reporting it in those terms. And as we came closer to Federation, we really stopped talking about it at all. But it went on. And it didn’t just stop.”

The events in High Ground are real; the characters are composite but, says Johnson, all based on real people. In 1923, former army sniper Travis leads a small posse of white men in pursuit of one man accused of murder; his nervous recruits massacre a whole tribe of men, women and children bathing at a waterhole. Birds wheel overhead; a goanna clings immobile to a tree: it is as if all nature is watching in horror. One child called Gutjuk survives, hiding in the reeds; Travis takes him to the local mission.

Other survivors simply disappear into the bush until, 13 years later, Gutjuk’s uncle Baywara (Sean Munungurr) gains notoriety as the leader of a series of arson attacks on surrounding cattle stations. Travis is recalled from his new life as a crocodile hunter to bring Baywara in, taking Gutjuk, now an adult (Jacob Junior Nayinggul) in the hope that he may be able to help negotiate peace. Not that Travis is optimistic; he never says so, but he may just be looking for the redemption of an honourable death.

Johnson is white – Balanda, as we soon learn to say – but his father’s job meant he grew up among Yolgnu friends; his first feature was Yolgnu Boy (2001). Jack Thompson came up to Arnhem Land to play a police officer in that film too; they have been friends ever since. “I wanted to make High Ground prior to that film, but wasn’t able to,” says Johnson. “People weren’t ready for a story like this – no one wanted to know about massacres.” Most of his work was in documentary and music videos; he became a close associate of the band Yothu Yindi, shooting all their videos including Treaty, and was adopted into the Gumatj clan by the late Mandawuy Yunupingu. 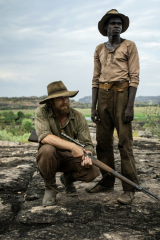 Simon Baker as Travis and Jacob Junior Nayinggul as the adult Gutjuk.

Yothu Yindi co-founder Witiyana Marika is with him in Berlin, having served as cultural adviser and producer on this film as well as playing a strong supporting role as tribal elder and grandfather Dharrpa. Other actors were recruited locally. Jacob Junior Nayinggul is a scion of a Yolngu clan who stepped up to play Gutjuk because, he says, he didn’t want somebody else coming into country to play the part. “The land made me be an actor,” he says. Simon Baker describes him as a natural; it is extraordinary to see the tussle of feelings cross his face as Gutjuk wrestled in the moment with where he belongs: with his mission family, with his rebel uncle, with Travis on the trail or somewhere else in country that will provide peace.

Gumatj leader Galarrwuy Yunupingu has described High Ground as “a both-ways film” in the spirit of Makarrata, a Yolgnu word for reconciliation meaning “coming together after a struggle”. “It’s been gathering momentum, this whole idea of how we have to find balance in this country,” says Johnson. He has tried to find that balance; even the patrol officers are not uncomplicated villains. “We talk about having PTSD when you come back from Afghanistan,” says Thompson. “These guys had come back from World War I. Jesus! And then go out into the world and OK, shit, what are we doing? There’s another war on. That’s who these men are. This brings it right into our age.” Bayara makes his stand in 1936. Thompson was born, as he says, in 1940. “It’s the world of my father!” he says, then repeats himself slowly. “The world of my father!” 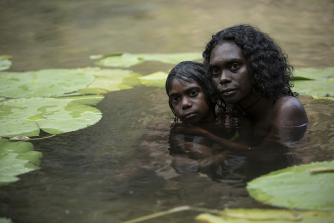 A young Gutjuk (Guruwuk Mununggurr) hiding in a waterhole with his mother Wak Wak (Magnolia Maymuru) during the massacre.

By no means all Indigenous people supported the conclusions of the Uluru statement; many felt it did not go far enough. The same conflict plays out in High Ground, with some Bining-Yolgnu people raring to fight back while others – the wise elders – counsel parleying and caution. “Your anger is all you’ve got,” declares Gulwirri (Esmerelda Marimowa), a young woman who was raped repeatedly as a child by her white boss and who can fell an armed man with one blow of a club. Marika’s Grandfather Dharrpa, by contrast, takes Gutjuk to a spectacular cliff ledge to teach him to listen to the wind, “to Father Sky and Mother Earth. Listen to what she is saying to you. Stay here and protect yourself.”

Makarrata: no more fighting. We’d like to go gently. Is there a way we can deal with it?

What does Witiyana Marika think in real life? “Both, really,” says Marika. “The Whitefella came and tried to traumatise us. Everything hurts; it’s wrong what they did. Gulwirri knows where she’s coming from; she has lived with the massacre, she saw the massacre and it is still in her soul, burning. She’s got that; it’s in her blood.” But he believes in Makarrata. “Makarrata: no more fighting. We’d like to go gently. Is there a way we can deal with it? [As Dharrpa] I want to protect my nation and this is how: no more lightning spear coming in and finishing us, no more men on horses.” 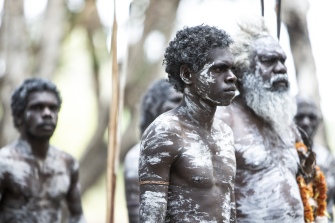 No more: that’s what you think while you watch High Ground. Simon Baker says that going to the Garma Festival “opened me up” but making the film was transformative. “It was far more than the experience I expected. It was profound. It’s hard to even articulate it,” he says. He felt welcomed; he felt privileged. Spending longer in Australia has made him reflect further on the place that forged him. Why don’t we study Indigenous culture as a school subject? he wonders. Why are we so far behind New Zealand or Canada in honouring our First Nations? Why is half of the Northern Territory earmarked for oil and gas exploration when so many communities are enmeshed with that land?

“It’s an interesting thing,” he reflects. “You can be criticised in Australia for even bringing these things up. You can be considered ‘un-Australian’. I think we should have a little more pride and dignity in who we are.” It’s true, he admits, that owning that history isn’t easy; even for him, watching High Ground for the first time was not a comfortable experience. “But to sit in that history, to sit in an uncomfortable space, is a very healing thing for everyone.”