Australia is poised to sign a multi-million dollar deal with a British pharmaceutical giant to purchase and produce up to 30 million doses of its potential COVID-19 vaccine, in an agreement which would also support New Zealand and South Pacific nations.

The Morrison government is expected to sign off on a deal with the British drugmaker AstraZeneca to secure the University of Oxford's adenovirus-based vaccine as soon as the first half of next year. 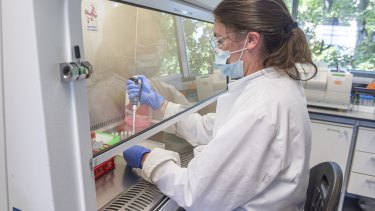 The University of Oxford samples from coronavirus vaccine trials are handled inside the Oxford Vaccine Group laboratory. Credit:AP

The supply pact would allow Melbourne-based domestic vaccine manufacturer CSL to produce the vaccine under a strict licensing agreement if human trials of the drug in Britain prove successful.

Federal Health Minister Greg Hunt said on Sunday he had previously been cautious that attempts to create a vaccine would be successful but the latest expert medical advice was there had been great progress.

He said the government was in "advanced negotiations" with a range of foreign governments and drug companies about securing early access to a vaccine to combat the deadly and highly infectious COVID-19 when it became available.

More than 160 candidate vaccines are in progress around the world, with 29 in human trials, according to a World Health Organisation overview published last week.

AstraZeneca’s vaccine is the most advanced in testing among that group.

The company – which has already signed a handful of support deals with other nations – recently kicked off late-stage testing, and with success, could begin deliveries later this year.

Johnson & Johnson has started human testing on its shot, while the Sanofi/GSK partnership is in preclinical stages.

The Oxford vaccine is due to be manufactured from next month, with a first round of human trials last month showing the shot is safe and induces the strong immune response needed to beat infection.

A final proposal on the Australian deal is expected to go before the federal cabinet "within days", government sources familiar with the negotiations, said.

The federal government has committed $333 million to coronavirus medical research and development, with $256.2 million of that allocated to vaccines.

Mr Hunt said the Russian vaccine was not one of those vaccines being considered at a high level by Australia, as it was “not one who has been recommended” by the expert vaccine panel, with small numbers of people being tested in trials.

“(The vaccine race) has improved to the point that there is a belief that we are far more likely than not to have genuine vaccines than not. It will depend whether it is a full vaccine or a partial vaccine," he said.

“A partial vaccine is equivalent to what we know with the flu, it may need to be updated, it may not provide full protection."

Australia is also expected to short boost its commitment to the World Health Organisation-led COVAX body, which will allow countries to pool funds to access successful vaccines.

Opposition health spokesman Chris Bowen said the government was "very late to the party", with other nations clinching agreements for a vaccine in mid-May.

"There are 20 such agreements around the world already in place which have accounted for approximately three billion doses of the vaccine," he said.