Afghanistan veteran Phillip Thompson says his fellow federal MPs should continue to use the term “thank you for your service” as a show of support to all current and former members of Australia’s defence forces. 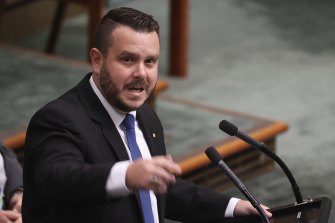 Liberal MP Phillip Thompson says MPs “work in a place that has a responsibility to look after our veterans and their families”.Credit:Alex Ellinghausen

The Age and The Sydney Morning Herald revealed a memo circulated within the department shortly after Veterans’ Affairs Minister Andrew Gee was appointed to the portfolio in August, staff were informed that he no longer wanted the phrase used in press releases, websites or social media posts.

Mr Gee said neither he nor his office had approved the internal memo before it was circulated but added he did not always view the term as appropriate.

He said he suggested to staff the phrase could be used “when it is appropriate” but wanted staff to write more “personalised” responses.

Mr Thompson, the Liberal MP for Herbert in north Queensland, was wounded in action in 2009 when an improvised explosive device detonated within a metre of him.

He sustained severe injuries and was medically evacuated back to Australia. As well as physical injuries from the blast, he suffered from traumatic brain injury and several other life-changing conditions.

He said parliamentarians say ‘thank you for your service’ as an “acknowledgment and a thanking” to all current and former defence force members for their service during a natural disaster, fires, floods, COVID response, or deploying in peacekeeping or combat operations.

“As a soldier, to all our defence force personal current or former, thank you for your service.”

The term, which originated in the United States, has become widespread following the events of September 11 and the Afghanistan and Iraq conflicts. It is routinely used towards American ex-servicemen and women, including in announcements on domestic flights.

It was elevated in Australia by Prime Minister Scott Morrison three years ago when he began regularly using the phrase at public events, speeches and ceremonies, using it alongside recognition of traditional owners of the land and Indigenous leaders.

While ex-service support groups warmly welcomed the elevation of veterans’ awareness to the national agenda at the time, the term has been criticised in some parts of the veterans’ community as “a crass-to-our-ears recent American custom”.

In a combative interview with 2GB’s Ben Fordham on Thursday, Mr Gee said the phrase “can be used when it’s appropriate”.

“I think it’s fine to use as long as it has meaning behind it and it’s not used as a throwaway line,” he said.

“A lot of the correspondence that was being sent out was too bureaucratic in tone, using templates and standard words, and I asked for a more personalised and also compassionate approach to the drafting because it’s gone out in my name.”