In a relatively dark year for the television world, might the return of Dr Jane Halifax be one of the brighter spots?

New series Halifax: Retribution is sequel to Halifax f.p., the popular 1990s series starring Rebecca Gibney as straight-talking forensic psychiatrist Dr Halifax. And while reviving beloved characters can sometimes be risky business, the TV experts on The Televisionaries podcast think it may work. 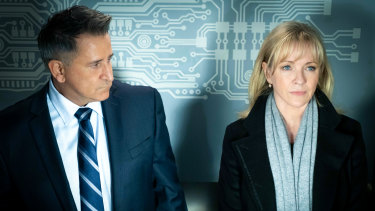 "I think it's a terrific return for the character of Jane Halifax, and a really polished production," says The Guide and Green Guide reviewer Debi Enker. "It's been quite a disappointing year in many ways for local production – I think this is the best one I've seen all year."

Spectrum deputy editor Kylie Northover says the Melbourne-set show (which airs on Nine, the owner of this masthead) brings a new perspective of the city to audiences, with many of the scenes shot from above to complement the storyline of a sniper on the loose.

"It makes the city look quite different," she says. "There's also an eerily prescient thing where there are quick flashes of news reports where the city is locked down. It's quite interesting."

But host Louise Rugendyke, who says Gibney is fantastic in the title role, points out a small wrinkle: if there's a sniper on the loose and Halifax becomes a potential target, why is she moved into an apartment with huge glass windows?

"I did wonder about that," Northover says.

Later in the episode, the experts discuss whether or not Australian free-to-air channels should be obligated to make local drama; play a couple of rounds of regular game Credit Where Credit's Due; and take a look back at British cop show Prime Suspect.

Listen to the new episode of The Televisionaries in the player above, then hit subscribe at the link below. Previous seasons have featured discussions about why I’ll Be Gone in the Dark is so addictive, the strange sci-fi series that was one of the best shows of the year so far, and why hype can be a death knell for new programs.