On Monday night, Q&A set out to answer the biggest of questions: What will become of us?

The answers were not always comforting. This “Future Alert” edition might have been better billed as “Future Alert and Alarmed”, given the stakes for humankind as presented early on.

There were no politicians present trying to flog us their particular brand of rose-coloured glasses. No one said things like, “How good is the future, mate?”

Instead, with host Annabel Crabb declaring that in the absence of politicians “we can talk about them behind their backs as much as we like”, that’s what happened. And some of it wasn’t pretty.

Julian Cribb, author of Surviving The 21st Century, set the scene with the panel’s consensus view that we are at the mercy of diabolical short-term thinking. 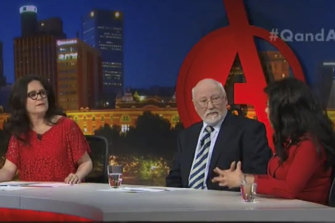 “At the moment we're not recognising the real nature of the threats that we face, the scale of them, the magnitude and the fact they're all coming together at the one point,” he said.

But wait, there was more! And it was on the bright side!

“There is a good news message out of this. There are fantastic solutions,” he said.

But before we delved further into the bright side, it was over to panellist Chloe Spackman, from the Australian Futures Project, to confirm the dark.

“It's about power, not about leadership … I don't necessarily just mean some of the potential catastrophes that Julian speaks of. But I even mean some of the critical issues … things like tax reform or the gender pay gap or Indigenous disadvantage. These are the things that we're not making progress on. We're in the short-term bubble.”

What is the way out? Creative thinking. Innovation. Collective will. Seeing opportunity instead of peril.

But as seen by John Hewson – billed as a “politician turned thought leader” – Australia is cursed by “taking things for granted. We just assume we've been able to eat this well or live this well for as long as we have and we assume that will continue. We don't want to face the reality that there are challenges … that are very real”.

“Short-termism crowds out all the detail we should be looking at,” he said.

The panel discussed the potential and pitfalls of Artificial Intelligence.

Futurist Jordan Nguyen spoke of “the fourth industrial revolution … [where] we very much integrate with the technologies around us”. 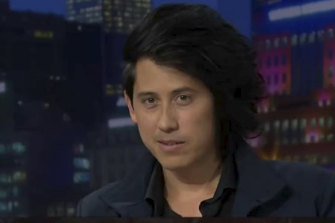 We needed to rewrite the narrative set for us by science fiction.

“We used to have a clear distinction between reality and science fiction,” Nguyen said.

“Over time all these technologies started making their way into the real world. All these things took over humanity in some way. In science fiction we should treat it as a bit of a warning sign. We need to rewrite a better future where these technologies are utilised for good human purposes.”

The panel discussed the role of fear in motivating or frustrating change.

Crabb: “Recently the PM said he didn't like Greta Thunberg and the way she spoke because it was frightening for children. How do we handle that?”

Julian Cribb: “I don't believe we should be scaring kids, but I do think we should be informing them … as far as I can see Greta Thunberg and the rest are already on to that and they are going to change the world whether we like it or not. I think they're embracing the risk and they're looking for the solutions.”

“That's where I think the Greta Thunbergs and my kids for example see what's wrong with us. They see we've missed the point … as soon as they vote, you'll have a very different world”.