The new United States ambassador to Australia, Caroline Kennedy, says she wants to strengthen peace in the Indo-Pacific and support the global transition to green energy in what she says is a critical time for both countries.

The daughter of former US president John F Kennedy, and the US ambassador to Japan during Barack Obama’s presidency, is due to arrive in Australia on Friday. 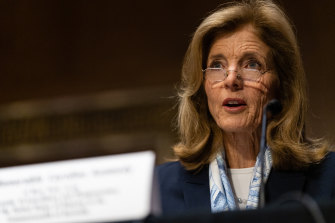 The new US ambassador to Australia, Caroline Kennedy.Credit:Bloomberg

In a video message broadcast online on Wednesday, Australian time, Kennedy spoke of the shared military history of both countries, and her own familial connection to conflict in the region.

“I know that our countries are the strongest of allies and that our parents and grandparents fought side by side for more than 100 years. Their sacrifices have made it possible or us to live in two of the world’s greatest democracies,” Kennedy said in the address.

“In 1943, my father’s PT boat was sunk by a Japanese destroyer. If not for the help of two Solomon Islanders and an Australian coast watcher, he and his crew would not have survived.

“He wanted to be the first sitting president to visit Australia, so I’m honoured to carry his legacy forward in my own small way.”

Kennedy added she had fallen in love with Australia during previous visits and looked forward to learning about First Nations culture and traditions, the natural environment and abundant natural resources.

“When my husband and I got married 36 years ago, we came to Australia on our honeymoon. We always dreamt of coming back,” she said.

“We brought our three children in 2014. We fell in love with the people we met and the places we went, and I can’t wait until my new grandson comes to visit.”

The new ambassador says the bilateral relationship has reached “a critical time in history” as the two countries battle climate change and increasing volatility in the Indo-Pacific.

“What we do together in the next few years will determine the future of the region and the planet,” she said in the message.

“I look forward to working closely with Prime Minister [Anthony] Albanese, Foreign Minister [Penny] Wong and the government to advance our shared democratic values, strengthen our commitment to a healthy, peaceful and prosperous Indo-Pacific and advance the transition to a green energy world,” she said.