American Utopia is more like a barefoot tent-show than a concert film. David Byrne gives us a revival meeting dressed up as avant garde theatre, on a bare cube of stage, hemmed in on three sides by a fine chain-link curtain. The politics may be modern, with mentions of Black Lives Matter and climate change and voter registration, but the method is olde-time American razzle-dazzle. With Spike Lee in control of the cameras, it becomes a joyous piece of … let’s call it musical theatre, although that hardly seems to encompass it. 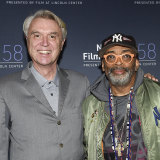 Shot at the Hudson Theatre on Broadway before COVID-19, Byrne offers a modified version of his album American Utopia, with a good helping of Talking Heads hits. He brings on musicians one at a time – as he did in Stop Making Sense, the 1984 documentary that redefined the live concert film. In that one, roadies moved drums and amps and percussion onto the stage after the show had begun, so that it took about four songs before the whole band was assembled.

It brought the bones to the fore: you could see how a song and a band was built, from raw sounds. The big rock bands used millions of dollars worth of artifice, lighting and smoke. Talking Heads were more punk than rock in that sense, but more art school than either. Byrne met co-founders Chris Frantz and Tina Weymouth at the Rhode Island School of Design in 1973. Byrne thought as much about the big suit he would wear in the film as the staging. The suit became famous, like his arm-chopping movements during the hypnotic lyric: “Same as it ever was … same as it ever was …”

That film was mesmerising, a road map to the digital future. Surely he could not do anything as good this time, 36 years later and without the Heads? I’m here to say yes, he can. American Utopia is so good, I wanted to turn around and watch it all over again. It made my heart soar and my feet stomp. I’ve always thought Byrne a bit of a show pony – enormously talented, but a little too full of himself. I was wrong: he is the complete show pony, but what a show. And with age, he has acquired a certain humility and generosity, sharing the limelight here with 11 talented musicians from around the world – Brazil, France, Canada, Chicago, New Jersey. 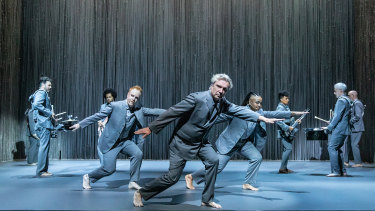 He reverses the idea of the original film. This time, there are no fixed trappings of a band – no amps, no drum kit, no mic stands, no wires. Everyone carries their instrument, even the keyboardist, and everyone dances. There are four or five drummers, not just one, splitting the kit so the players can move, like an American marching band.

It’s the right film for the times, a blast of joy and high spirits. As Molly would say, do yourself a favour.

The whole show is choreographed within an inch, each musician taking his or her place in a crafty design that makes full use of the enclosed cube of stage. The lighting is intricate and timed to the millisecond. It’s a clockwork performance, without tape loops or stage tricks. What we hear is played live, as Byrne demonstrates, building a song voice by voice, to show how good the band is. Bassist Bobby Wooten and guitarist Angie Swan had me transfixed.

Byrne is sometimes at the centre of it all, his arms outstretched like a preacher. At other times, he’s at the back, letting the others strut. His songs are heavy on traditional American forms – notably call and response. His structures may be unconventional, but he synthesises a lot of traditions, not just American ones: lyrical pop, Brazilian funk and groove, the Broadway songbook and a dollop of Motown. It’s a heady mix, delivered with humour and verve.

Spike Lee’s direction is unobtrusive. Byrne’s show was already highly developed for the proscenium stage. Lee adds aerial views, Busby Berkeley-style, to give it an extra dimension, but otherwise, he lets the performers carry the weight. We come to see each of them as an individual, which is remarkable when there are 12 people on stage, most of the time. It’s the right film for the times, a blast of joy and high spirits. As Molly would say, do yourself a favour.