Celebrity couples aren’t like regular people. When a regular married couple split, their close friends might be sad, but when a famous couple splits, their entire fandom grieves. And, in the throes of grief, the public want answers.

What happened, Brad and Ange? Why did you split, Justin and Selena? What went wrong, Ben and Jen (G)? We are baffled and heartbroken and we need to know! Even if the eventual “reason” for the split wreaks of inauthenticity, we readily accept and move on. They aren’t like regular couples, after all, so why should we expect to see ourselves in them? 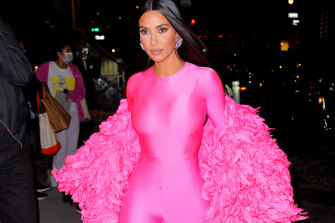 Kim Kardashian West at the Saturday Night Live after party this week.Credit:Getty

Enter Kim Kardashian West on Saturday Night Live, and, suddenly, we have a new Celebrity Split role model. In her opening monologue, KKW addressed her ex-husband, Kanye West, who accompanied her to the taping and was sitting in the front row.

I married the best rapper of all time, she said. Not only that, he’s the richest Black man in America. A talented, legit genius who gave me four incredible kids. So, when I divorced him, you have to know it came down to just one thing: his personality.

Kardashian West is about as constructed and filtered a celebrity as one can get. And yet in that moment, in her scripted monologue, she managed a moment of truth. Divorce is rarely all moonlight and roses, with a couple ecstatically uncoupling as a celebration of their love. And it is rarely unmitigated hatred, even in most bitter of splits.

In recent years, celebrity breakups have followed a predictable formula. An announcement is made on social media and a joint statement is issued, in which the divorcing couple assure us of their ongoing love and admiration.

Despite a deep love and respect for one another, we have realized that our current paths have taken us in opposite directions, wrote Kaley Cuoco and Karl Cook last month, in a textbook marriage obituary.

And sure, some regular people who divorce do love and respect each other, and kudos to them. But mostly? At least one party is enraged, hurt, betrayed, devastated, disdainful, fed up, or just plain out of love with the other person. That is why they’re getting divorced.

Sometimes, the celebrity statements are so rhapsodic they read more like engagement notices.

Our hearts are full, as we have never been so enamoured and deeply grateful for one another as we do in this decision to separate, wrote Kate Bosworth in August of her split with Michael Polish. Now, famous people are different to regular folk, but this seems far-fetched even for a celebrity. I’ve met scores of divorced people over the years, and I can say with considerable confidence that none divorced when they were at the peak of their love.

For most of us regular folk, divorce is messy and complicated with highs and lows, just like a marriage. It is remembering the good qualities you once admired in your ex, whilst acknowledging all the bad. It’s honouring the fact that you once loved each other, whilst recognising that you can’t live with them for another day. It’s taking them with you to Saturday Night Live and having them watch proudly from the front row as you tease them in front of the world.

OK, so that last one is just the celebrity couples. They really are different to us.