One Nation leader Pauline Hanson wants a complete overhaul of the retirement system and flagged she could be convinced to support delaying the legislated increase in superannuation payments.

Compulsory superannuation contributions are legislated to increase incrementally from 9.5 per cent to 12 per cent starting from next year, which would add up to $20 billion a year to superannuation funds to assist workers in retirement, but there's a firestorm of speculation the government could delay the rise. 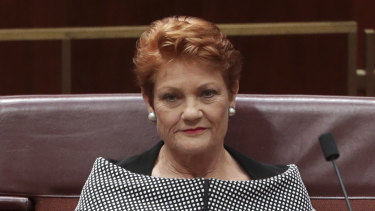 Senator Hanson potentially holds a critical vote over the future of the super guarantee, after Centre Alliance Senator Stirling Griff and One Nation Senator Malcolm Roberts both told the Australian Financial Review they would back delaying the rise.

Labor has warned the government might backflip on the currently legislated increases, which would require support from three crossbench senators, and Assistant Minister for Superannuation Jane Hume said on Monday there was a trade-off between wage growth and a higher super contributions.

Senator Hanson said "our whole superannuation has been an absolute mess", but had not decided on a firm position over the superannuation guarantee as she was yet to speak to interest groups like the unions.

She is concerned workers needed cash in their pockets during the coronavirus recession.

"It's really the lowest income workers doing it tough … [and] have the cost of living rising," she said.

Senator Hanson also said the Australian superannuation system should be more like the UK pension scheme, which includes a state pension and an earnings-related pension.

She warned those who reached retirement age were taking a lump sum out of their super, using it to pay down their mortgage or go on holiday and then claiming the age pension. A retiree's home is typically not counted as part of the the assets test.

"The whole scheme was set up to stop people going onto the pension, which we will not be able to afford in time to come."

The Australian Council of Trade Unions president Michele O'Neil criticised Senator Hume on Monday for being "out of touch" with workers and urged her to commit to the increase in super payments.

The federal government is yet to release a 650-page report into the retirement sector, which looked at superannuation, pensions and voluntary savings.

The now-independent Senator Rex Patrick said his current position was the legislation to raise the super guarantee should not be changed.

"If the government wanted to delay they would have the burden of convincing me that is the proper course of action," Senator Patrick said.

"There are a whole lot of things we can do to stimulate the economy, it doesn't have to be a cut [in super plans] particularly at a time where we have low wages growth and people have already had to raid their super," he said.

The most important news, analysis and insights delivered to your inbox at the start and end of each day. Sign up to The Sydney Morning Herald’s newsletter here and The Age’s newsletter here.