Giving cash handouts to encourage vaccinations could save thousands of workers from joining the unemployment queue with new modelling showing one job will be saved for every nine people who get immunised.

Academics and leading economists are backing cash payments to encourage a higher rate of immunisation across the country following an analysis from Deloitte Access Economics calculating tens of thousands of jobs would be lost in each week of extended lockdowns in Greater Sydney. 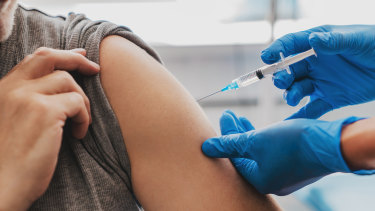 Cash incentives for jabs could save jobs.Credit:iStock

Deloitte partner Chris Richardson said increasing the rate of vaccination was critical. His analysis shows there could be good reason to introduce financial incentives such as Labor’s proposed $300 direct payment for those fully immunised by December 1.

“There’s a case for carrots of the kind that Labor is talking about,” Mr Richardson said. “But to get the biggest bang for the buck they’d be best focused on speed and where we have the available supply – the next few weeks and AstraZeneca.”

But he said the real key here would be the “sticks” or punishments that would eventually be needed to get more people vaccinated.

“Good cop is easy, but bad cop will be necessary. That’s really tough in a democracy,” he said. “But Delta is so infectious that the decisions of individuals not to get vaccinated come with massive downsides for everyone else. So community rights have to temporarily trump individual rights.”

AMP Capital chief economist Shane Oliver said boosting incentives, such as cash payments or a lottery, was a good option.

“It will save jobs. I calculated $14 billion in lost economic activity as a result of the lockdowns,” Dr Oliver said. “On a cost-benefit basis if we can even spend a few million or a billion [on cash handouts] to prevent lockdowns it makes sense.”

He said incentives should be used as quickly as possible, with a stick approach used later such as limiting freedoms for those who are yet to get vaccinated.

Stephen Whyte, a Queensland University of Technology postdoctoral research fellow in behavioural economics, said financial incentives were a great idea that should already be in place.

“We haven’t had a cash incentive yet but we should’ve started with it. There’s a large proportion of people who would respond to it,” he said, noting this would include lower socio-economic groups that were more likely to be hesitant about vaccines.

“The issue is there’s different segments in the market disincentivised for different reasons and to get to herd immunity we need a mixed approach in our incentives to reach all these different groups,” he said. “Offering people money to do things [still works] … people are incentivised by remuneration.”

Melbourne Institute of Applied Economic and Social Research professorial fellow Anthony Scott said research he undertook in 2008 found incentives for national vaccination programs could be worthwhile in hard-to-reach areas, and there was recent evidence cash worked better than lottery-style draws.

“Cash is good for one-off behavioural change,” he said. “There are two kinds of people – those who are unsure and waiting, and they are most likely to be affected by this, and those hardline against vaccinations are less likely [to be encouraged by a cash incentive].”

His research from Taking the Pulse of the Nation shows about 15 per cent of the population is uncertain about vaccines, with about 10 per cent unwilling or opposed.

“It would be much better if it was targeted at those population groups and geographic areas where we need vaccination rates to go up,” he said, adding these schemes could be expensive if applied too broadly.

Westpac chief economist Besa Deda said Australia was prone to lockdowns to contain the virus due to having one of the lowest shares of the population fully vaccinated in the OECD.

“There is a place I think for incentives to be offered to lift the vaccination rate so as to limit the need for lockdowns and the rise in hospitalisation rates,” she said.

However, she said a core issue was the low supply of Pfizer and the reluctance of some groups to take AstraZeneca.

“Supply is meant to improve, particularly from this month. If the forthcoming lift in supply does not lead to a significantly higher share of the population vaccinated, then I think there is a much stronger case for incentives to be used.”

The Behaviour Change Collaborative managing director Luke van der Beeke said it would be difficult to measure the effectiveness of financial incentives as there were many variables at play.

“A $300 [incentive] might increase the speed of uptake amongst those already inclined to get the jab but may have little if any impact on those who currently don’t intend to get vaccinated,” he said.

“Financial incentives tend to be most effective where the behaviour being sought is a one-off. This is where it could get tricky. While we need to get people fully vaccinated as quickly as possible, we will likely need to get regular jabs as we learn to live with COVID in the long term.”