Ant McPartlin, 43, and Declan Donnelly, met with their adorable canine counterparts for the Pups to Partnership campaign which is aimed at raising funds for more guide dogs in the UK.

Ant, 43, whose puppy was a Yellow Labrador, and Dec, 44, who was presented with a Golden Retriever, were left gushing as they met the playful puppies who are embarking on a journey to become life-changing guide dogs. 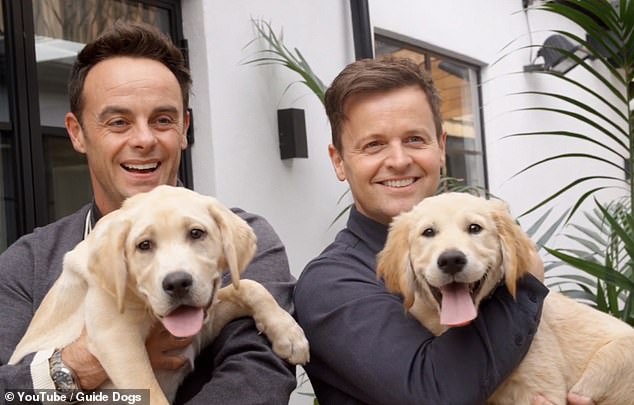 Ant McPartlin, 43, and Declan Donnelly, 44, have had a Yellow Labrador (left), and a Golden Retriever (right),named after them as part of the Guide Dog’s Appeal’s Pups to Partnership campaign 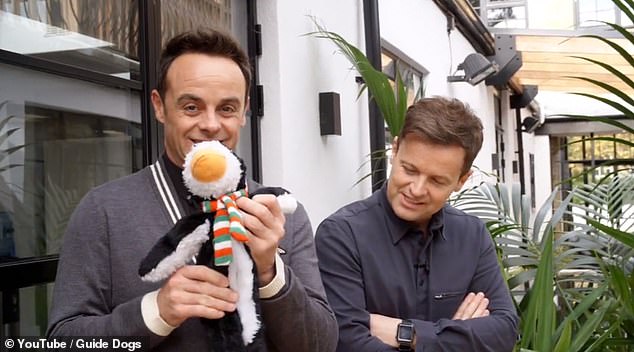 Before meeting their canine counterparts, the Britain’s Got Talent presenters were seen waiting outside 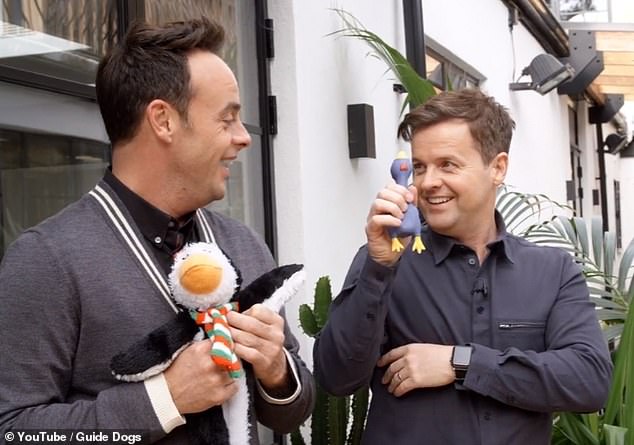 The Britain’s Got Talent presenters Ant said: ‘We’re so proud to be part of the Pups to Partnerships campaign; not only do we get to meet these adorable puppies but we also get to hear about the great work that Guide Dogs does.’

Meanwhile Dec added: ‘These puppies will go on to change lives and give two people living with sight loss the independence and freedom we take for granted; we can’t wait to see how these puppies progress.’

During their heartwarming meeting, the presenters were seen excitedly waiting outdoors for their canine counterparts to make an appearance.

Armed with a fluffy penguin toy for his dog, Ant told the cameras: ‘So we’re just about to meet puppy Ant and puppy Dec. I’ve got puppy Ant’s favourite toy.’ 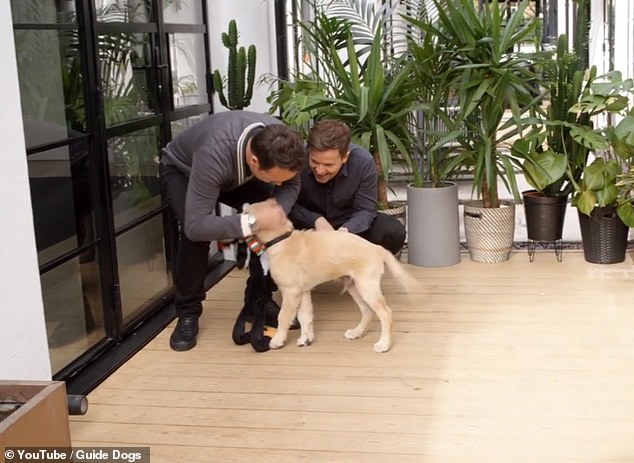 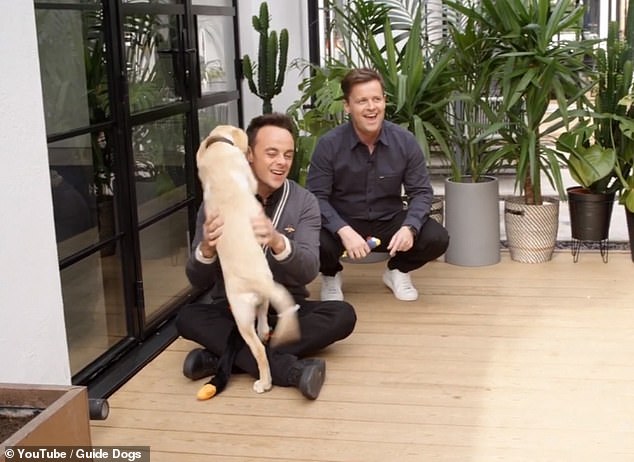 The presenter then turned to his best friend stood beside him and asked: ‘You got puppy Dec’s favourite toy?’ to which Dec responded by pulling out a small squeaky chicken toy from his pocket.

As the young dogs ran outside to greet the presenters, the two men were left gushing at their playful behaviours.

However, Dec was left struggling to control his excited pup and later explained to his best friend that the reason for that may have been due to his dog hailing from a different stock. 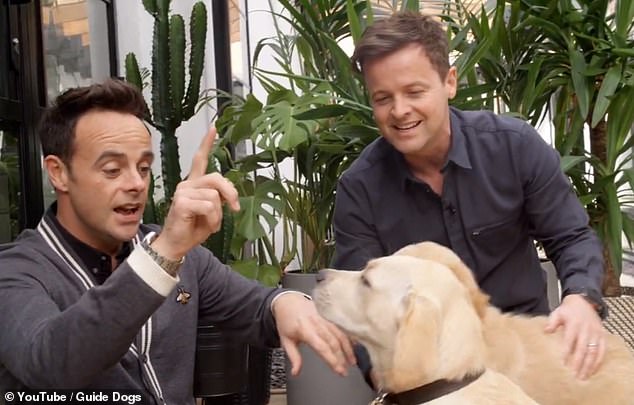 Ant immediately set about trying to train his adorable dog and offered the command: ‘Sit!’ 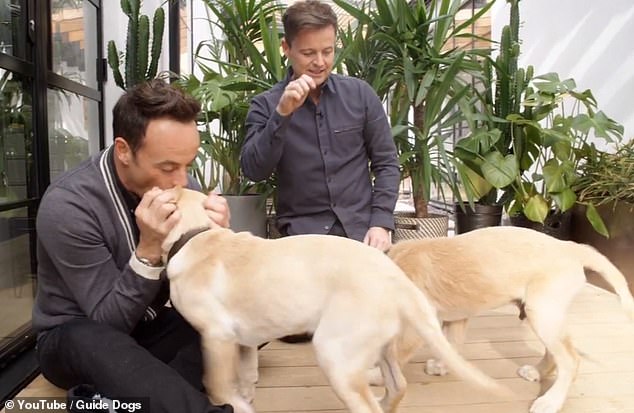 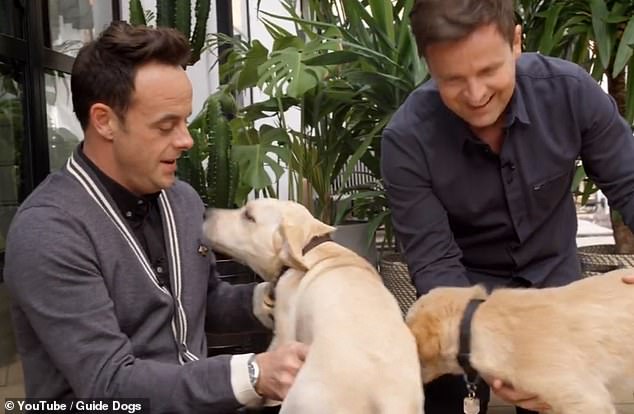 He later told Ant: ‘Do you know there’s a slight difference between them. The stock their from. Declan is from breeding stock so he is a bit of a stud.’

The dogs, who are currently being raised by their Puppy Walkers, volunteers who act as canine foster carers for guide dog pups, will be followed by the public as they embark on their journey to become guide dogs for those living with sight loss.

Ann Bradford, Puppy Walker for puppy Dec said: ‘Being a puppy walker is about so much more than walking the puppy, although this is a particularly enjoyable part of the job! It is incredible to be able to give a puppy its first sense of home, nurture its character and help to develop its skills, all the while knowing it will go on to change a life.’

The Guide Dogs Pups to Partnerships Appeal is taking place from October 1-31 and is hoped to give those living with sight loss in the UK the chance at an independent life. 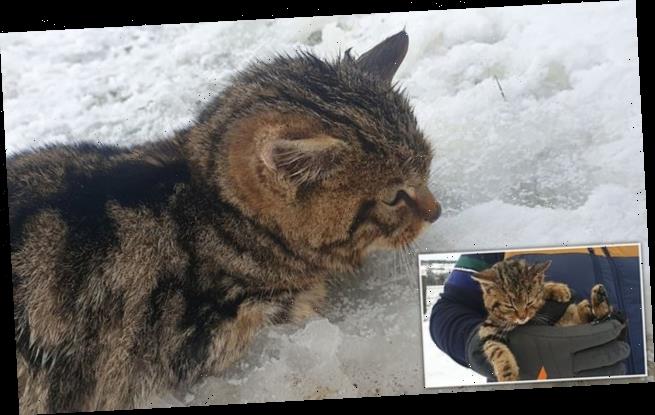