Art Gallery of NSW is moving towards gender parity among its local art acquisitions following the adoption of policies giving greater consideration to the works by women artists. 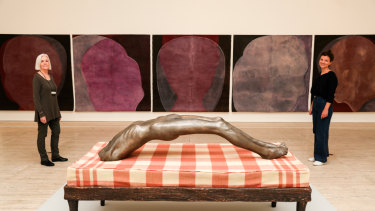 Four years ago the gallery amended its international acquisition policy, making it a priority to develop a stronger contemporary Asian and Pacific collection, including the art of New Zealand, and a stronger collection of modern and contemporary women artists.

Here we are, an exhibition of 22 female artists, showcases works mostly acquired under the revised guidelines, among them Justene William's Insight, featuring an assemblage of mismatched mannequins and random parts, Louise Bourgeois's Arched figure and Judith Wright's Significant Others, a series of head-like forms marking her return to painting after a ten-year break.

The gallery’s first solo exhibition by an Australian artist was a memorial display of three paintings by female artist, Adelaide Ironside, at Clark’s Assembly Hall in 1877, the first of several.

In 1946 the first all-women exhibition at the gallery was held. There have been several major surveys since, including Fearless in 2018, the gallery's first show dedicated to South Asian women artists.

An upcoming exhibition will unpack the story of Dora Ohlfsen, one of the world’s most highly regarded sculptors and designers of medals and medallions, who was asked to submit designs for a frieze at the gallery's entrance. Her chariot race in bronze was subsequently rejected.

Wright considers herself lucky, having fallen into a successful art practice after a career as a dancer in the Australian Ballet.

Teaching at an art school 15 years ago, she observed the ''amount of male students who went on to have a significant career far outnumbered the women''. Only then did she realise that an equity problem existed in the visual arts. ''I've been sheltered from it in my own life,'' she said adding exposure and reputation were mutually dependent.

Curator Lisa Catt said the show's grouping spoke to gender representation in the gallery's collection but also to the female experience and the nature of human relationships. The show's title could also be interpreted as a statement of artistic purpose that acknowledged how the artists used their medium to stake out a place for themselves in art history.

Recognition of the underrepresentation of women is also reaching the commercial gallery sector with Australia's only commercial art gallery dedicated to showcasing the work of contemporary women artists to open in Melbourne on Thursday.

The Finkelstein Gallery in Melbourne is believed to be only the second commercial gallery to dedicate its program solely to the talent and careers of emerging female artists.

Elvis Richardson, an author of the Countess Report, an independent artist-run initiative that publishes data on gender representation in the Australian contemporary art world, said the new gallery would fill a ''classic gap in the market''.

The 2014 Countess report found that while women made up 75 percent of art school graduates they were only 34 percent of artists exhibited in state museums and galleries and 40 percent in commercial galleries.

''It goes back to the education of artists in my opinion,'' Richardson said. ''Twenty-five percent of the graduates are men and they are getting 60 percent of the opportunities.''