Dominic Perrottet might have thought he was just playing when he wore a Nazi uniform to his 21st birthday party, but he was playing with fire. It’s the fire that’s once again threatening to consume human liberty worldwide.

Fascism is not the exclusive preserve of Hitler and Mussolini, and it is not safely bottled in the formaldehyde of history. It dresses in a variety of forms, and it is today enjoying a great revival. 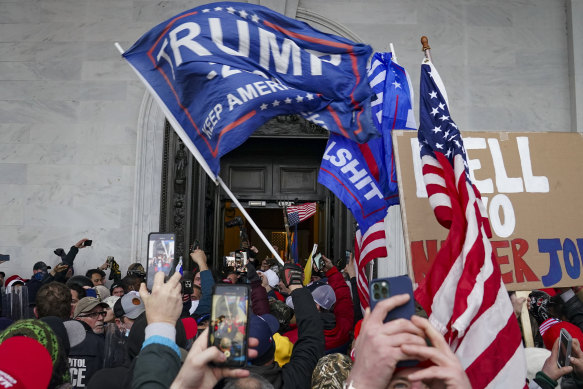 Rioters break into the Capitol in Washington on January 6, 2021: one of three attempted violent coups by far-right forces in Western democracies over the past two years.Credit:AP

Far-right forces have attempted violent coups against elected governments in three of the world’s most important democracies in the last couple of years: the January 6 attack on the US Congress in 2021; the plot against the German state to install a prince as dictator, foiled last month by a mobilisation of 3000 police; and now the attempted violent shutdown last week of Brazil’s parliament, presidency and supreme court.

These are not ragtag failed states. Each of the three nations is the dominant power in its continent. In all three cases, the democratic order prevailed, but the antidemocratic movement lives on and a threat remains.

Brazil’s legitimate ruler, the newly elected president, known universally as Lula, has spoken of his concern that the security forces have been infiltrated by undetected violent extremists. “How can I have someone at the door of my office who might shoot me?”

The resurgence of fascism worldwide is a shocking lesson. Human liberty was almost extinguished in the 1930s and 40s – at its darkest, a mere 12 democratic nations survived to wage the heroic fightback against international fascism. But it turns out that it was not defeated, merely suppressed. 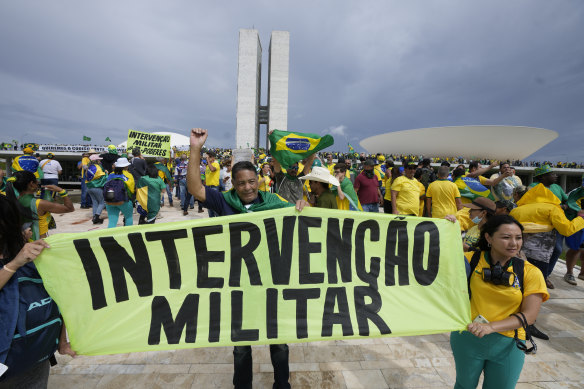 Supporters of Brazil’s former President Jair Bolsonaro, hold a banner that reads in Portuguese ” Military Intervention” as they storm the National Congress building on January 9.Credit:AP

But it couldn’t happen here, right? Fascism is something that happens elsewhere, surely? Don’t be so sure. It came pretty close to happening in Australia. In fact, the New Guard paramilitary group in Sydney – under the leadership of World War I veteran Eric Campbell – was planning a violent coup against the NSW government in 1932.

The New Guard, which has been dubbed a “secret army”, was only one of the fascist groups that sprang up around Australia in the interwar years just as fascism was building strength around the world at the time. Victoria had its “White Army”, for instance, later becoming the League Of National Security.

But the New Guard was the biggest, with a peak membership of about 50,000 men, many of them – like Campbell – returned World War I servicemen. At the time, NSW Police had fewer than 2000 men.

The New Guard planned to install machine gun nests around the NSW Parliament to hold the captured building against an anticipated counterattack by the police, as set out by historian Andrew Moore, an associate professor at Western Sydney University, in his contribution to a new book, Histories of Fascism and Anti-Fascism in Australia, published last month. 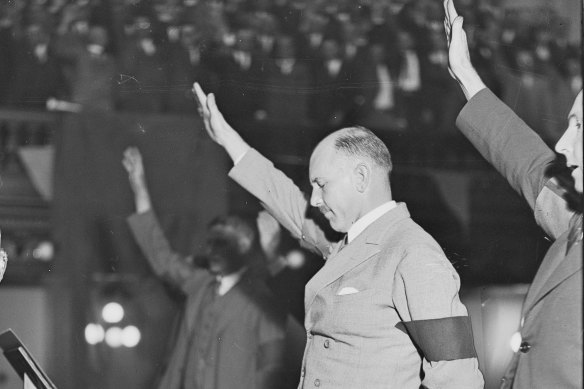 Leader of the New Guard fascist group Eric Campbell making what looks like a Nazi salute in Sydney in December, 1931.Credit:

One senior New Guardsman later recounted that “we were definitely prepared for civil war”. The police and New Guard knew each other well; they’d clashed in a series of skirmishes and street fights as the paramilitary gangs in their hundreds attacked unionists, broke up strikes and disrupted meetings of the Communist Party.

The police had infiltrated the group and were prepared for its attempted coup. They planned to defend the parliament with howitzers at the ready, no less. The acting superintendent of the Metropolitan Police, the notoriously violent “Big Bill” Mackay, issued orders to his force to “go out there and belt their bloody heads off”, as Moore describes.

The coup attempt never came. The New Guard’s biggest target, the Labor premier of NSW, Jack Lang, was sacked by Governor Philip Game over the state’s fiscal crisis. The New Guard lost its momentum and many of its members.

If this is news to you, you’re not alone. “Most Australians probably wouldn’t know about the 1930s” and the local fascist movement, says the co-editor of the new book, Evan Smith, lecturer in history at Flinders University. “It’s always just seen as cranks, fringe, and that’s just ignorance.” 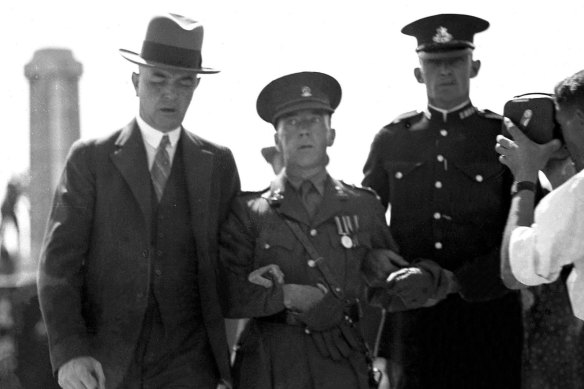 The arrest of Francis De Groot, a member of the fascist New Guard, after he upstaged NSW premier Jack Lang at the opening of the Sydney Harbour Bridge in March, 1932.Credit:SMH Archives

The only well-known scene from Australia’s fascist history is the moment that a New Guard member – Captain Francis de Groot – charged on horseback at the opening of the Sydney Harbour Bridge in 1932. He upstaged Jack Lang by using his sword to cut the ceremonial ribbon before the premier could. The New Guard considered Lang unworthy of the honour.

Smith says this is “seen as Australia’s fascist moment”, a tiny surviving fragment of an overlooked history. “Even if the fascists in Australia weren’t challenging for power themselves, their violence and intimidation of unionists and communists was very real. The New Guard kidnapped communists. What they were doing was akin to what the Ku Klux Klan was doing during Reconstruction” in the US.

Yet for all its fascination, despite its potential as an object lesson – and in spite of the good work of many historians to tell our story – it’s almost as if Australia’s “secret armies” are kept a secret history. My copy of the weighty Oxford Companion to Australian Politics, for instance, contains no entries on fascism or anti-fascism, or the New Guard, or even far-right or extremist movements.

Moore says it’s an “inconvenient” reality for the “preferred historical narrative” of Australia as a relaxed and comfortable country that avoided political extremism.

The young Perrottet had no excuse for making light of Nazism, but he got one thing right this week. He says he’s committed to better education about the atrocities of the past. That must include education about anti-Semitism, but should also teach the broader history of fascism, at home and abroad.

Because we can’t leave the struggle against fascism to ASIO and the Federal Police. ASIO chief Mike Burgess last year said that right-wing extremists had accounted for 16 per cent of the agency’s investigative caseload three years ago but reached 40 per cent last year.

“It’s the extent of what we’re seeing that’s the difference: more people interested in it, more activity.” Most of ASIO’s priority counter-terrorism cases at the end of last year were investigations of people under the age of 18, he said.

“As a nation, we need to reflect on why some teenagers are hanging Nazi flags and portraits of the Christchurch killer on their bedroom walls and why others are sharing beheading videos,” said Burgess.

The task of preventing radicalisation was one for parents, schools and community leaders, he said, not ASIO: “We do not belong in the classroom.” But with state governments responsible for schools, Dominic Perrottet, you do.

More from our award-winning columnists

The Voice needs more detail: Australians will vote this year on whether to support an Indigenous Voice to parliament – but there are three questions that need to be answered. Fast – Parnell Palme McGuinness

The Voice is not about the detail: Australians are not “voting blind” in the Voice referendum. They will be voting on the basic principle – giving Indigenous Australians a collective Voice to seek to influence and inform the parliament and government by making representations to them – Anne Twomey

Future shock: Australia has a global reputation for being able to read the future when it comes to political shifts. What shift are we signalling to the world now? Is it a move to a more inclusive democracy, with a focus on meaningful issues rather than phoney wars? – Nick Bryant