The Andrews government is a thorn in flower wholesaler Tony Pavlou’s side after he was left with $200,000 of premium red roses due to Victoria’s snap lockdown over Valentine’s Day.

Mr Pavlou, owner of the Australian Flower Group, had imported 2.5 tonnes of the roses from Ecuador and Kenya, which trebled in price on the industry’s most profitable day of the year.

“They are just sitting in their boxes, we don’t know what we’re going to do with them,” he said.

“They’ve got a limited lifespan and they are probably worth now 25 per cent of what they were.”

Premier Daniel Andrews admitted during last Friday’s press conference to announce the lockdown that he had not considered the $36 million of flowers sold on Valentine’s Day in the state each year.

Mr Pavlou’s roses were to be used at events that were cancelled, or sold on to florists that no longer needed the stock.

Flower Industry Australia chief executive Anna Jabour called for florists to be reclassified as fresh produce and said government support would be critical for their survival.

“It is very unlikely that profit margins were met. We have been a forgotten trade for too long,” she said.

Ms Jabour said although florists had received an influx of online orders, extra staff were required to provide click-and-collect deliveries.

“Greengrocers and supermarkets were allowed to stay open and the flowers at most of their stores flew off the shelves.”

Meanwhile, cafes and restaurants may not have every meal on their menus available on Thursday, with less than 24 hours to stock up after Mr Andrews’ announcement on Wednesday of the snap lockdown’s end. 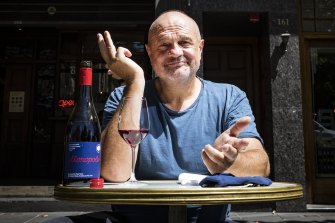 Con Christopoulos is happy the snap lockdown will end as scheduled.Credit:Chris Hopkins

But restaurateur Con Christopoulos, co-owner of the European Group, which counts Kirk’s Wine Bar and City Wine Shop among its venues, will be ready for diners.

“This is where customers are great. So if you go to a restaurant for lunch tomorrow, and they say to you oysters and the fish aren’t available [because stock is low], that’s not a problem is it?”

Mr Christopoulos had lacked the optimism to buy perishable items because he did not believe the “circuit-breaker” lockdown would last just five days.

“This lockdown was gut-wrenching,” he said. “I’ll be honest, it was the lowest I’ve been the whole year.”

Office workers had just started to get back into the city, he said, though his Spring Street businesses were still down by 50 per cent on a good day. Restaurants deeper into the CBD were still operating at only 20 per cent of normal, he said.

The Gippsland business had stocked up in preparation for Valentine’s Day on Sunday and was forced to sell takeaways, freeze food and ask suppliers if they would take stock back. 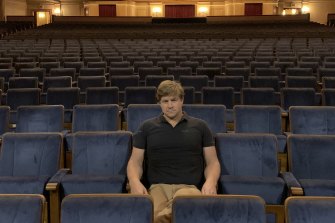 Jason Marriner, chief executive of the Marriner Group of heritage theatres including the Regent and Forum, said a brief lockdown was better for events than prolonged days with COVID-19 cases.

“We’re in a position with public events where confidence is born out of zero numbers, frankly, so every case erodes confidence … and that’s been sort of writ large in the ticket sales,” he said.

Paul Guerra, chief executive of the Victorian Chamber of Commerce and Industry, said struggling retailers in the CBD would continue to suffer while masks remain mandatory in the workplace.

“We haven’t seen people return to the CBD particularly in great numbers … While masks are required in offices, we don’t expect to see 50 per cent back.”

Melbourne lord mayor Sally Capp urged the federal government to extend its support for small business beyond the scheduled end date for the JobKeeper wages scheme on March 31, “whether it’s called JobKeeper, whether it’s in the same form of JobKeeper”.

”Every single conversation that we’re having with other levels of government is about calling for them to help with targeted financial support for local businesses,” she said.