Baker divides opinion with her two-ingredient recipe for Oreo SUSHI – so would you try it?

An ‘Instagram famous’ baker has divided opinion with her two-ingredient recipe for ‘Oreo sushi’.

Eloise Head, who built a large audience during the first Covid lockdown by posting videos of desserts on her viral food blog, FitWaffle Kitchen, recently showed fans how she makes the treats with a packet of biscuits and four tablespoons of milk.

Ms Head said she ‘cannot get over how good this is’, adding: ‘They look and taste amazing and are so easy to make! No baking involved.’

A video of the sushi has racked up a staggering 59,513 ‘likes’ since it was uploaded online on August 3, but some argued they would rather munch on a regular Oreo biscuit than go to the bother of mixing some with milk. 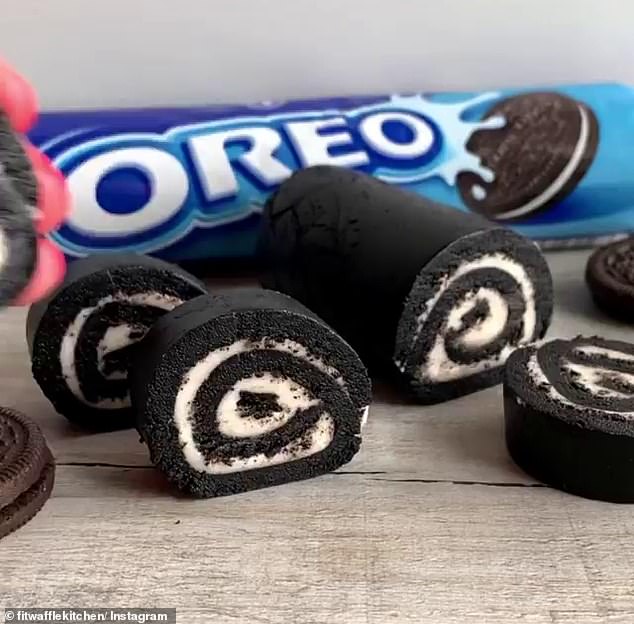 The sushi is unquestionably straightforward to make by simply separating 24 biscuits and scraping the cream filling out into a bowl.

Would you prefer ‘Oreo sushi’ or a good old-fashioned Oreo biscuit?

Would you prefer ‘Oreo sushi’ or a good old-fashioned Oreo biscuit?

The dry biscuits should then be blitzed in a food processor, then mixed with three tablespoons of full-fat milk and stirred until the mixture has formed a dough.

In a separate bowl, the cream filling should be mixed with another two teaspoons – or one tablespoon – of milk and stirred until creamy.

Once this is done, simply roll the biscuit dough out to a half centimetre thickness and cover it with cling wrap.

Spoon on the Oreo cream and smooth it out evenly, before rolling the dough over on itself smoothly and tightly.

Roll the cling wrap up at either end and refrigerate for one hour before eating cold.

The recipe drew many delighted responses.

‘More like a Swiss roll than sushi, but it looks amazing,’ one woman wrote.

‘I actually need these right now,’ said a second, while a third added: ‘These look so good.’

But others were less impressed with the experimental dish.

‘That is way way way way way too much hassle and faffing about when you could literally eat an Oreo and it would taste the same,’ one person said.