Bligh, the head of the industry’s lobby group, said if the initiative was legislated banks would assist in its rollout, adding they were deeply aware of the harm caused by problem gambling. 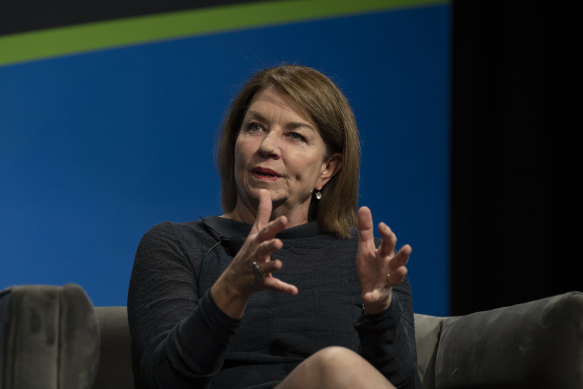 “Should the NSW government legislate for this initiative, banks will, of course, engage with the government at an appropriate time and assist with implementation where possible,” the Australian Banking Association boss said.

The future of the state’s gaming industry is firming as a key state election issue after NSW Labor vowed to cut the number of poker machines and launch a mandatory cashless gaming trial of 500 machines to counter the Perrottet government’s pledge to enact sweeping gambling reform.

With the state election less than 10 weeks away, the government is yet to present a scheme to cabinet as Premier Dominic Perrottet remains in discussion with senior colleagues and the National Party.

However, he has repeatedly committed to adopting the recommendations of the NSW Crime Commission, which has called for any cashless gaming card to be linked to an Australian bank account and personal identity.

Senior government sources have confirmed the government will not have access to any personal data through the implementation of cashless technology.

While the government is yet to reveal the detail of its long-promised proposal to turn the state’s 90,000-plus poker machines cashless, Labor leader Chris Minns on Monday released a comprehensive proposal to outlaw political donations from clubs with pokies, reduce cash feed-in limits and ban pokie advertising at venues.

Gambling reform advocates have welcomed some features of Labor’s policy, but say the proposal fails to go far enough and plays to the interests of pubs and clubs.

Minns on Tuesday called on Perrottet to reveal whether the government’s cashless gaming system would include a daily limit on the amount of money a person could gamble.

“I think it is also about time that Mr Perrottet and Mr Kean explain whether there will be a daily limit … because if there is no daily limit in place, then it could lead to an increase in problem gambling, not a reduction, that’s what the experts say.”

Minns said the one-year Labor trial would not include daily limits, but an expert panel tasked with running it would be able to recommend the measure as part of wider reform.

Despite Perrottet earlier this year saying a cashless system could not happen without spending limits, Treasurer Matt Kean on Monday refused to guarantee that it would form part of the government’s policy.

Asked whether a daily spending limit would be included in the Coalition’s gambling reform, Kean said: “The premier has said that he will be announcing his policy very shortly.”

Kean criticised Labor’s new gambling reform plan, pointing out that the number of pokies included in its mandatory cashless trial represented about half a per cent of the state’s poker machines.

Bligh, who insisted the issue was ultimately a decision for government, said banks had long been assisting Australians struggling to manage their gambling.

Measures offered to customers vary between banks and include customer-initiated blocks on gambling, time delays on the removal of blocks and real-time alerts for high-cost transactions.

NAB was the first major Australian bank to introduce self-blocking of gambling transactions with 48-hour delayed reactivation in March 2019. Around 43,000 customers used the function in the 12 months to October 2022.

ANZ also offers a gambling block tool for Visa credit and debit cards, blocking gambling transactions from being made in person, on the phone or online. More than 33,600 customers enabled the block in the same 12-month period.

More than 61,000 gambling blocks have been applied to Westpac customer debit and credit cards since it was first rolled out in 2021, while more than 80,000 Commonwealth Bank customers have activated gambling locks on their cards.