Two of the most powerful voices in country music have come together! Carrie Underwood and Dan + Shay teamed up for an epic ‘Dear Evan Hansen’ duet.

For the first time ever, Carrie Underwood and Dan + Shay have teamed up for a duet to be remembered. The country stars are featured on the Dear Evan Hansen soundtrack, singing the song “Only Us” from the Broadway play-turned movie. In addition to dropping the song on Sept. 3, Carrie and the guys also shared some behind-the-scenes footage of them recording the track in the studio.

Carrie sings the first verse, while Shay Mooney comes in for the second, with the rest of the song featuring some back and forth between the two. Meanwhile, Dan Smyers is behind the computer, working on all the technicalities and production aspects of the recording. The video also features clips from the movie, starring Kaitlyn Dever and Ben Platt. The pair’s version of “Only Us” from the movie was also released on Sept. 3. 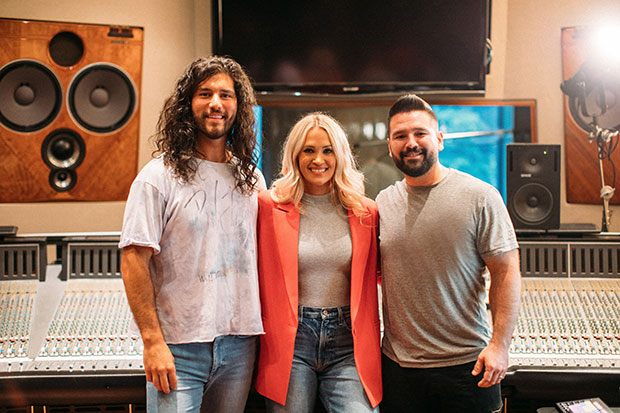 Dear Evan Hansen will be released in theaters on Sept. 24. The full soundtrack will also come out that day. The soundtrack also features songs from Sam Smith with Summer Walker, SZA, FINNEAS and Tori Kelly. Of course, there will also be the film-version of the songs, sung by the cast members like Amandla Stenberg and Colton Ryan. The movie version of Dear Evan Hansen also stars Julianne Moore, Amy Adams, Danny Pino and more.

After Dear Evan Hansen first debuted on Broadway in 2016, it immediately became a fan-favorite show. It won six Tony Awards and a Grammy Award. Ben Platt was the original star of the show, and will be reprising his role in the movie.

Meanwhile, Carrie and Dan + Shay are currently two of the biggest acts in country music. Dan + Shay released their fourth album, Good Things, in August, and will head out on their rescheduled arena tour later this month. As for Carrie — she released a Christmas album and gospel album in 2020 and 2021, but fans are anxiously waiting on some new music. In July, she performed some of her classic hits — “Church Bells” and “Last Name” — at the CMA Summer Jam, which aired on ABC earlier this week.