Good as new! Incredible before-and-after photos reveal just how much of a difference a good scrub makes – including a basketball court unearthed from a layer of muck

There’s nothing more satisfying than a great clean, as these incredible before and after photos show.

Fans of pressure cleaning from the US, the UK and the rest of Europe have shared the best before and after cleaning pictures they’ve come across in a Bored Panda gallery.

Sparkling images include a basketball court in Ohio was unrecognisable after it was thoroughly pressure washed.

In Maryland, one person showed that their outdoors steps looked so good after a pressure wash that it almost looked as if they had been repainted.

And even a sheep in looked satisfyingly spic and span after a good scrub.

Here, FEMAIL reveals the best cleaning jobs, from a grubby tractor to a sparkling sink. 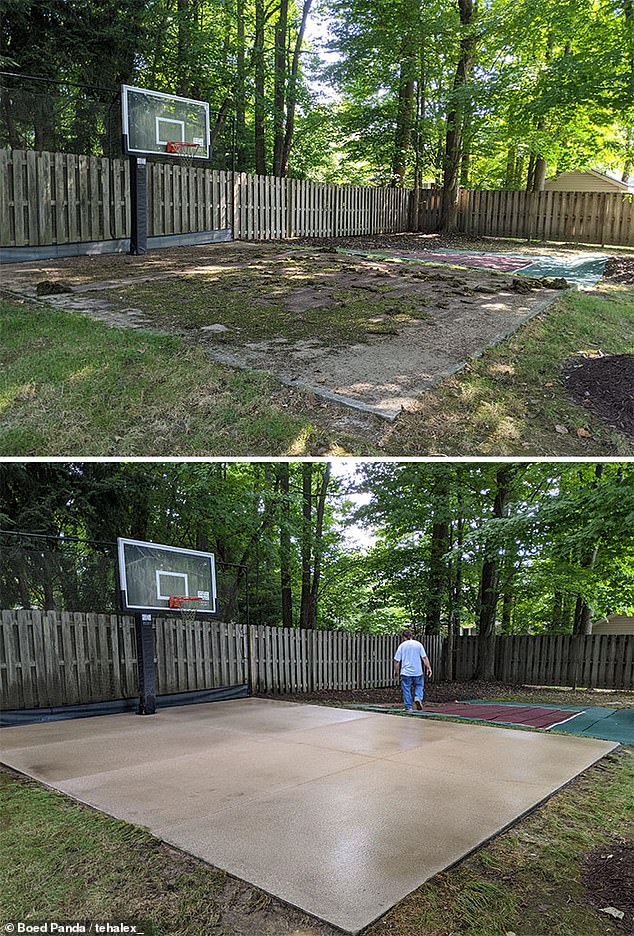 People have shared the best example of pressure cleaning they had come across. In Ohio, a basketball court looked unrecognisable after a thorough spraying 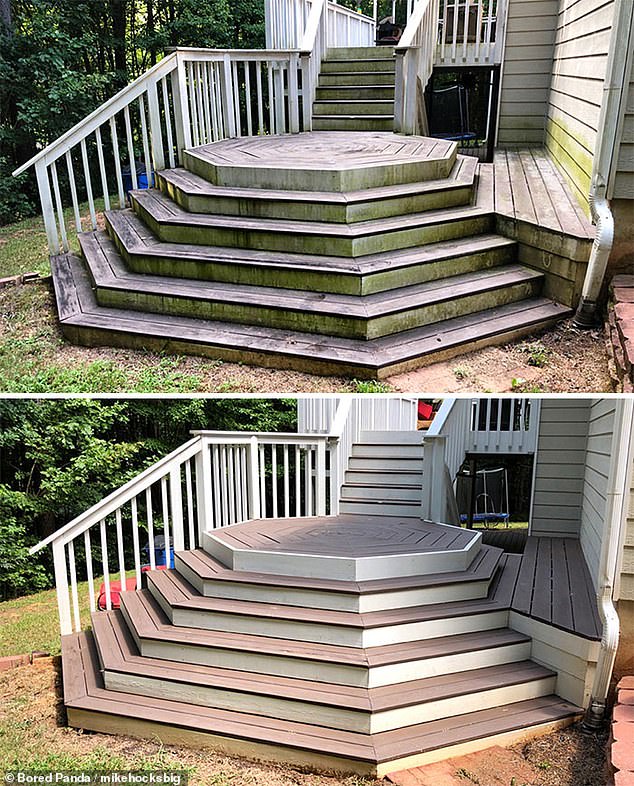 In Maryland, these outdoors stairs looked so good after a pressure clean that they appeared almost brand new 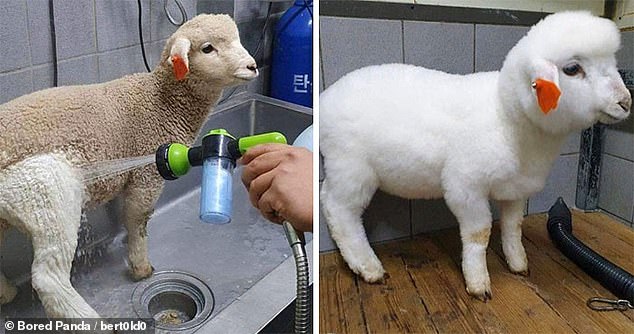 In Italy, this little sheep looked spic and span after a thorough shower that restored its luscious white wool 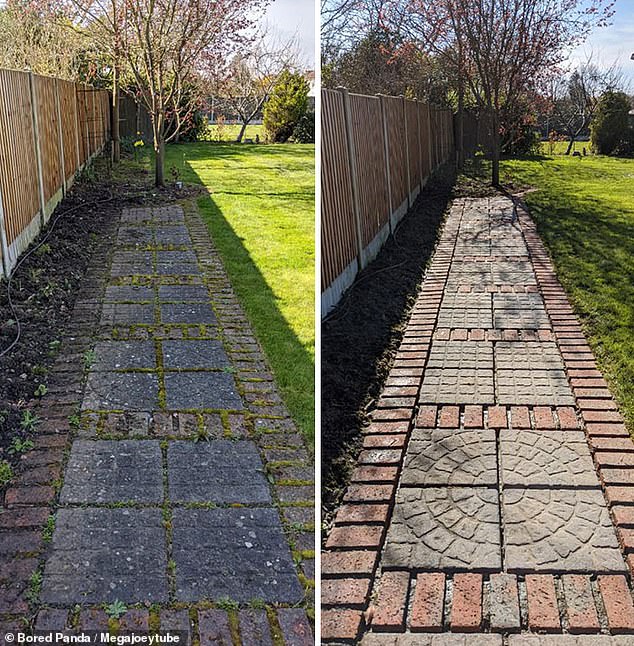 In the UK, a good pressure clean uncovered the spherical patterns indented in the cement, which had been hidden by muck 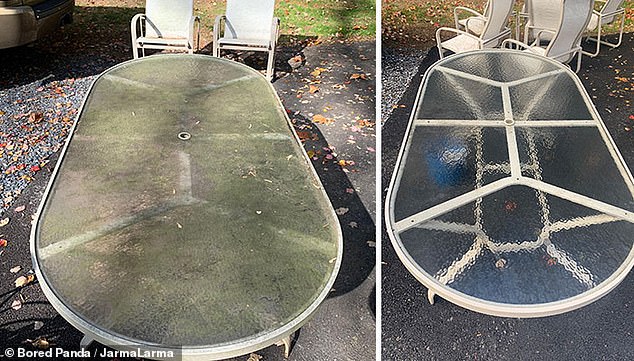 In Maryland, a glass garden table looked completely brand new after its owner got rid of the muck with a pressure cleaner 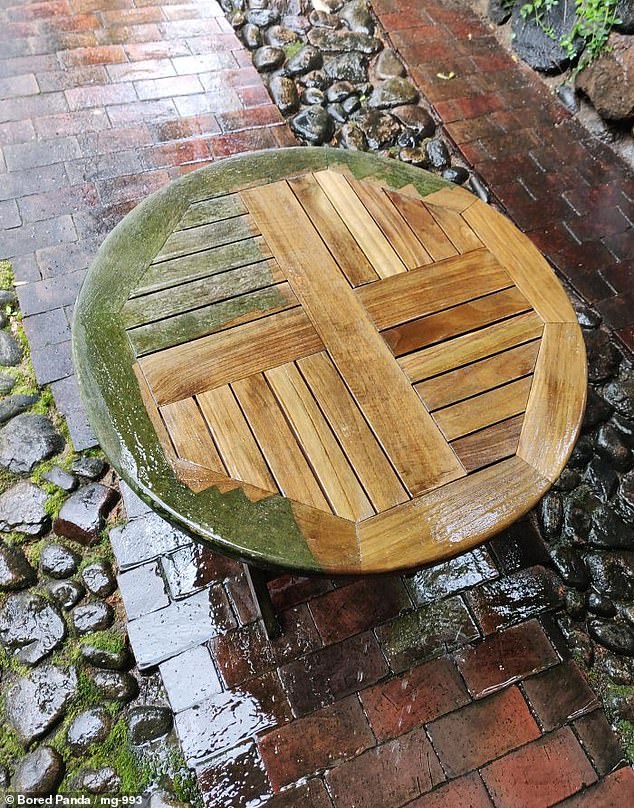 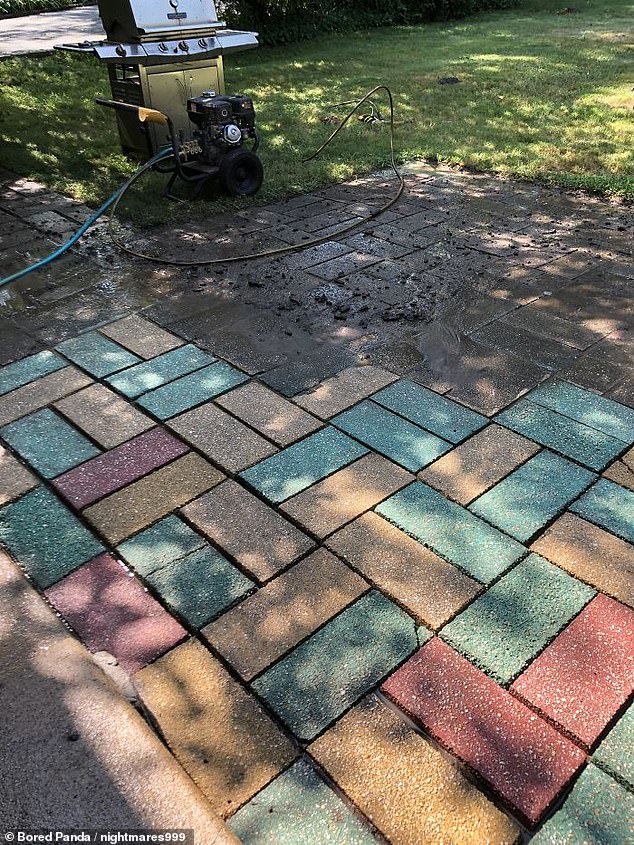 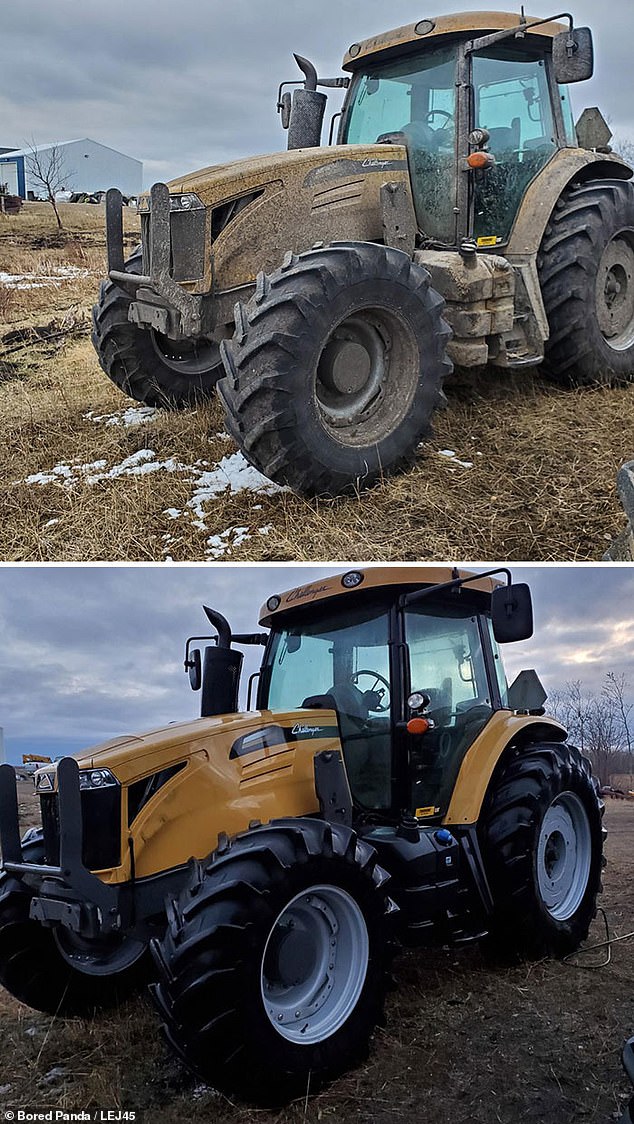 In the US, a tractor looked like it was its first time on the field after getting sprayed with a pressure washer 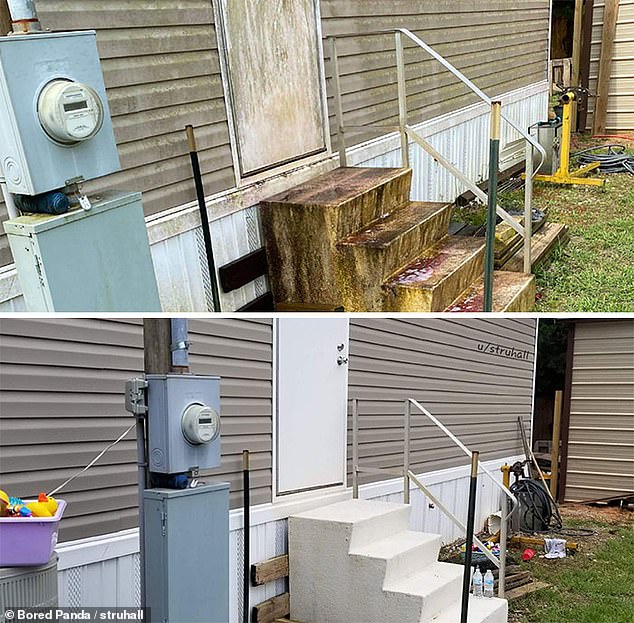 These white stairs in the US looked completely different after a thorough wash. Before (above) they were yellow in colour and mucky in appearance 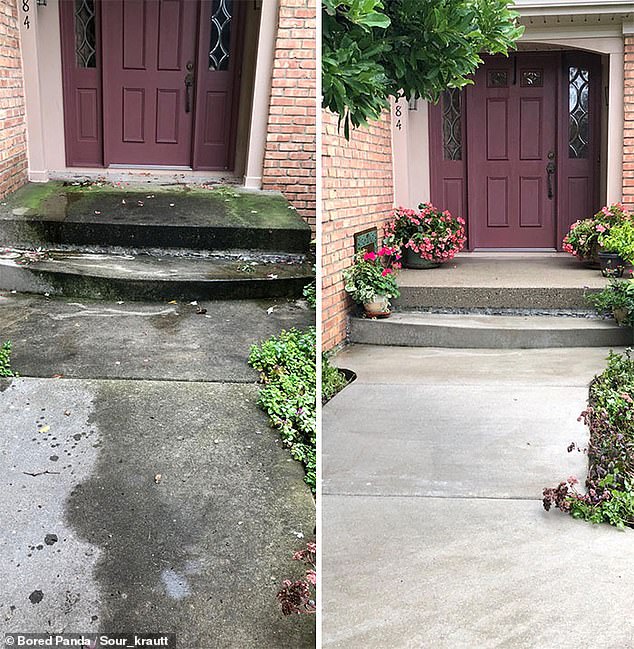 In Michigan, one person used their pressure washer to make their cement doorway look pristine In Nashville, one person compared their freshly-washed steps with those that were yet to be cleaned to emphasis how stark the contrast was 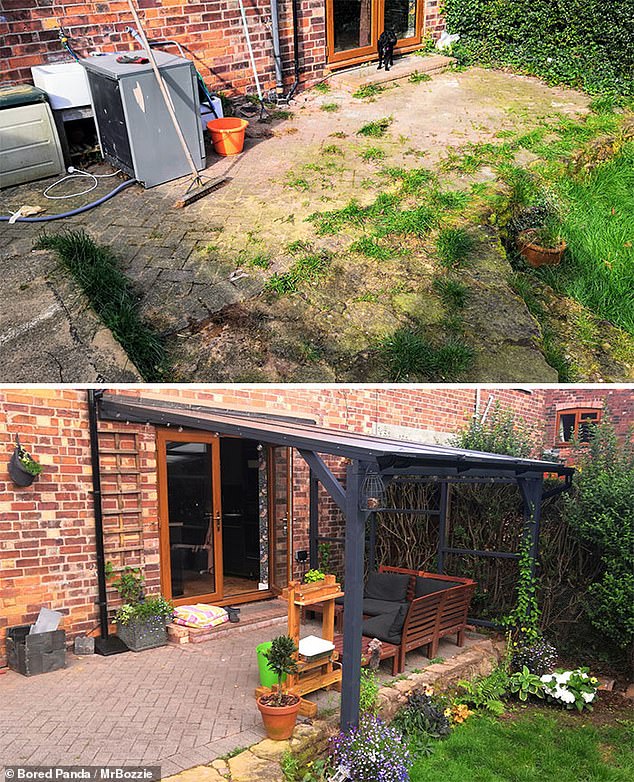 In the UK, this person’s patio looked like it belonged to another house after their pressure cleaned the tiles and added a canopy 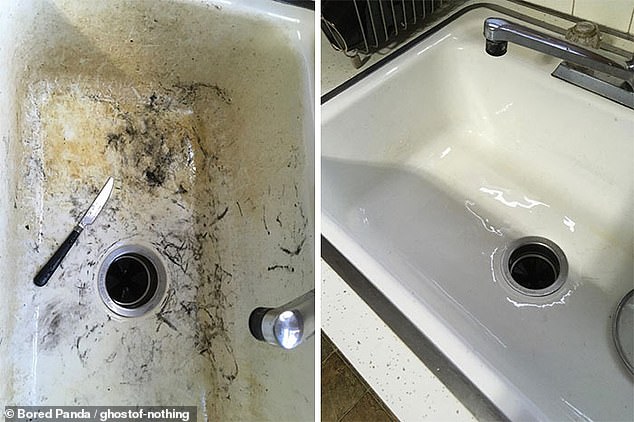 One person from an unknown location decided to clean their mucky sink using a pressure cleaner for better results. The sink looked completely new 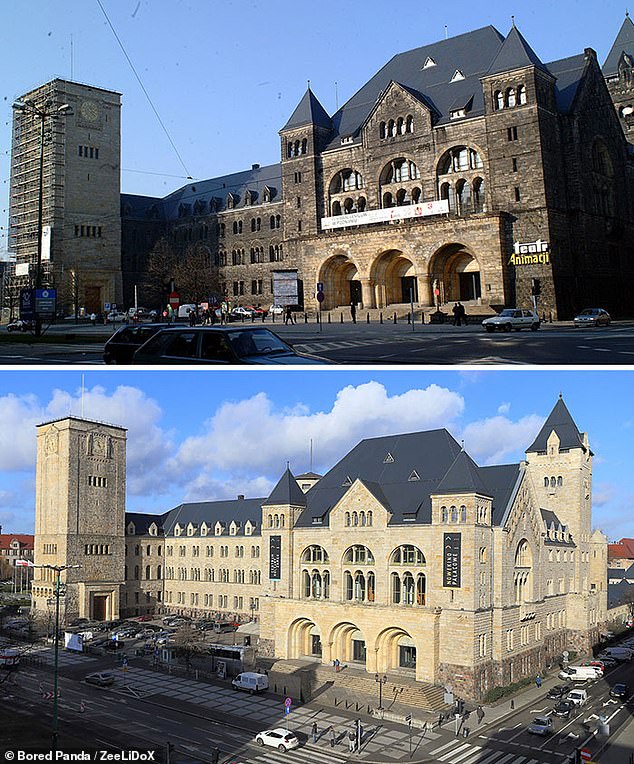 One person shared before and after pictures of the Imperial Castle in Poznań, Poland to document its refurbishment process 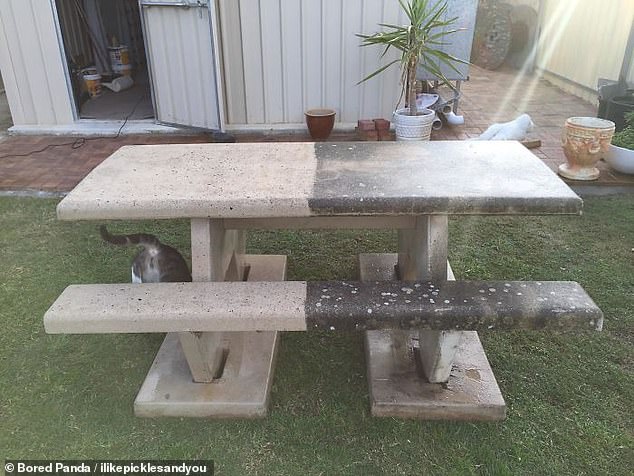 In the US, one person decided to clean a bench they found in the street. This picture highlight how different it looked after some TLC