A couple who met while they were stranded on board a cruise ship when the Covid-19 pandemic struck reveal how they are now expecting their first child together less than a year later.

Bethany Suthers, 28, from Sowerby Bridge, West Yorkshire, met bar worker Max Vakulich, 29, from Belarus, while working as a performer on board the Marella Discovery 2 in March last year.

Just two weeks into Bethany’s seven month contract, passengers were made to disembark in Montego Bay, Jamaica, and fly straight home as the risk of Covid-19 spreading on board became clear.

The crew remained on board because the situation was expected to blow over ‘in a couple of weeks’. When it emerged this was not the case, the ship sailed to Cuba in the hope of letting the crew disembark but was turned away and spent months ‘floating aimlessly’ around the Caribbean before docking in Southampton in April.

Over those two months stranded on board the ship Bethany and Max fell in love and shortly after they disembarked, she booked a flight to Belarus to be with him. While she was there, she discovered she was pregnant.

In August, Max moved to the UK to be with Bethany and proposed in September. The couple’s first child is due this month. 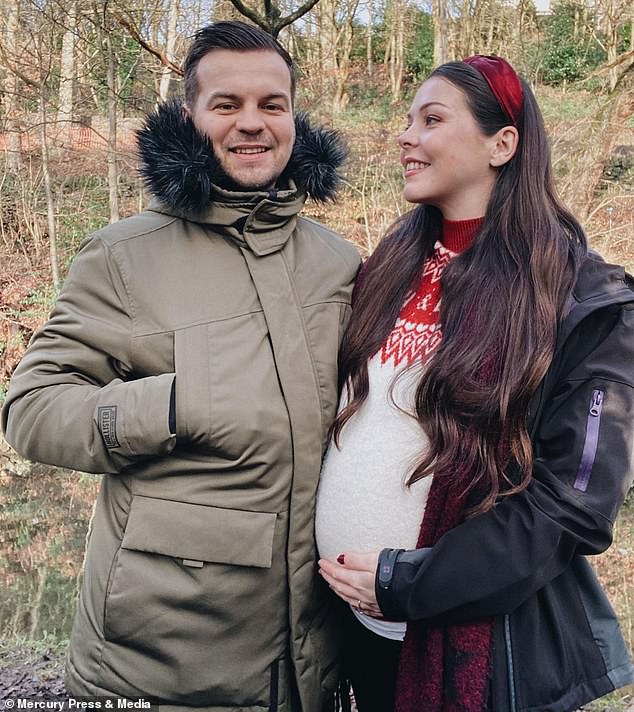 Bethany Suthers, 28, from Sowerby Bridge, West Yorkshire, met Max Vakulich, 29, on the ship they were both working on at the height of the first lockdown back in March 2020 and now Bethany is days away from expecting their first child 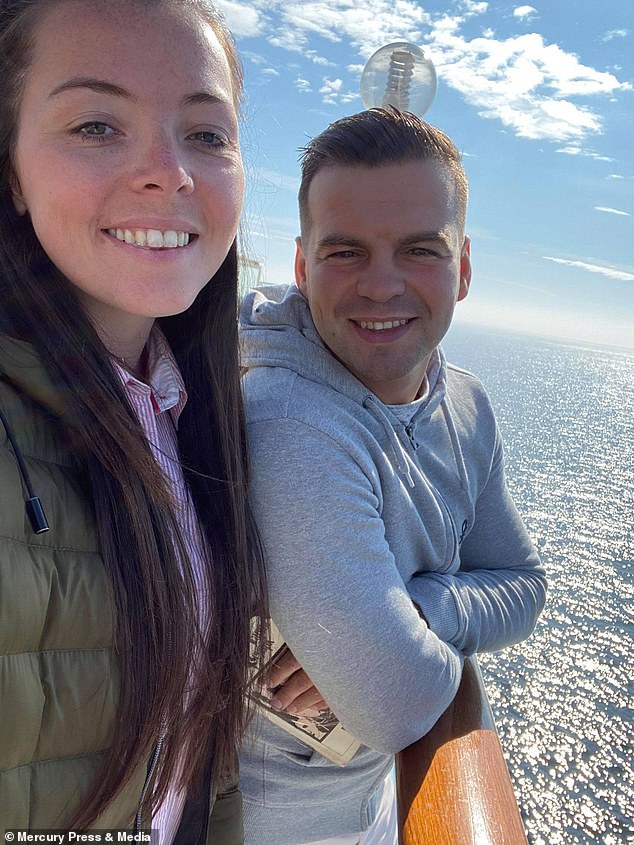 The pair admit it was love at first sight and spent the next two months on board the ship, which wasn’t allowed to dock, getting to know each other (pictured on the cruise ship deck) 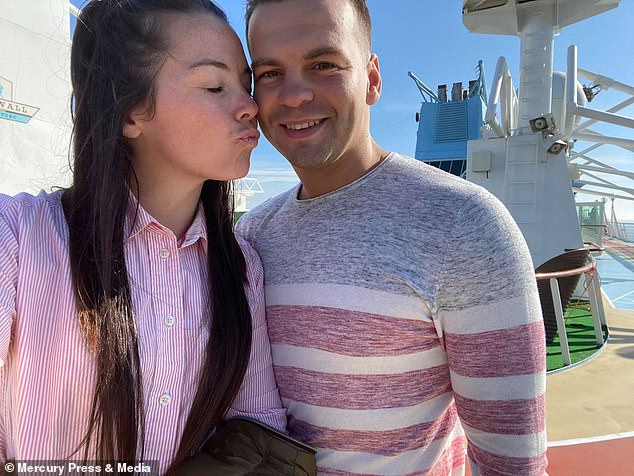 Bethany and Max had only been on board for two weeks when passengers were forced to disembark, leaving just the crew behind (pictured together on board)

‘I had a seven month cruise contract and now I’m getting married and expecting a baby so I have a totally different life now.

‘If it wasn’t for Covid, this might never have happened for me. I’ve asked Max before if he would have approached me if the passengers had been on board but he just doesn’t know.

‘If it wasn’t for us being stranded we wouldn’t have been able to spend all that time getting to know each other.’

Max said it was ‘love at first sight’ when he saw Bethany and finally worked up the courage to speak to hear.

He said: ‘Bethany stood around the table with her friends and drinking Prosecco when I first saw her. 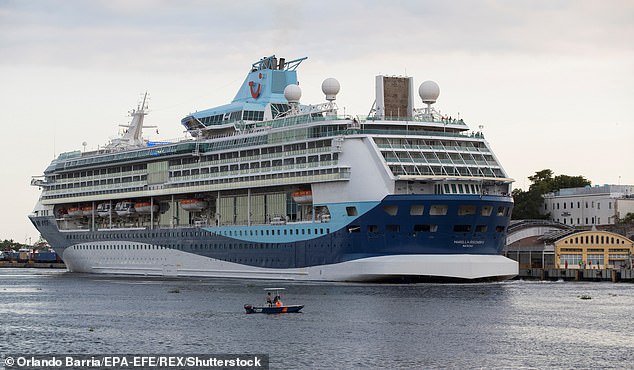 The crew were told to stay behind because company bosses only expected the situation to blow over ‘in a couple of weeks’. However it soon became clear it would take months to pass and the ship (pictured) floated around in the Caribbean Sea 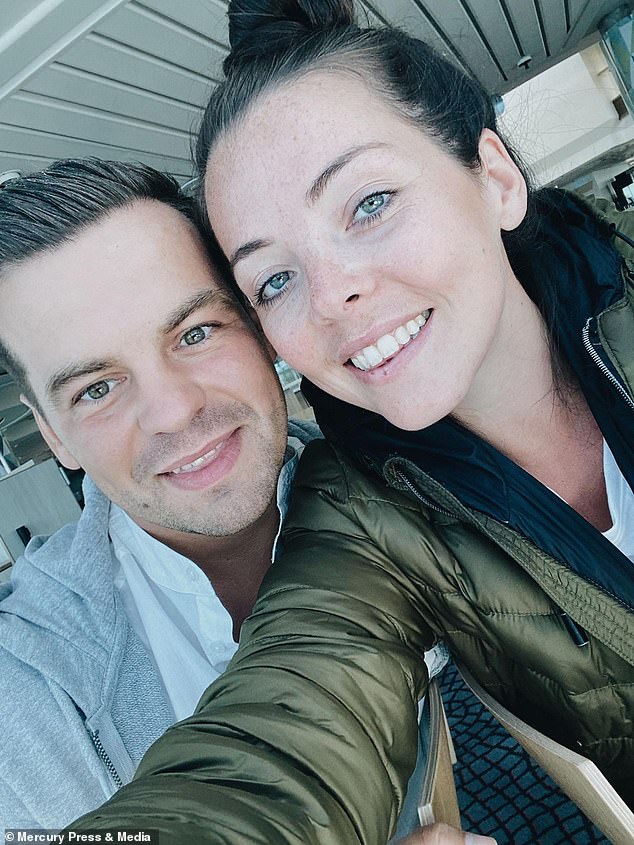 On the cruise ship, Bethany said the pair spent ‘almost all of our time together, watching films, playing puzzles, talking and doing jigsaws’ (pictured on the ship) 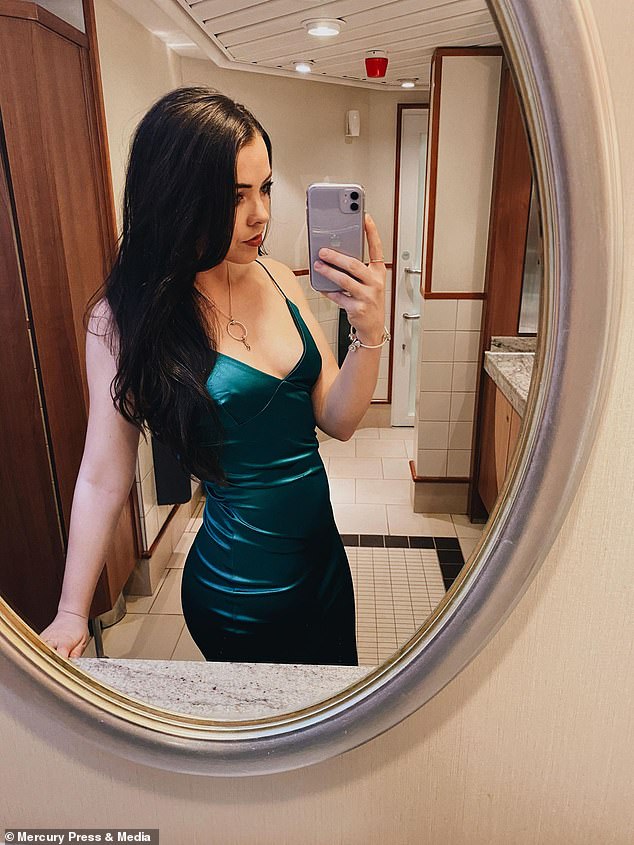 Max first saw Bethany when she was drinking prosecco with her friends. He said: ‘She had a green silk dress, high-heeled shoes, perfect long dark hair and a smile with snow-white teeth’ 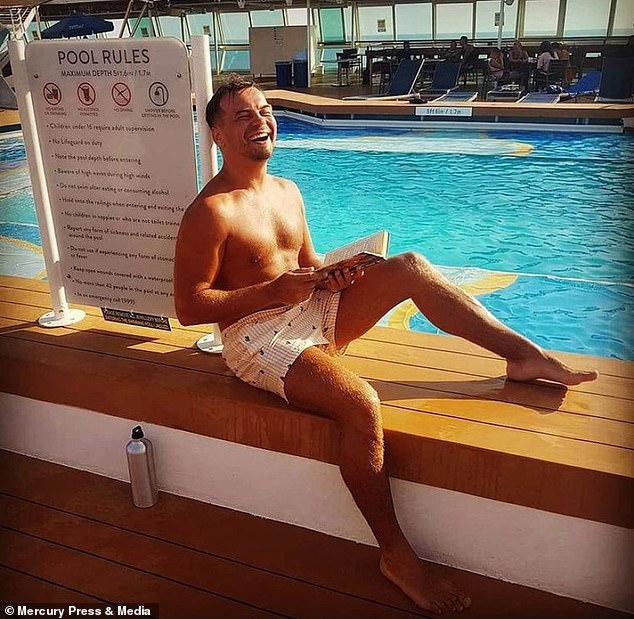 Bethany said: ‘I’ve asked Max before if he would have approached me if the passengers had been on board but he just doesn’t know’ (Max is pictured by the pool on the cruise ship)

‘She had a green silk dress, high-heeled shoes, perfect long dark hair and a smile with snow-white teeth.

‘She was laughing and behaved so lightly and gracefully, it was love at first sight. I’d never wanted a serious relationship until I saw her.’

Bethany added: ‘We were in lockdown on the ship and just floating aimlessly in the Caribbean sea with an announcement every now and then because the captain didn’t even know what was going on.

‘We spent almost all of our time together, watching films, playing puzzles, talking and doing jigsaws.’ 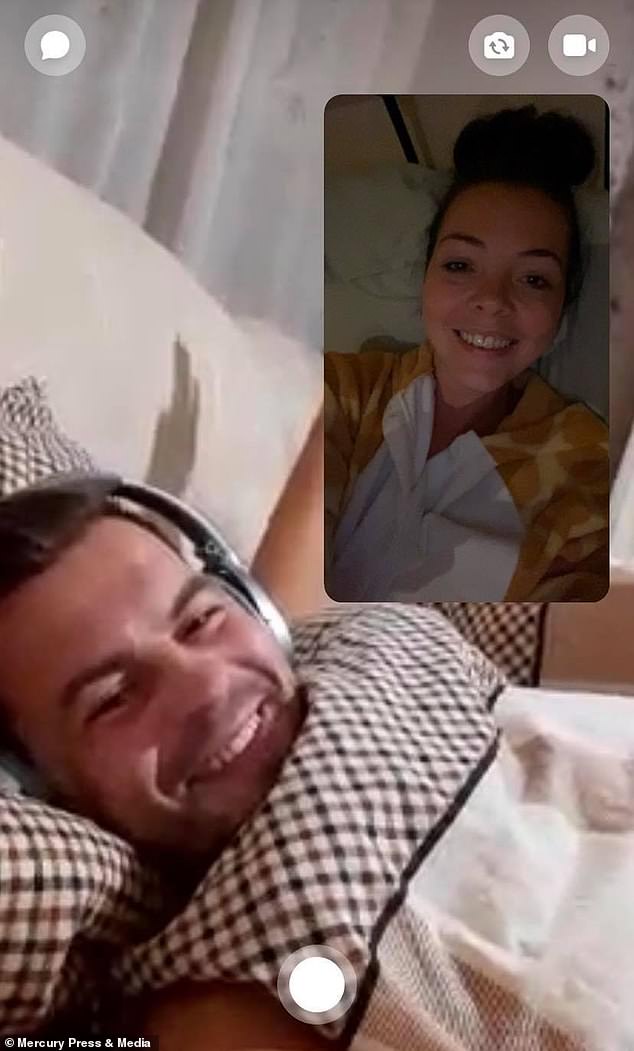 After the ship docked, Bethany and Max Facetimed each other a lot, but in May she decided to fly out to Belarus to see Max 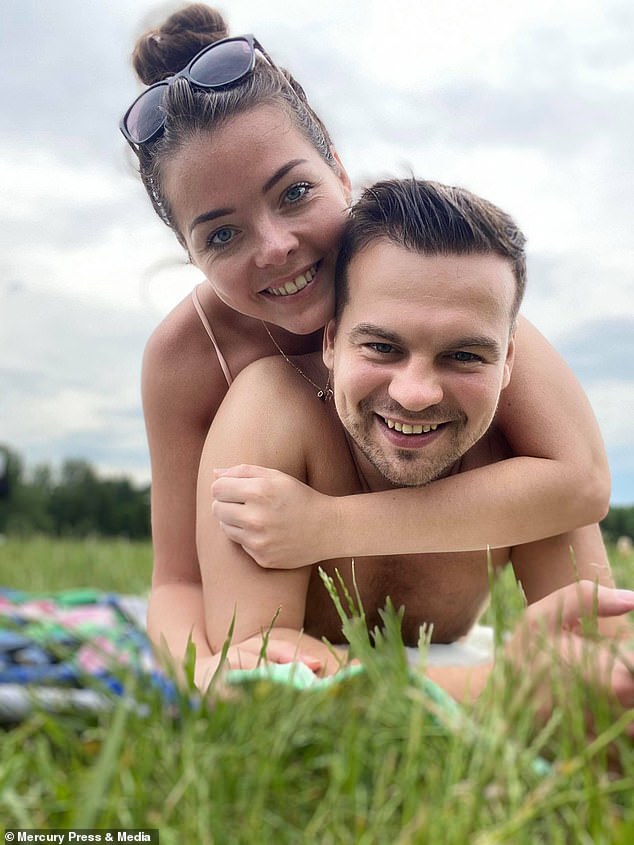 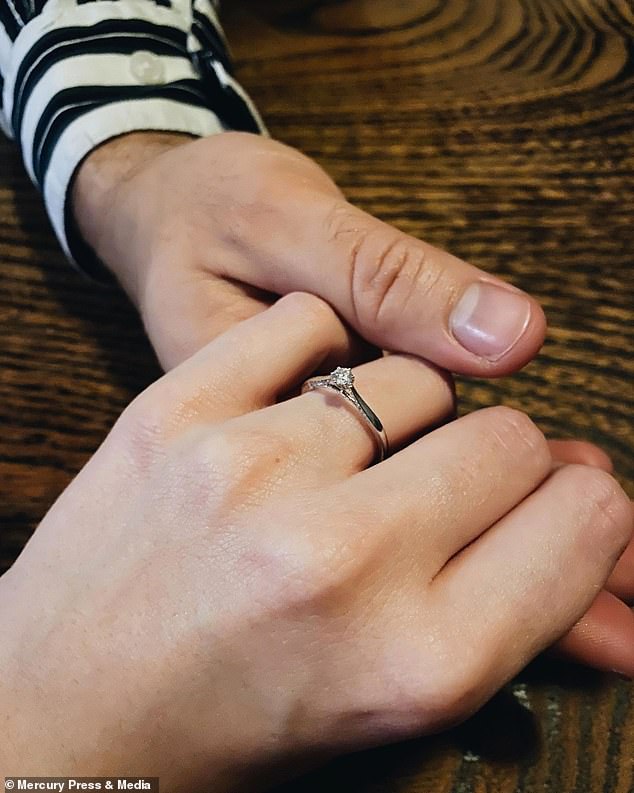 The pair quickly started the process to get bar worker Max a visa and he flew over to the UK in August, proposing to Bethany one month later

When the ship finally docked in Southampton at the end of April, Bethany realised they faced a long-distance relationship.

‘We didn’t know if we’d ever be able to see each other again but we knew we wanted to,’ she said. ‘We just FaceTimed a lot then in May I decided to fly out to Belarus to see him.

‘Two of my flights got cancelled but the third flight went ahead and I spent four weeks there then just before I flew back we found out that I was expecting and we were both really happy.

‘We both wanted a life together, as cheesy as it sounds, we just knew.’

The couple started the process of securing Max a UK visa and he arrived in August. He proposed a month later.

Bethany’s baby is due in February 2021 and the couple hope to marry in the summer. 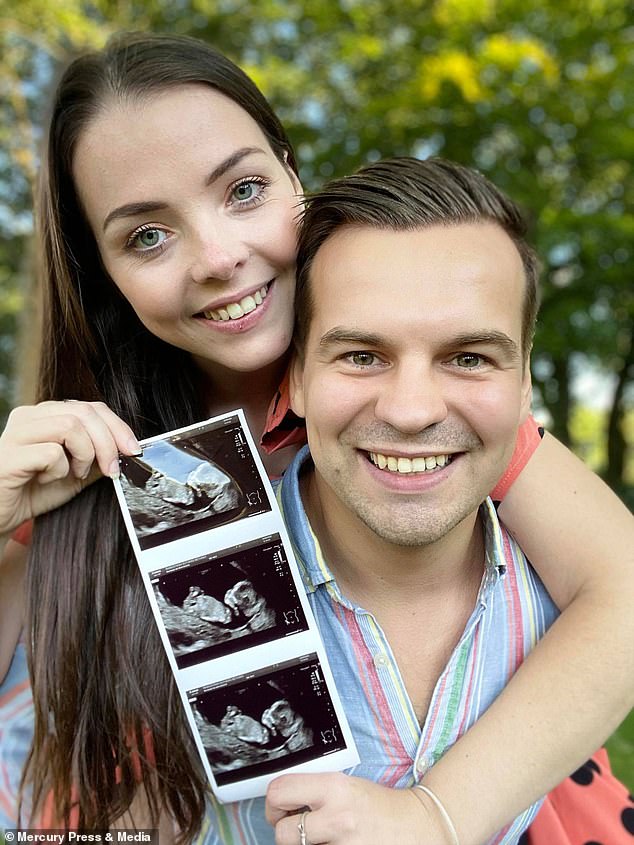 After realising they’d be separated when the ship finally docked, Bethany booked the first flight to Max’s home in Belarus where the couple were delighted to discover that they were expecting a baby girl (pictured) 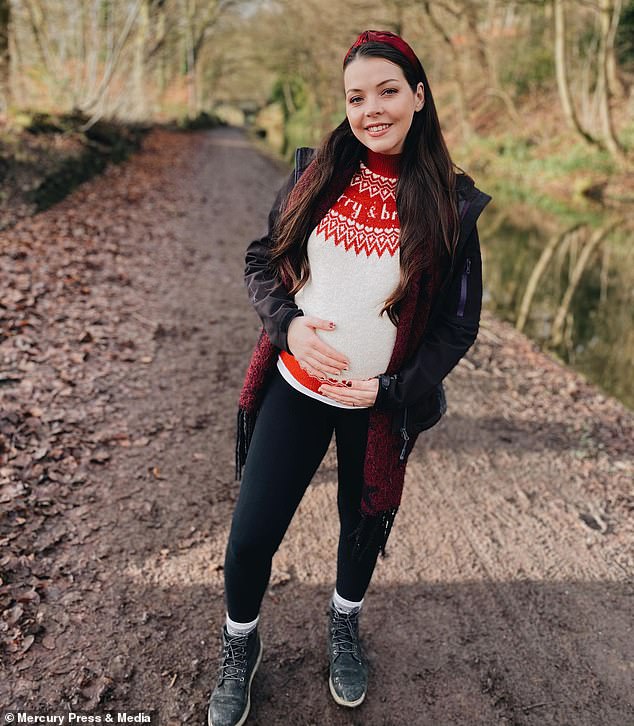