In the early days of the coronavirus pandemic, New York Governor Andrew Cuomo’s administration issued a memo instructing hospitals and group homes to “expedite” the release of asymptomatic group home residents back to their communal living sites. The order may have had terrible consequences. State data obtained by CBS News shows the virus ravaged group homes in the state, infecting more than 20%, or one in five, of their residents.

More than 34,500 people with intellectual and developmental disabilities live in group homes in New York, and there have been 552 COVID-19 deaths reported as of March 7, with 6,934 residents testing positive since 2020, according to the data provided by the state’s Office for People with Developmental Disabilities, the agency that oversees support services and group homes.

Over the past few weeks, Cuomo has been under fire over the state’s misleading reporting of nursing home residents’ COVID-19 deaths, which left thousands of cases out of the nursing home tally if the person died at a hospital instead. The governor now admits it was a “mistake.” The controversy drew renewed attention to a highly criticized policy from the first wave of the pandemic — allowing the release of recovering coronavirus patients from hospitals into nursing homes even if they might still be contagious. The March 25, 2020 memo authorizing the nursing home policy was rescinded May 10.

What’s gotten less attention is that the now-embattled administration also issued a similar directive on April 10, 2020 affecting group home residents. The state’s Office for People With Developmental Disabilities (OPWDD) told the operators of residential facilities to be ready to “expedite the return of asymptomatic [group home] residents from the hospital.” The directive noted that there must be clinical staff available to meet their medical needs and that “[s]tandard infection control precautions must be maintained.”

“Consistent with public health recommendations, OPWDD issued guidance instructing providers to accept individuals only if they could safely accommodate them in the group home,” Jennifer O’Sullivan, the office’s director of communications, told CBS News in an email. “People who could not be safely accommodated either remained at the hospital or were served in one of the over 100 temporary sites established for COVID-19 recovery efforts.”

The OPWDD’s April 10 order still remains in effect, according to the agency. Cuomo’s office did not respond to a request to comment on the policy.

Members of the state legislature’s committees on disabilities and mental health are demanding answers.

“I am deeply concerned that the April 10th order from OPWDD needlessly put some of our most vulnerable citizens in harm’s way,” Republican state Senator Michael Martucci, ranking member of the Senate Disabilities Committee, said in a press release. “Close on the heels of the deadly nursing home order from the Department of Health, this order appears both dangerous and tone deaf.”

Early data shows those with intellectual or developmental disabilities living in group homes may be more likely to die from COVID-19.

“When the nursing home deaths started becoming apparent during COVID, I got this sick feeling that, ‘Oh my God, what if James were in a group home?’ We might have lost him,” Maria McFadden Maffucci told CBS News in a Zoom interview. “So I felt like we dodged something.” 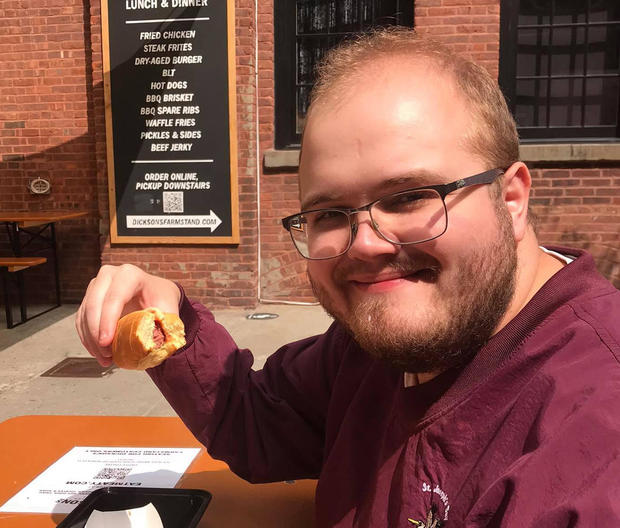 For Maffucci, who lives in New York and works as the editor in chief of The Human Life Review, this revelation hit particularly close to home. Her son, James, is on the autism spectrum. Before the pandemic hit, Maffucci had just started looking into a group home for James, who also suffers from autistic catatonia, a form of regression seen in people with autism.

“He really regressed to the point where he would get stuck in the same place for hours and have other strange OCD or freezing activities, having difficulty initiating activities,” she explained.

She said this condition began to worsen about three years ago.

“He really couldn’t get up out of bed. And then we started treating him with different medicines,” she said. “So to be honest … it’s been a very hard journey.”

While James still has an aide coming three days a week to do activities — with masks on — Maffucci said he has regressed even more during the pandemic without the programs he used to go to.

“Even when he wasn’t doing that well, he was able to go out — like, he had dances and bowling with his South East Consortium,” Maffucci recalls. “And when the pandemic hit, everything, of course, stopped.”

Maffucci says James is eligible for the COVID-19 vaccine, but she also recognizes the struggles for other families to get a shot for their loved ones.

“You can tell the good of a government or a society about how they treat the most vulnerable members, and we’re not doing so well right now,” she said, her voice trembling and taking a breath. “It’s a human rights issue, obviously.”

Sixteen-year-old Jessie Strieter is one of those vulnerable members. She has Down syndrome as well as other underlying health conditions.

“Shortly after birth, at three months of age, she had a heart repair,” her mother Lisa Strieter explained on a Zoom call. “Within the last two years, Jessie had strokes and we didn’t know where they originated from. And honestly, we still don’t know.”

Guarding Jessie against the novel coronavirus is the family’s ultimate priority. Since Jessie is considered high-risk, they only go out for grocery shopping, doctor’s appointments or work. 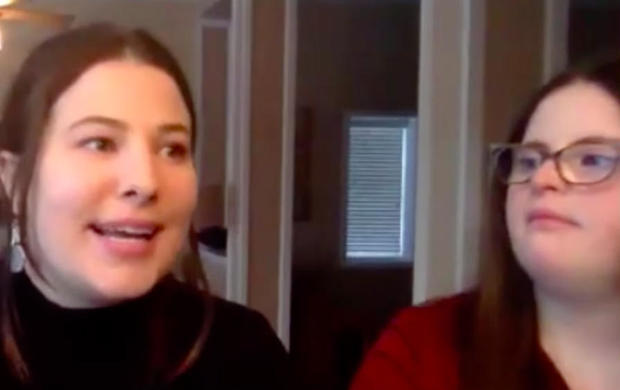 She and her sister, Halle, are not attending classes in person — opting to go fully remote. Halle, a Siena College student, acts as a caretaker while their parents are at work, making sure Jessie logs in for her high school classes and cooking meals for the family. In between, she must find time for her own schoolwork.

“It’s not easy going from a very social lifestyle to being quarantined for almost a year now,” the 21-year-old admits in an email. “But if it’s to keep my sister safe, then I would continue to do it in every lifetime.”

Lisa Strieter, who works as a teacher in Rockland County, a suburb of New York City, was able to get the COVID-19 vaccine in February. But at first, the mother of three wasn’t able to get any information as to when her high-risk daughter would be allowed to receive it.

“I was lucky enough to get both of my vaccines. So I’m in a good position,” she said. “Now we’re just hoping Jessie can come next.”

New York did eventually expand its eligibility criteria to include people with developmental disabilities ages 16 and up, following neighboring New Jersey. Jessie is scheduled to get her shot this month.

But the dangers faced by those with developmental disabilities are often overlooked, leaving others like Jessie even more vulnerable.

The case for more data

According to the CDC, 6.5 million Americans have an intellectual or developmental disability, or IDD, and an estimated 2.6 to 4 million reside in group homes. A recent study, published in the Disability and Health Journal, found that those with IDD living in group homes may be more likely to die from COVID-19.

Other research has found that people with IDD have a higher prevalence of comorbidities — including hypertension and heart disease, identified as risk factors for COVID-19.

Scott Landes, co-author of the study and an associate professor of sociology at Syracuse University, said the pandemic has exposed shortcomings in the medical community “as we’ve made decisions on who we collect data on, what we report, who we emphasize, who gets prioritization.”

“I think on a philosophical, underlying level, it’s because we have failed to value this group,” he said  — something he and his colleagues “are really focused on trying to change.”

Their first study utilized a database of health records, which showed that the ages of people with IDD who died from COVID-19 skewed younger than average. The state that had the most comprehensive data set was California, which included COVID-19 outcomes for people with intellectual and developmental disabilities along with information about their type of living situation.

“We found that the amount of cases indicating the spread of the virus were more severe in settings that had more residents,” he told CBS News on Zoom. “We know this from what we know about nursing homes.”

But the studies repeatedly noted a more systemic problem: a lack of medical data available on those with IDD, many of which are associated with severe outcomes.

“There has not been a consistent or systematic reporting of COVID-19 outcomes for people with intellectual and developmental disability,” Landes said. “We know of some states that have data that are not reporting it publicly.”

In New York, health officials give residential facilities and other health care providers a weekly verbal briefing on COVID-19 data, but it’s not shared with the public, according to Landes.

“So that’s why, for our second study, we relied on data from New York Disability Advocates, which is a conglomeration of providers across the state who have gathered and reported their own data.”

Dr. Margaret Turk of SUNY Upstate Medical University, who co-authored the studies, noted that it is not just an issue for people with intellectual disabilities. Historically, there hasn’t been consistent reporting for people with other types of disabilities. She stressed the need for a better reporting system as well as more inclusive education for those in the medical field and others.

“People don’t think ‘disability’ when they think ‘diversity,'” she explains. “Our entire health professions education probably needs someone or some group to look over that, just as there are for the other diversity-related issues that seem to have been uncovered by the pandemic.”