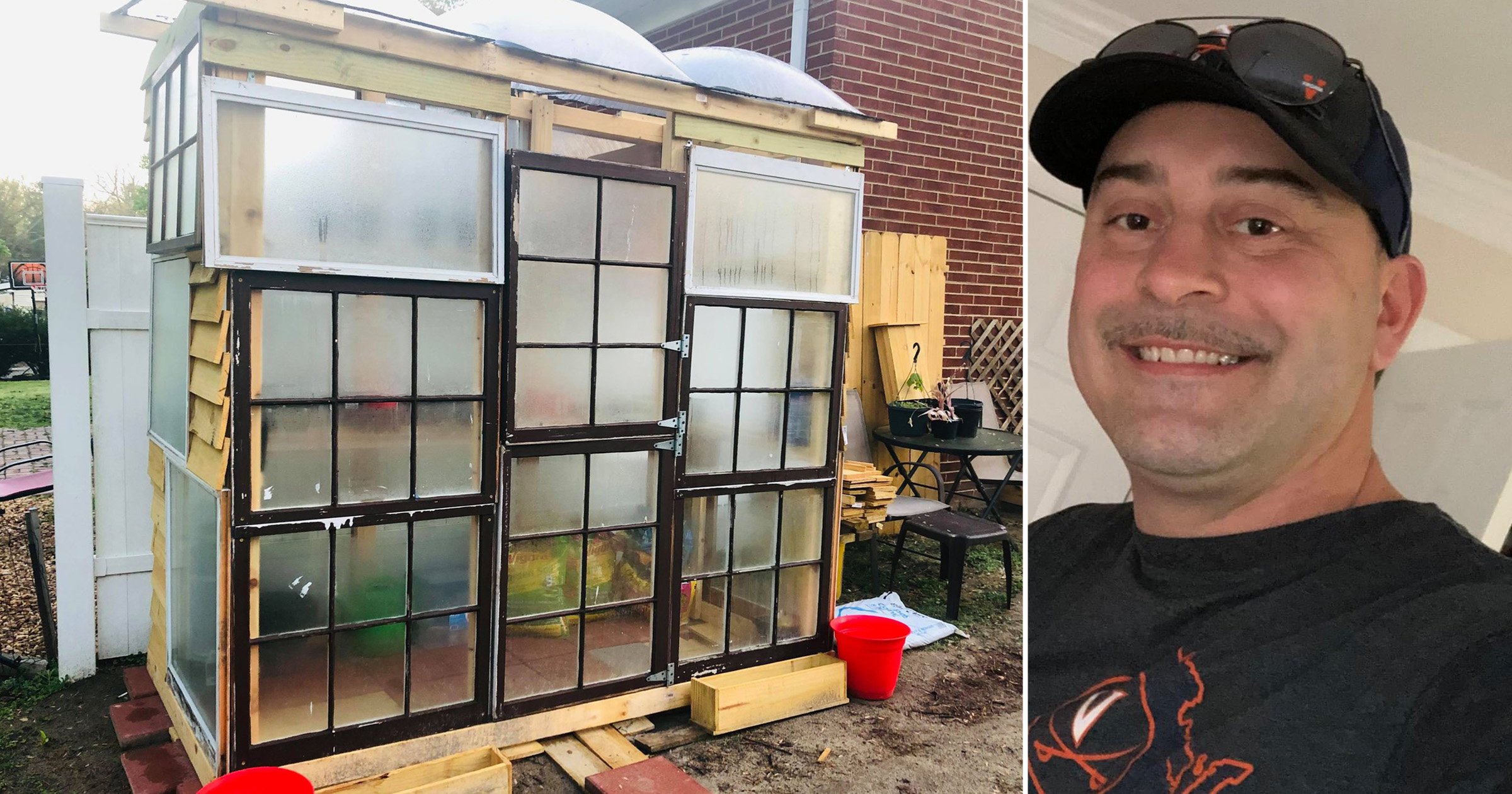 A greenhouse can be a handy addition to a garden – but they often cost hundreds of pounds.

One dad has impressed people on social media by building his own out of old windows, for a total cost of just £70.

The orthopaedic surgical assistant had always wanted his very own greenhouse to grow fruit and veg and so in April, decided to build one by himself – made from recycled materials.

‘Growing up, my dad and mom always had a garden, It was a way of life,’ Kendall said.

‘We never had a greenhouse but I always wondered how it may have helped us grow different things. I always wanted one.

‘So I decided to build the greenhouse because I had the opportunity to do it affordably with the materials I had on hand.

‘I have always had a traditional garden but I wanted something more aesthetically pleasing, something resembling a Japanese garden, which I have always been fond of.’

He had some time off work earlier this month and decided it would be a good time to tackle the project, with his children helping.

Spotting that his brother was planning to throw away a truck-load of windows, he decided he could make use of them.

The dad said: ‘It all started a few weeks ago when I stopped by my brother’s house on the way home from work.

‘He had just completed a construction job replacing the old wooden windows with new vinyl/thermal windows and had a truck full of old windows in good condition so I asked what his plans were.

‘He was going to the dump with them.

‘Then the idea hit me and I told him I wanted them and we brought them to my house.

‘He also had some leftover pieces of fence panel from a fence job so I took those too.’

He then discovered his neighbour also had some used 2x4s pieces of wood that he was going to burn, so Kendall asked if he could have those too.

And the final piece came together when he found old skylights from a skylight replacement job he had done years ago.

The dad said: ‘Up until I built the greenhouse, I just used the domes on top of tables I built out of pallets as small greenhouses.

‘I then placed the windows in various configurations to try to find the best use of space and also look uniform.

‘I ended up finding what I consider the perfect use of space and functionality.

‘I have several vents incorporated into the build, as well as two windows in the front that open and allow for airflow.

‘As well as the door opening in two halves – from upper to lower – this was definitely the hardest part, using 23 windows of all different sizes and shapes to come to a conclusion that was as close to symmetrical as possible.

‘On the sides, I staggered the windows and the wooden planks to resemble an artistic Mondrian look.’

The whole thing took two days, though he notes that his extensive background in construction definitely helped speed things up.

The only costs were for hinges, some wood and pavers.

After sharing the project on Facebook, it’s had over 1,300 likes and hundreds of comments from people.

One person wrote: ‘Looks quite artsy, I love it.’

A second Facebook user said: ‘Looks like an English telephone booth and a greenhouse fell in love and made a baby.’

And another person revealed they are planning to make their very own greenhouse with recycled windows too, adding: ‘Awesome! I’m trying to save windows to build me a small one.’

Kendall loves the final result and although he still wants to paint it and finish the flor in the coming weeks, it’s already being put to use.

The dad said: ‘Currently I am seeding tomatoes, peppers, eggplant, and squash and most of them have sprouted already.

‘I mainly will use it as a way to get an early start on seeding.

‘It will also provide me with a place to store plants that can’t survive staying out all winter in my climate.’

And to anyone else who is considering embarking on their own DIY greenhouse project, Kendall advises them to keep an eye out for materials that can be repurposed.

He added: ‘I am a big advocate for reuse, recycle, repurpose.

‘I think we should all try to leave as small of a footprint as possible on the Earth and every little effort matters.

‘If we all do our best they can add up to great things.

‘We can improve our environment while simultaneously improving our own way of life.’

Get in touch at [email protected]