Health Minister Jenny Mikakos has acknowledged mistakes were made while Victorian authorities tried to bring coronavirus cases under control, saying she was "deeply sorry" if her efforts had not been enough.

In an extraordinary late-night tweet, Ms Mikakos urged people to let an independent inquiry investigate failings in government-run hotel quarantine that led to community outbreaks, saying she would "let the cards fall where they may". 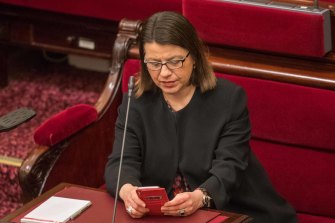 The admission followed a tumultuous week for the minister, in which she was branded "arrogant" by the opposition after refusing to answer questions put to her in Parliament.

Problems with the hotel quarantine operation are believed to have been responsible for the initial outbreak that led to the second surge in coronavirus cases.

Federal Treasurer Josh Frydenberg on Saturday escalated his attacks against the Andrews government's quarantine system, saying Victorians were entitled to more information about what went wrong.

Ms Mikakos began her Twitter essay at 11.54pm on Saturday, outlining that she had grown up being inspired by Greece's "most enduring contribution to civilisation – democracy".

"A bust of the great Athenian statesman, Pericles, who built the Parthenon and governed during its golden age of educational and cultural achievements, sits proudly in my office," she said.

"Sadly, this great man succumbed to the plague of Athens in 430BC, with his society increasingly failing to abide by the laws at that time as the plague spread.

"In 2020, it's easy to forget that pandemics have shaped world history for millennia."

Ms Mikakos said the last pandemic, the Spanish flu, was 100 years ago and no one had any experience in responding to a health crisis of the magnitude the world is now facing.

She urged people to let former Family Court judge Jennifer Coate independently conduct the hotel quarantine inquiry and "let the cards fall where they may", as the "truth will set you free".

"Since the first case in January, a huge effort by thousands of healthcare workers and many others has seen a huge amount of good work achieved in preparing our health system," she posted.

"It was work that needed to be done quickly and nimbly because the virus would not wait and no doubt mistakes were made along the way because humans are flawed, yet contagious viruses are unforgiving.

"Since that fateful day on 25 January, when we had our first ever case, I've worked every day to keep everyone safe. I have put every ounce of energy I've had into that effort. If it wasn't enough, then I'm deeply sorry."

Ms Mikakos' refusal to answer questions in Parliament on Tuesday – instead opting to respond in writing the next day – came hours after Justice Coate said there was no legal reason preventing ministers from publicly answering questions about the hotel quarantine debacle.

Ms Mikakos refused to provide any answer to two questions related to hotel quarantine, stating she "will not be providing a commentary while the inquiry is ongoing".

Premier Daniel Andrews on Sunday defended Ms Mikakos' conduct and was asked during his press conference about how she was coping, in light of her comments on Twitter.

Mr Andrews stood by his Health Minister, saying "she is a very strong person".

"We Victorians are tough, we are resilient."

He said there was a team of thousands dealing with Victoria's coronavirus second surge. "Everyone is working as hard as they can."

But it has recorded its highest single-day death toll from COVID-19 since the start of the pandemic, with 17 additional deaths.

There are now 7854 active cases in Victoria, a net increase of 46 since Saturday.

Get our Coronavirus Update newsletter for the day’s crucial developments at a glance, the numbers you need to know and what our readers are saying. Sign up to The Sydney Morning Herald’s newsletter here and The Age’s here.