A coal mine in the NSW Hunter Valley has leaked the equivalent of more than a million tonnes of carbon dioxide since it was mothballed in 2014 without any penalty or restriction.

Mining giant Glencore’s own annual reports indicate its Ravensworth underground mine continues to emit methane, a potent greenhouse gas, from exposed coal seams. On a yearly basis, the pollution is equivalent to about 33,000 cars on the road, according to the Australian Conservation Foundation, which has released a report on so-called fugitive emissions from fossil fuel projects. 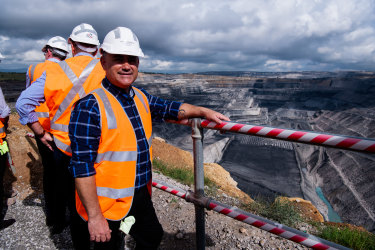 NSW Nationals leader John Barilaro visits the Ravensworth open-cut coal mine in the Hunter Valley earlier this year. A nearby coal mine continues to emit methane despite being under care and maintenance since 2014.Credit:James Brickwood

“We want monitoring and regulation to take into account the staggering scope of emissions from mines under care and maintenance,” Kim Garrett, an ACF environment investigator said. “It’s a regulatory limbo.”

The role of methane in driving climate change is detailed at length in this week’s release of the Intergovernmental Panel on Climate Change’s latest science update. Emissions of methane, which is about 84 times more potent than carbon dioxide on a 20-year timeframe, have been increasing since 2007 from fossil fuel projects and agriculture, the IPCC said.

Glencore declined to comment on the emissions from Ravensworth. The company had agreed to burn off methane from the mine when it got permission to extend its operations in 2010 but the flaring apparently ceased some time after its halted coal extraction in 2014.

The EPA said it did not monitor fugitive emissions from coal mines in the state.

A Planning Department spokeswoman said the department “enforces strict conditions on mining companies to ensure Scope 1 and Scope 2 emissions [related to the extraction and transport of fossil fuels] are minimised throughout the mine’s life cycle”.

“It is a requirement that mining companies report to the federal Clean Energy Regulator, who are responsible for regulation of greenhouse gas emissions,” she said.

Since Ravensworth has apparently been operating in line with its consent conditions, it is time for governments to intervene to force miners to curb emissions, ACF’s Ms Garrett said.

The Hunter mine is just one of many coal mines and gasfields that are emitting fugitive emissions. Such emissions have been increasing their share of the national total as fossil fuel ventures increase, and now amount to about one-fifth of all of Australia’s annual measured greenhouse gas pollution.

Ms Garrett said governments at the state and federal level should pay heed to a recent report from the International Energy Agency that stated, “beyond projects already committed as of 2021, there are no new oil and gas fields approved for development in our pathway [to net-zero emissions], and no new coal mines or mine extensions are required”.

ACF said the Bowen Basin coal mines alone released the equivalent of 1.6 million tonnes a year of carbon dioxide, excluding the impact of burning the fuel.