State governments have been warned not to rush to slap extra taxes on electric vehicle owners, with industry groups warning motorists could end up unfairly footing the bill for bad policy.

The South Australian budget this week imposed a yet-to-be-determined per kilometre charge on electric vehicles, which make up about 0.5 per cent of cars on the state’s roads. 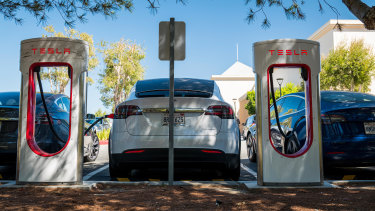 Drivers of petrol and diesel vehicles pay excise on their fuel, which covers the cost of road building and delivers excess revenue for other public spending. But electric vehicles are fuel-free, which means their owners escape the excise duties other motorists incur.

"Someone has to pay for the road maintenance and upgrades and it should be the people using the roads,'' said SA Treasurer Rob Lucas.

The South Australian budget forecast the road user charge would reap about $1 million a year starting from July next year.

Mr Lucas said he was "pretty confident that over the next 12 months, at least one or two other jurisdictions will announce similar road user charges."

The NSW and Victorian governments are considering road user charges but have not indicated their position. A spokeswoman for federal Transport Minister Michael McCormack said there was "no current proposal to introduce a road user charge for electric vehicles given the small number of these type of vehicles on Australian roads".

AAA managing director Michael Bradley praised SA for tackling the issue, but warned a national approach led by the federal government was needed. The Morrison government is developing an electric vehicles policy, which is yet to be released.

The AAA said the SA government should make sure any road user charge is brought in at a "discounted rate" and any revenue should be put towards infrastructure for electric vehicles – which require charging stations rather than petrol pumps.

Electric vehicles deliver a $137 annual increase in government revenue compared to fuel-powered cars, according to a report by Ernst and Young, released in September.

While governments miss out on fuel excise and GST revenue from electric vehicles, Ernst and Young said this is more than compensated for by their registration costs, which are typically greater for the heavier and high end models available in Australia.

Electric Vehicle Council chief executive Behyad Jafari said South Australia’s move made it a "global laughing stock" and it would be a "disaster for motorists if the same happened in other states".

Most electric vehicles models brought to Australia are for the luxury market, Mr Jafari said, because car companies were attracted to other markets like the US where motorists can get up to $7,500 in tax refunds.

"If we look around the world there are a wide range of electric vehicles on the market, which are getting cheaper and cheaper, but they’re not being brought into Australia," Mr Jafari said.

"Automobile companies have planned to bring cheaper cars to Australia in past years, but they have been delayed as other markets offered incentives and proved more attractive."

Electric vehicles account for just 0.6 per cent of vehicles sold in Australia last year. But sales of electric cars, including hybrid plug-ins, more than tripled in the past year to 6718, from 2216 in 2018. The Bureau of Infrastructure, Transport and Regional Economics forecasts 60 per cent of new cars sales in Australia will be electric by 2046.