You know when the lights at a concert dim and every single person in the seated venue instantly leaps to their feet that you’re in for a good night. But how was it ever going to be any other way for Dua Lipa? 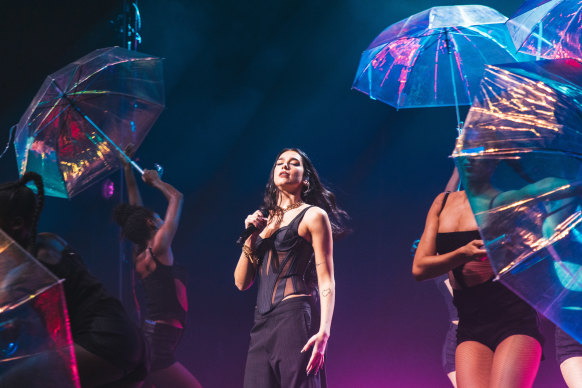 English pop star Dua Lipa performs live during a one-night only sold-out show at the Palais Theatre in Melbourne on October 30, 2022.Credit:Rick Clifford

The English pop superstar last toured Australia in 2018, playing at Mardi Gras and supporting Bruno Mars. On that visit, she performed at St Kilda’s iconic Palais Theatre during her string of small headline shows. But the last two years have seen a meteoric rise for the 27-year-old, whose 2020 album Future Nostalgia was the third-highest selling album of that year, picking up numerous awards.

So, this time around on her Australian tour she’s playing arenas and selling out shows in minutes – but last night she returned to the Palais for a one-off intimate performance, supported by Sydney’s Cat & Calmell and Melbourne’s own Ashwarya.

The show was one of the centrepieces of the Victorian government’s Always Live initiative, which has programmed a raft of live music events, featuring both local and international artists, across the state for the rest of the year. Tickets went on sale to fans via an exclusive ballot, giving them a rare chance to see an artist at the top of their game in a 2500-capacity venue. It had echoes of fellow Aussie favourite P!nk’s exclusive show at the similarly sized Forum in 2012.

Backed by 10 dancers, Dua Lipa was a magnetic force on stage, blitzing through an hour of hits from Future Nostalgia and her self-titled debut album. The show was a scaled-down version of her stadium setup, doing away with her live band and outfit changes but keeping a large screen lit up with projections (a neon-lit travelling road, a glittering disco ball), an impressive, constantly changing lighting rig and impeccably choreographed moves, including tastefully chosen props.

Her strong voice rang out across the room, with only a couple of slip-ups – proof that she does sing live – and her own dancing was on point, nullifying the memes about her awkward moves that went viral a few years ago. The smooth chemistry between Dua Lipa and her dancers was mesmerising to watch – an incredible synchronicity binds them together. 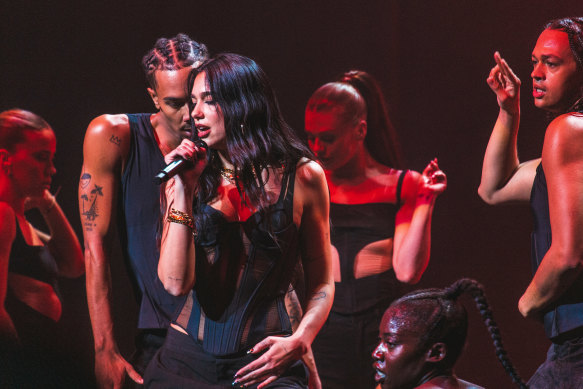 Dua Lipa performs at the Palais in Melbourne.Credit:Rick Clifford

On-stage banter was kept to a minimum, save for the obligatory thank-yous and it’s so good to be backs, but for the ecstatic gig-goers, moving as one, it was all about the music anyway. Playing almost every track from Future Nostalgia, and a smattering of earlier songs such as New Rules and the Calvin Harris collaboration One Kiss, Dua Lipa turned the Palais into a pulsing nightclub.

There were all the hallmarks of a pop spectacle show – dramatic pauses to allow for the audience’s singular voice to shine through, a phone lights out moment for the Elton John collaboration Cold Heart (including the man himself singing from a projected video), an explosion of confetti during the final number Don’t Start Now. The crowd didn’t stop moving for a second. It felt truly special to be there – one of the most memorable and joyous pop shows of the year.