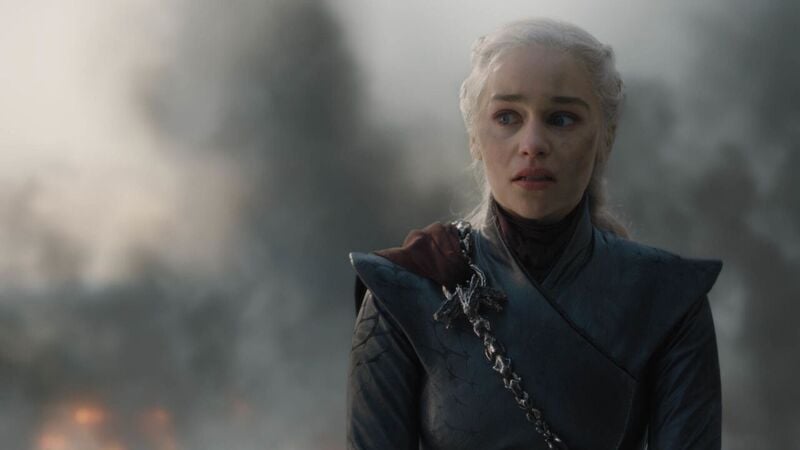 Game of Thrones opens the fifth episode of the eighth season with a prophetic quote from Varys in a conversation with Jon Snow. The young Stark considers the statement a bit of a riddle, as its meaning isn’t explicit, but the phrase tells the audience everything we need to know about the Dragon Queen for this particular episode. Lord Varys states, “I’m worried for all of us. They say every time a Targaryen is born, the gods toss a coin, and the world holds its breath . . . We both know what she’s about to do.” And if we think back to Daenerys history as she begins her ascension to power, we too can anticipate what the would-be queen plans to do upon her arrival to King’s Landing — burn it to the ground.

This phrase comes from the third book in the Song of Ice and Fire book series and speaks to the possibility of Daenerys taking a murderous turn. Essentially, Varys is saying that madness runs in the blood of the Targaryens and where it reveals itself is anyone’s guess. However, when it does reveal itself, the world should beware as is the case with the people of Westeros.

On a narrative level, the destruction of King’s Landing is foreshadowed in Varys own death. Instead of engaging the growing skepticism building around her and attempting earn the adoration she desires from her subjects, she eviscerates a member of her own council to prove she’s deserves respect. In a subsequent conversation with Jon, we get another hint of her growing madness and the carnage to come when she says, “I don’t have love here, I only have fear.” Sound familiar? This moment echoes a sentiment Tyrion often raises about Cersei that her tendency to rule by fear rather than reason is that folly that keeps her from earning the esteem of her people.

While we could certainly point to times throughout the series where Daenerys has not only earned respect but adulation from her followers—the most notable of which being when she’s lifted above the crowd after freeing the slaves of Yunkai — she has several other instances where she’s used her power and her dragons to punish those who’ve crossed her and to threaten those who refuse to bend the knee. Prime examples of this latter occurrence being the destruction of the Dothraki temple during her captivity in season six and Samwell Tarly’s family in season seven.

While the behavior Daenerys engages in during the battle at King’s Landing isn’t atypical, the harrowing way in which she lost Missandei and the truth of Jon Snow’s birthright are undoubtedly the elements that push her over the edge from would-be ruler to Mad Queen. In fact, on “Inside the Episode,” Game of Thrones showrunners David Benioff and D.B. Weiss give a poignant insight into Daenerys’s state of mind prior to the obliteration of the city:

“I don’t think she decided ahead of time that she was going to do what she did. And then, she sees the Red Keep, which is to her the home that her family built when they first came over to this country 300 years ago. It’s in that moment on the walls of King’s Landing when she is looking at that symbol of everything that was taken from her that’s when she makes the decision to make this personal.”

Whether the Dragon Queen fully realizes the people around her have changed their minds about her ability to rule remains to be seen, but the subtext of her actions convey a woman who has hit rock bottom and has nothing left to lose . . . not even the crown.