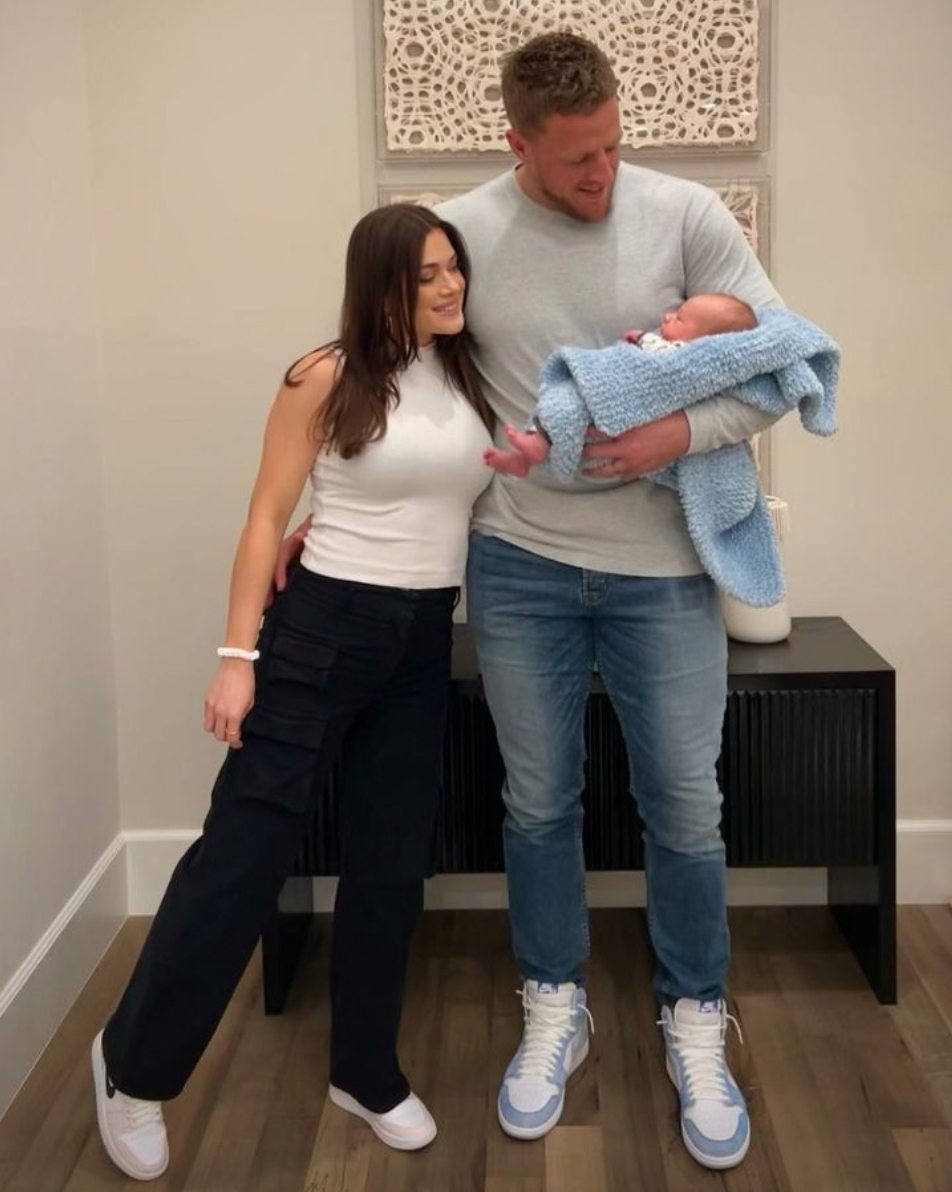 Their first Thanksgiving as a family of three! Arizona Cardinals defensive end JJ Watt shared a photo of his 1-month-old baby with Chicago Red Stars player Kealia Ohai Watt as they celebrated.

“More to be thankful for than ever,” the NFL star, 33, wrote via Instagram on Thursday, November 24. “Happy Thanksgiving from our family to yours!”

The photo showed JJ holding baby Koa, who was wrapped in a blue blanket that matched his dad’s Nike sneakers. The football player was comfortable in a gray sweatshirt and blue jeans while his wife, 30, donned black cargo pants with a white tank top. Both were smiling at their little one for the snap. Kealia replied with two red hearts.

The duo welcomed Koa one month ago. “Love and happiness have reached heights we never even knew existed. Koa James Watt 10.23.22,” the spouses, who married in February 2020, wrote in a joint Instagram post on October 25, alongside a sweet shot of the couple cradling their newborn in the hospital.

On November 11, Watt was asked how little Koa felt about a decision by referee Clete Blakeman mistakenly blew dead a play in which Watt was about to walk into the endzone. Watt joked that his son was livid.

“He was watching so he saw it. He was pissed. He was pretty pissed. It took us a while to get him to bed. We had to calm him down because he wanted to call Clete himself. And I told him, ‘Son, your day will come,’” he joked with reporters ahead of Week 11.

He also spoke about appearing on HBO’s Hard Knocks with Kealia and Koa, joking that their dogs were the real stars. “Any time that I can share the screen with my wife and my son and our dogs, I have to — my wife and I are unbelievably proud of our dogs. They knew the pressure was on and they stepped up to the plate in a way that I’ve never seen,” he quipped. “Our dogs don’t act like that on any walk we’ve ever been on and they were phenomenal. We need Hard Knocks cameras 24/7 when we go on walks because our dogs really crushed it. Tex and Finn — they rise to the occasion.”

JJ and Kealia announced in June that a human would be joining their fur babies, sharing that they “could not be more excited” to be expecting in the fall. They didn’t have a sex reveal but casually dropped that they were having a son in passing. It was so nonchalant that fans wondered if JJ made a mistake. One asked if he accidentally let the news slip, to which he replied, “We didn’t do a gender reveal, we just found out and then told people when they asked.”

The new dad always puts family first, and he’s instilling that in the next generation of the family. JJ has already been putting Koa on FaceTime with cousins Logan, 2, and Brayden, 23 months — who Derek shares with wife Gabriella Watt — he revealed in a birthday tribute to the Pittsburgh Steelers player earlier this month.

“All the football games in the yard when we were kids, the mini hockey battles in the basement, etc. Now we’re FaceTiming each other so our kids can see each other. (Still playing football though!) Crazy! Happy Birthday bro!!” JJ wrote via Instagram on November 7.

The Watt family has had a lot to celebrate in 2022. The athletes’ youngest brother, TJ Watt, tied the knot with his wife, Dani Rhodes, in July.