Warning: this article and accompanying videos may contain distressing images.

When the cats have given up chasing mice and the dogs are at risk of dying from eating rodent poison, farmers across inland Australia have had no choice but to improvise to cope with the massive mouse plague. 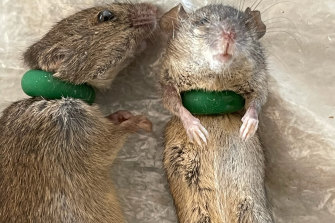 Rubber rings are another favoured method of trapping the mice, as on a farm near Inverell in northern NSW.Credit:Martin Bower

“Fat cat”, the family puss, lived up to his name but even he surrendered. “After six weeks, he’d just given up, ” he said. “The mice were just running over the top of him.”

The mice that did eat poison ended up decaying in the ceiling, within the walls and under the floor boards. “The stench was just unbelievable,” Mr Fleming said.

And so, out came the buckets of water, narrow curtain rails coated in PVC plastic and a sheen of canola oil, and some peanut butter lures, all designed to trap and drown the relentless rodents.

And so, each morning, Mr Fleming would begin the grim ritual of collecting dead mice by the bucketful, easily 300 of them a day. Then they would be buried well away from the house. 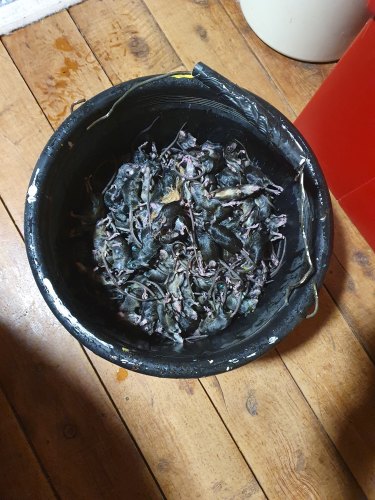 Dead mice ’accumulated each night by the bucketful inside a farm house at Bakers Swamp in the Central West of NSW.Credit:Eris Fleming

“If another drought comes along, they’ll be legless again,” Mr Fleming said.

Ultimately it is going to come down to science rather than makeshift or other methods to control such population explosions.

“The only way you can prevent this is by research,” he said.