A fourth wave of Covid-19 may have started to gain momentum as cases spill over from school kids to their parents, data has revealed.

Kids went back to school after the summer holidays at the start of this month – with most being unvaccinated. 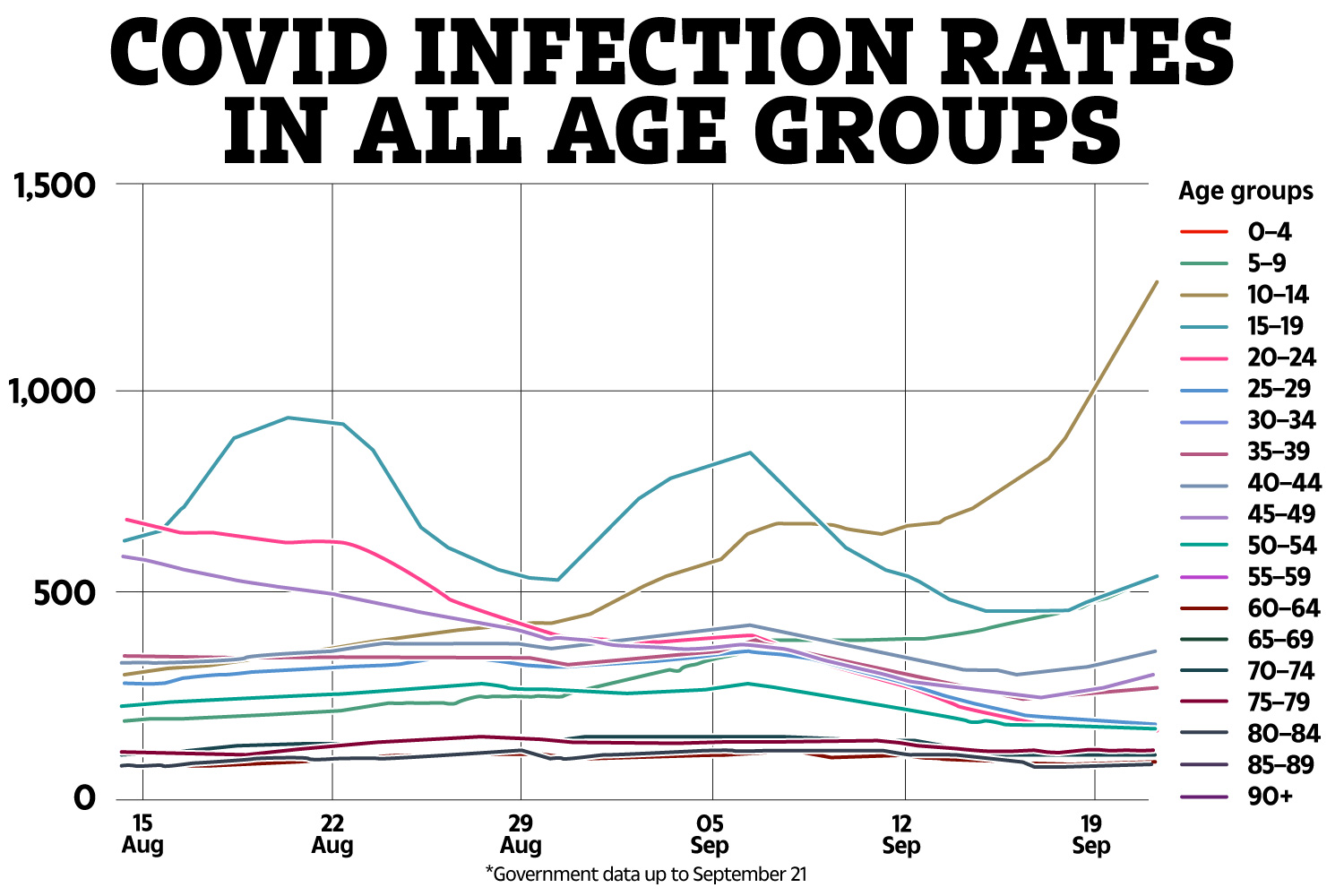 Some teens had received the jabs before starting school again after a push from the government to get young adults and teens jabbed before the new term.

Last week the first doses of Pfizer jab were also rolled out to 12-15 year-olds as health chiefs try to drive cases down in school-aged kids.

While no vaccine is 100 per cent effective, Covid jabs have been proven to reduce the risk of severe consequences from the illness.

Immunity in older age groups is also starting to wain and booster jabs are being given out.

Now data shows that school aged kids could be passing infections onto their parents.Data from the government shows that cases are increasing in those aged 35-50.

For the last two weeks infections have also been going up in school aged kids – evidence that the virus is spreading in schools.

But the rise in cases in people in older age groups could also be down to socialising at the school gates and increased mixing in general.

Data from the Office for National Statistics (ONS) published on Friday showed rates have increased for those aged from two to school Year 11 in England.

Around one in 35 people in Years 7 to 11 are estimated to have had Covid-19 in the week to September 18 – the highest positivity rate for any age group.

The percentage testing positive decreased in all other age groups except for those aged 50 to 69, where the trend was uncertain.

While deaths are falling – cases are still on the up.

Looking at the death toll from the most recent data and the UK's coronavirus death toll has fallen by 60 per cent in a month.

A further 40 people died after testing positive for Covid-19 today – an 18-per cent drop on last Monday.

But the number of people testing positive for Covid has slightly risen – after 37,960 cases are seen today.

It marks a rise of 5.6 per cent on last Friday.

Looking at cases in kids and the data shows that in those aged 10-14- 1.2 per cent of kids in this age bracket tested positive with Covid in the seven days up to September 21.

Cases have also risen slightly in all other age groups up to 19-years-old.

"It is likely they [Covid cases] have gone from children. Parents have protection from the vaccine, but we know the protection is not complete", he told MailOnline.

Millions of vaccines have been given out across the UK with 44.7 million people now having been double jabbed.

Professor Gary McLean said it's likely cases will go up as people spend more time inside.

He explained: "The age groups children pass the virus on to, they're more likely to be going back to work frequently or going out where there is no social distancing, spreading it among themselves.

"I would expect a fourth wave to occur, coupled with a lot of old people that are more vulnerable [to experiencing a] drop in immunity."

Health Secretary Sajid Javid last week said: "Getting the vital protection of the vaccine is now even easier with the national booking service opening to those aged 16 to 17 to book their vaccine.

"We know the vaccine works – with more than 123,100 lives saved, and 24 million infections and 230,000 hospitalisations prevented in England alone.

"So please book your vaccine as soon as possible to protect yourself and your loved ones against the virus." 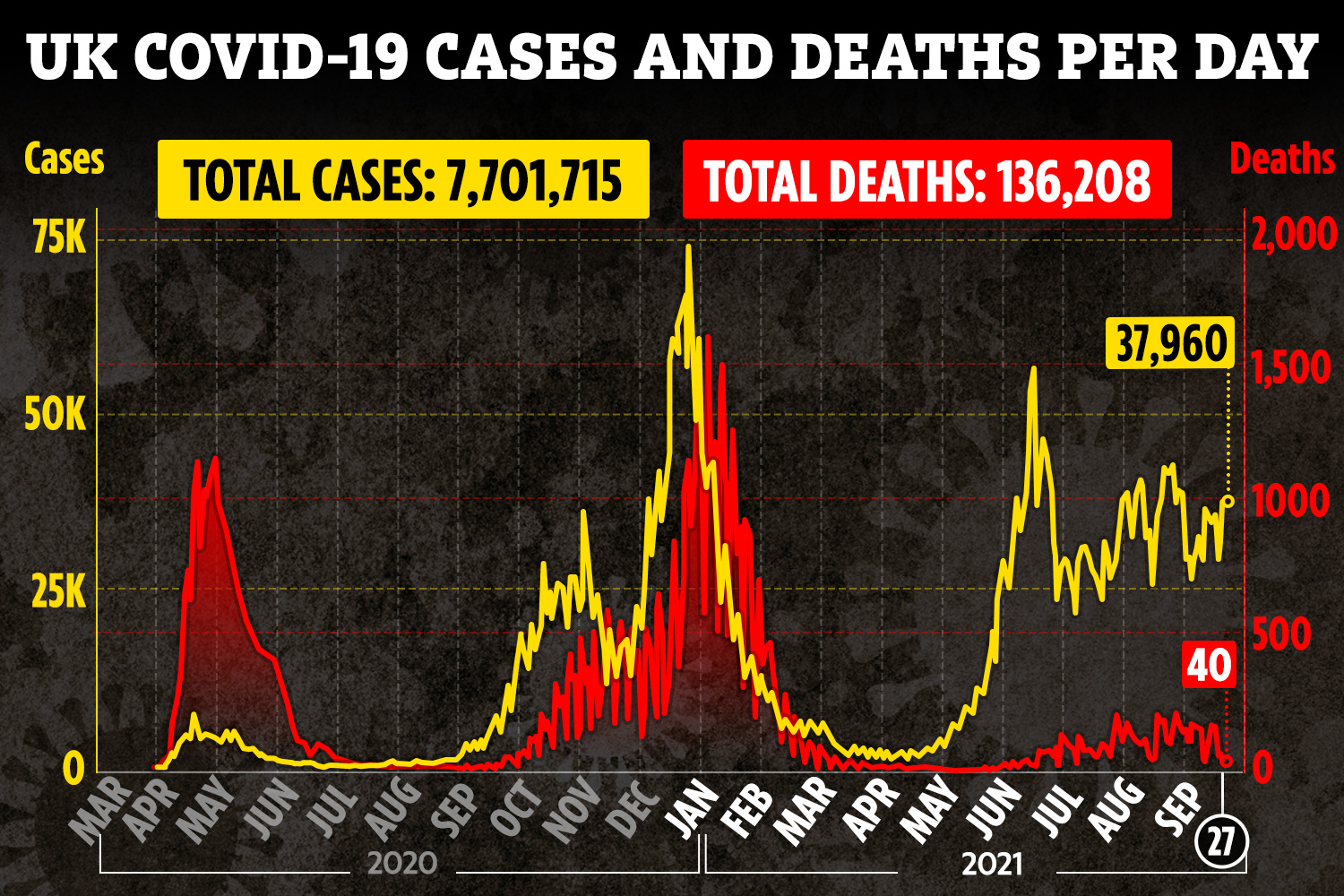