Female federal MPs are reaching out across party lines to set up a group that seeks to grow their ranks at coming elections and could function as a forum for women in Parliament to push for a better workplace.

It’s expected the group being drawn together by the Women for Election Australia organisation will be established within the next couple of months. 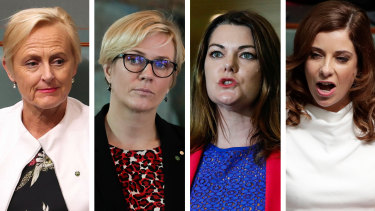 Liberal Katie Allen, independent MP Zali Steggall, the Greens’ Sarah Hanson-Young and Labor’s Anika Wells are supporting the establishment of a group that could function as a forum for women in Parliament. Credit:Alex Ellinghausen/Dom Lorrimer

The cross-party push comes as one of the most experienced members of the Coalition, Russell Broadbent, has asked Prime Minister Scott Morrison to convene a national gathering of women representing all parts of Australia and women’s organisations to work out how to create real and lasting change in response to the tens of thousands who marched this week for justice and safety.

He’s also asked that all cabinet submissions, new policies and legislation have a gender impact statement, saying everyone was responsible and accountable for change but that politicians “need to be quiet, listen and learn”.

“As both an elected representative, and a man, I hear the anger, the hurt, and acknowledge the disregard for women that has led to this fork in our road,” Mr Broadbent told parliament.

“I am horrified at the levels of abuse, intimidation, harassment, discrimination and violence against women in this our great southern land.” 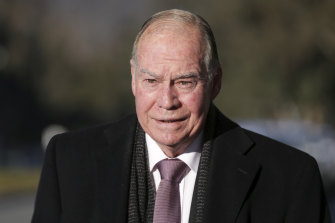 The March 4 Justice rallies around the country on Monday were sparked by former Liberal staffer Brittany Higgins going public with an allegation a colleague raped her in a Parliament House ministerial office in March 2019. Ms Higgins speaking out, along with child sexual abuse survivor Grace Tame winning Australian of the Year, has sparked a wave of disclosures of harassment and assault around the country and a push to clean up parliamentary workplaces.

Liberal MP Katie Allen believes getting more women elected is a vital part of this movement for change.

“We don’t need to argue less we just need to argue better – and in my opinion more women in Parliament will help ensure a more collegial environment for debate,” she said. “Whether it’s engaging in public debate or policy development, joining a party to support a local member or putting their hand up to be elected themselves, we need to do more to make sure women are well-represented at the heart of our democracy’s decision making.“

She sees it as her responsibility – and a pleasure – to “help snowplough for others to follow”.

Dr Allen is an alumnus of the Pathways to Politics program founded by business leader Carol Schwartz, which like Women for Election seeks to give women the skills and networks needed to run for office.

Labor’s Anika Wells said these initiatives were worthwhile to remove the opacity around seeking election.

Labor has its own structures to support women into Parliament, including quotas for preselection and the backing of Emily’s List, which have helped it reach near gender parity at the federal level. The parliamentary party also has a formal caucus committee for the status of women, of which Ms Wells is secretary.

“Since arriving in Parliament this term, I’ve been heartened by the mentoring and structural support that exists within federal Labor, as well as the cross-party collaboration that springs up organically from time to time, usually around issues,” Ms Wells said.

Women for Election chief executive Licia Heath hopes the group can also breed support and solidarity between female politicians and staffers across party lines. She doesn’t want the cross-party group to be seen as tokenistic simply by its timing, noting the first talks were in 2019.

She pointed to the harassment of female politicians, as Liberal MP Nicolle Flint and Greens senator Sarah Hanson-Young have spoken of publicly, as an example of what discouraged women from seeking election.

“How those scenarios improve is by greater engagement in the process, by getting people with a broader set of lived experience in our parliamentary chambers and in the organisational wings of our parties,” Ms Heath said.

Ms Flint, who is quitting politics at the next election because of her experiences, told Parliament on Thursday about the sexist abuse she had received this week since speaking out.

“Here I am having to fight and defend myself again. The online abuse, trolling, victim shaming and blaming, the complete denial of things I have suffered during my time in Parliament that has been aimed at me over the past 48 hours is disgusting and those involved should be ashamed.”

Ms Flint read several emails she had received since Tuesday, including one which called her “a most rancid coward and infamous and endless liar, a consummate, shrivelled dirtbag, a ruling class s-l-u-t, an intellectual disgrace”.

Labor MPs Susan Templeman, Anne Aly and Ged Kearney also revealed in Parliament some of the abuse they have received from strangers.

Sarah Buckley, the chief executive of the Trawalla Foundation that backs Pathways to Politics, said there was an urgent need for “a strong, multi-partisan women’s voice on the issues that matter”. She envisioned a group that could work on policies around sexual harassment, domestic violence and childcare, but also tackle the structural elements of how Parliament functions to make it more practically possible for women.

“We not only need to ensure that parliament is a safe place to work, but that it is a place in which women can thrive,” she said.

Independent MP Zali Steggall suggested the cross-party group could also be a place for women working in Parliament to share their experiences with a view to stamping out bad behaviour.

“Often you tend to excuse behaviour by thinking maybe it’s unique or one-off and by sharing stories and comparing notes you actually can come to realise that certain conduct is occurring more regularly than one might imagine and then it becomes much easier to call it out,” she said.

The government has asked Sex Discrimination Commissioner Kate Jenkins to review the workplace culture in Parliament and the treatment of staffers. On Thursday evening the Senate rushed through legislation to exempt all submissions to this review from freedom of information and the Archives Act after women including Therese Rein and Lucy Turnbull raised concerns people’s confidential stories could become public.