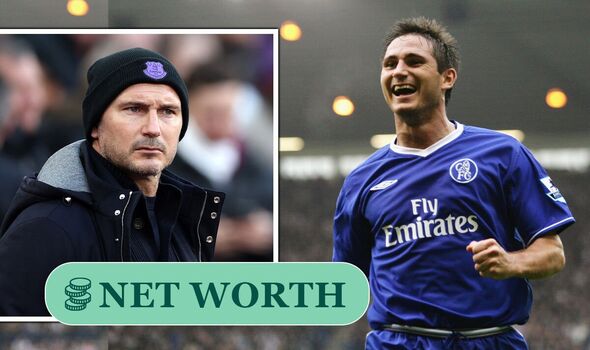 Frank Lampard is a former professional football player and is considered one of Chelsea’s best-ever players. In January 2022, he was appointed manager of Everton FC but was sacked by the club a year later, in January 2023. What is his net worth now?

According to Celebrity Net Worth, Frank Lampard has an estimated fortune of $90million, which is around £75million.

The net worth site reported that the manager had a salary of £9.6million per year at Everton. However, this figure has never been officially confirmed and according to football site Total Sportal, Lampard’s contract with Everton was worth £15million including a signing bonus, a title wins bonus and other bonuses.

The former manager’s impressive £75million net worth is attributed mainly to his years as a midfielder for Chelsea and the England National Team.

Lampard is originally from Romford, east London, and his father, Frank Lampard, Sr was also a professional footballer who played for West Ham United.

In 2001, he moved to Chelsea for a contract deal of £11million and made a record of 164 consecutive Premier League appearances.

He retired in February 2017 at age 38 after playing with New York City and started his managerial career a year later.

Lampard was appointed as manager of Derby County on a three-year contract but in 2019 he became the head coach of Chelsea.

In January 2021, the club announced his replacement and a year later he was appointed manager of Premier League club Everton.

However, due to the team’s continuing poor performance, Lampard was sacked right after the team’s 2-0 defeat to West Ham in January 2023.

Frank is married to Christine Lampard and the couple reportedly own a £10million mansion in London.

It is believed the couple also own a second home in Liverpool where they lived with their two daughters Luna and Isla because of Frank’s former job as manager of Everton.

Christine Lampard revealed that they met at “the Grosvenor House Hotel” on October 6, 2009, she told Pride of Britain Life Changing Stories podcast.

“I was doing the One Show and I was worried about coming in late but I thought, ‘No, I am going to go’.

“Then Frank decided last minute – so technically neither of us was meant to be there at all. It turned out our tables were beside one another. A couple of people claim they were the reason we met.”

Christine is a British broadcaster who has presented TV shows The One Show and Daybreak, Dancing on Ice, This Morning and Loose Women.