Federal minister Alan Tudge has successfully appealed against a Federal Court finding he engaged in unlawful conduct for leaving an asylum seeker in immigration detention after he was granted a protection visa.

Justice Geoffrey Flick blasted the then-acting immigration minister in a decision in September that found he had “unlawfully deprived a person of his liberty” and his “conduct exposes him to both civil and potentially criminal sanctions, not limited to a proceeding for contempt”. 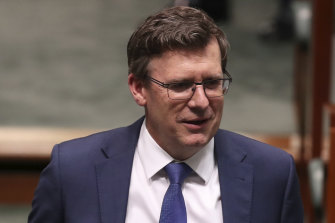 Federal Minister Alan Tudge welcomed the finding, saying it “affirms I had no role in this matter and that Justice Flick’s criticisms of me were unjustified”.Credit:Alex Ellinghausen

“In the absence of explanation, the minister has engaged in conduct which can only be described as criminal,” Justice Flick said in the judgment.

But the Full Court of the Federal Court unanimously overturned this decision on Thursday, finding Mr Tudge “had no relevant knowledge at all of the circumstances which gave rise to both the justified and unjustified criticism”.

“The suggestion that the minister may have acted criminally could only be understood as a personal criticism of the minister raised without according procedural fairness to this particular minister to respond to that criticism,” justices Neil McKerracher, Stephen Burley and David O’Callaghan said in a joint judgment.

The Full Court also found Justice Flick had probably confused Mr Tudge with then-minister for home affairs Peter Dutton when he said “this particular minister [Tudge]” had a history of “disgraceful conduct” and cited an earlier case against Mr Dutton regarding a delayed visa decision.

Mr Tudge, now federal Education Minister, welcomed the finding, saying it “affirms I had no role in this matter and that Justice Flick’s criticisms of me were unjustified”.

However, the Full Court concluded Justice Flick was warranted in strongly criticising the Department of Home Affairs for failing to release the man after he had been granted a protection visa five days earlier.

“We consider the conduct of the minister (through the relevant departmental personnel) to have been left wanting in serious respects during the continued detention of the respondent following the purported grant of a visa to him by the [Administrative Appeals] Tribunal,” the judgment said.

The man, of Hazara ethnicity, arrived in Australia in 2012 and applied in 2016 for a safe haven enterprise visa, a five-year visa that requires the holder to work or study in regional Australia to apply for another visa when it expires. A delegate of Mr Tudge refused that application on character grounds, on the basis the man had been convicted in March 2018 of an offence carrying a sentence of more than a year.

The man successfully sought a review of the decision in the AAT, which took the unusual step of granting a protection visa on March 11 last year rather than remitting it to the minister for reconsideration. However, the federal government did not release him from detention until March 17, following an order of the Federal Court.

The Full Court quashed the AAT’s March 11 decision and ordered the matter again be returned to the tribunal for review.