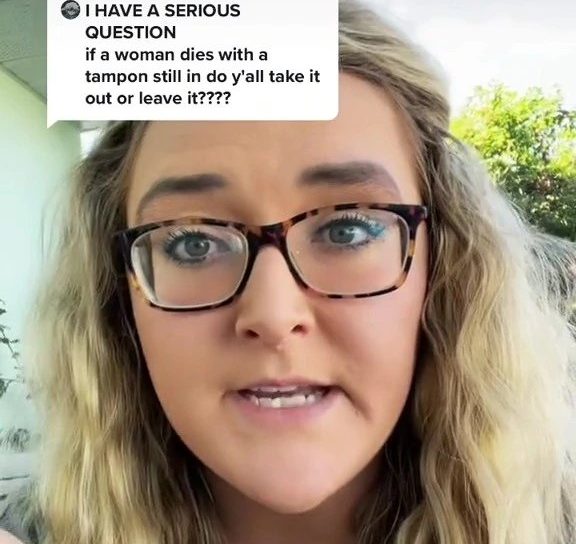 At every funeral you’ve ever been to, a team of dedicated people have worked to ensure things run smoothly.

And while many of us have dealt with funeral directors at some point, the intricacies of their job can be something of a mystery.

Lauren worked in the funeral industry for some time, and recently answered questions from TikTok followers about the trade as part of a video series.

After leaving her most recent role due to a falling-out with her boss, the mum decided to share some trade secrets, demystifying the often-taboo topic of death.

Questions flooded in from Lauren’s 215,000 followers, with one asking her, ‘If a woman dies with a tampon still in, do you take it out or leave it in?’

‘Most women who pass away, if they’re young enough that they’re still menstruating, they usually have an autopsy done,’ explained the former deathcare worker.

Reply to @leximckaylaa When you die, do we remove your braces? #deathtok #funeral #myjob #questions

During the autopsy, tampons or other foreign items would typically be removed from the body, but Lauren has encountered a situation where she needed to do so herself.

If this happens, she said an undertaker would take out the tampon if necessary, but with ‘preauthorised consent from the family to take care of the body’. If the deceased person was being cremated (and therefore not embalmed) then staff wouldn’t check over their remains in this way.

Another follower asked Lauren what would happen to a person’s braces after they die, and whether it’s the responsibility of the funeral director remove them.

‘No, I would not remove braces if you were planning on being cremated or buried,’ she answered.

‘I would leave them completely as they are. And the main reason being that I don’t know how to remove braces!

‘That’s not something they teach us when we go to school to be a funeral director or a mortician, so we would leave those right where they are.’

Questions we’re scared to ask (but want to know the answer to) also included those about ashes.

‘How do I know that I’m getting back the right cremated remains?’ another of Lauren’s followers asked her.

Reply to @judip93 We pick those out after cremation is complete. #deathtok #greenscreen #NeverStopExploring #question #funeral #myjob #fypageシ

Lauren, currently a stay-at-home parent, said it was a great question, adding: ‘Once we bring someone to the funeral home and they are to be cremated, we assign them a little metal ID tag.

‘And that tag stays with them throughout the cremation process. And then we seal the bag with the cremated remains inside.

‘We then print a cremation certificate with the person’s name and that number they were assigned at the crematory (the number on the tag).’

From the legality of Viking funerals to the responses of bereaved people, there’s so much to learn about what happens to our bodies after we pass away.

We typically interact with funeral directors at sad and turbulent times, focusing on grieving over the minutiae of what goes on.

But being able to find out how we prepare our dead for their final goodbye helps us heal too. We’re unfortunately all going to die, and knowing you’ll be respectfully and skilfully cared for after that can lessen your fear around the topic.