Prime Minister Scott Morrison has rebuffed fellow Liberals who fear it is too late to drive coronavirus case numbers back to zero, urging Australians to accept strong lockdowns to suppress the Delta strain before the country can open its economy.

Declaring there were “no shortcuts” to halting infections, Mr Morrison said he wanted case numbers as low as possible before reaching the 70 per cent vaccination target that allows curbs to be eased in Phase B of a four-stage national cabinet plan. 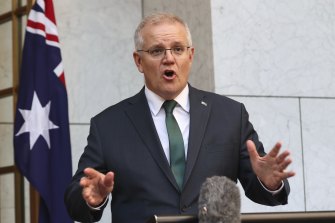 Prime Minister Scott Morrison announces the approval of the Moderna vaccine for use in Australia.Credit:Alex Ellinghausen

The comments fend off doubts from business leaders and some Liberals about whether Australia will ever return to zero cases, given no other country appears to have done so with the Delta strain of COVID-19.

Mr Morrison also tried to hose down a dispute over whether NSW Premier Gladys Berejiklian had defied national cabinet by naming a 50 per cent target as the trigger to ease restrictions, which led to speculation she would move ahead of other states.

The Prime Minister said the NSW target might lead to changes in the lockdown but not the significant removal of restrictions in Phase B under the national deal to aim for 70 per cent vaccination among those aged 16 and over.

Mr Morrison called a press conference at 4.15pm in Canberra to announce official approval for the Moderna vaccine after coming under attack in Parliament when Labor leader Anthony Albanese accused him of announcing too many plans without delivering results.

The Prime Minister warned there were “no shortcuts” to stopping the virus and described the Delta strain as a “complete rule-changer” that required strict controls.

Mr Morrison said Australia had to get through the suppression phase to keep the virus at bay, saying people in lockdown areas had to stay at home and only go out when “absolutely” needed.

“We have to get those case numbers down because when we get to that next phase and we are at 70 per cent, I want us to go into that phase as strong as we possibly can.”

Some business leaders and Liberal MPs told The Sydney Morning Herald and The Age they believed it was no longer possible to reduce case numbers to zero, raising the question of whether restrictions would have to be eased even if there was community spread.

Liberal MP Jason Falinski, who represents Mackellar on the northern beaches of Sydney, said the nation had to set a realistic goal.

“The whole point of the vaccination program is not to get rid of COVID-19 but to live with COVID-19 and we need premiers and chief ministers, and chief health officers, to talk about that future rather than a utopia where there are no viruses,” he said.

Labor MP Mike Freelander, a doctor who represents Macarthur in south-west Sydney, said he believed current settings would not drive case numbers to zero but said this reflected flaws in the state government’s lockdowns.

“I don’t think the state government lockdown is anywhere near hard enough with the level of immunisation we have,” Dr Freelander said.

Mr Morrison flatly rejected business calls for laws or clearer guidance to encourage them to vaccinate staff, saying vaccination was not mandatory under the law and employers had to make their own decisions.

“We are not going to seek to impose a mandatory vaccination program by the government by stealth,” he said.

Business gained support on another front, however, when Therapeutic Goods Administration chief John Skerritt backed calls for employers to gain more rapid antigen tests, which are faster and cheaper than the polymerase chain reaction tests (PCR) used at government centres.

The TGA on Monday approved the Moderna vaccine, which has been used in large volumes worldwide for months, and the government confirmed earlier forecasts that one million doses would arrive in September.

Professor Skerritt welcomed a statement from Moderna that it was considering Australia as a site for a trial of its vaccine in children aged from six months to 12 years, but he said there was no application for the trial at this stage and any such trial would have to be cleared by state regulators, hospitals and the TGA.

“As we move to learn more and more about COVID, it is important to understand the role of these vaccines in children, the same with flu vaccines,” he said.

In an angry exchange in question time, Mr Albanese said Mr Morrison had announced several plans, including one last year that aimed to open the country by Christmas.

“How many plans will the Prime Minister announce before he delivers one?” Mr Albanese asked.

Mr Morrison argued that the virus “sets its own rules” and the government had helped prevent 30,000 deaths, a number calculated by projecting deaths in Australia at the same rate seen in other advanced economies.