Gino D’Acampo, TV’s cheekiest chef talks healthy separation from his wife, teaching his children Italian and the most emotional thing he’s ever filmed

TV’s cheekiest chef Gino D’Acampo could also stake a claim as the most famous Italian in Britain.

He may have lived in the UK, off and on (notwithstanding the second villa at his vineyard in Sardinia), since he was 19, but he wears his heritage triumphantly, and often hysterically, especially when he has one of his lost-in-translation moments on air.

No-one could be more proud of their background, culture and language than Gino, a point underlined by the fact he named his three children Luciano, Rocco and Mia.

He says he taught his British wife Jessica Italian – and she, in turn, taught him English – when they started seeing each other, although, being Gino, he is rather risqué in his joking about this.

‘We met when I was 18, working in a restaurant in Spain. I taught her Italian and she taught me English, but there were a lot of hand gestures to begin with – you, me, eat.’

He mimes a questionable gesture. ‘Once I asked her for a doughnut and she thought I wanted something completely different.’ 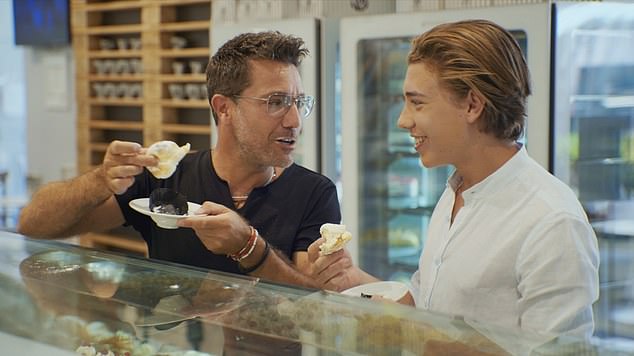 Gino D’Acampo with his son. He winces when his children mispronounce Italian words and wants them to learn now

Since they have been together for 27 years, something clearly worked.

With three kids – aged 19, 12, and 9 – one imagines that at home they must chat away in both languages? Er, no. Gino seems rather horrified by the reality – that his offspring do not speak Italian at all.

In his latest series, Gino’s Italian Adventure (Mondays, 8pm, ITV), Gino is filmed with his children, teaching them how to make the perfect bruschetta. One of his sons mispronounces the word (using a soft ‘ch’ sound in the middle, rather than the correct ‘k’ sound), which is a cardinal sin in Gino’s book. On camera, he looks as if he’s been stabbed.

‘I go white when they mispronounce things,’ he admits today.

‘I am very hot on my kids to learn Italian, but it is not happening. My wife blames me because I am supposed to have been speaking to them in Italian since they were little, but she forgets that when they were little I was working 12 or 15 hours a day.’

Still, it’s not too late, he insists. ‘I am pushing them to learn, now. I’ve said I’m willing to pay for Italian lessons. I’m not going to beat myself up because my children can’t speak Italian, but I’ve told them that this is the chance to do it. They have the chance, time, money, to do it. The only other thing they need is a willingness to learn.’ 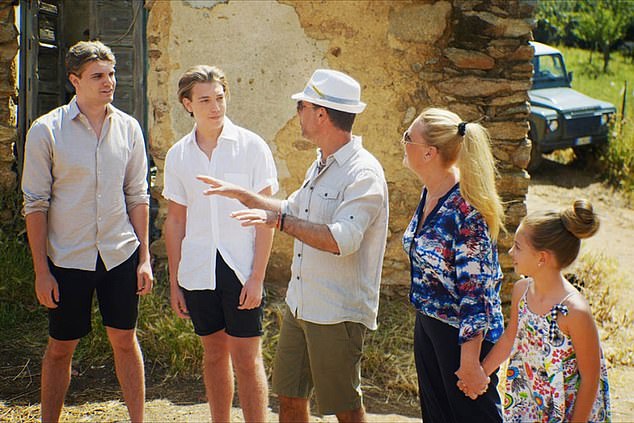 Gino seems to be easing his own children into the limelight too. Luciano is already a part of the family business (he works with Gino in one of his restaurants)

The fact that the next generation of D’Acampos are getting involved in their dad’s programmes is interesting. Gino has, in recent years, made a slew of foodie travel shows, both by himself and (on the show Gino, Gordon and Fred) with his mates Gordon Ramsay and Fred Sirieix.

It’s all a little incestuous. In the last series there was quite the kerfuffle when the gang called home and discovered that Luciano was on a date with Gordon’s daughter Tilly, which could have been tricky.

Luciano is now dating someone else (‘and Tilly is busy with the dancing,’ Gino says, referencing her Strictly Come Dancing role). Relief all round? It actually sounds as if Gino wouldn’t have had a problem with a merging of the two culinary families.

‘I have known Gordon for almost 22 years. He is the is an amazingly generous friend and human. The only thing we disagree on is work. He is a workaholic and he doesn’t understand how I can take six months holiday a year. But it would be a pleasure to be his…how do you say it… in law.’

Now, Gino seems to be easing his own children into the limelight too. Luciano is already a part of the family business (he works with Gino in one of his restaurants) but was it easy to convince them to have the cameras accompany them on a holiday (albeit a working one)?

‘They liked it! They will pretend they didn’t want to do it, but of course they do. They are going to be on telly. All their mates will say ‘we saw you’. And we are a very confident family, and they are like me. They love it.’ 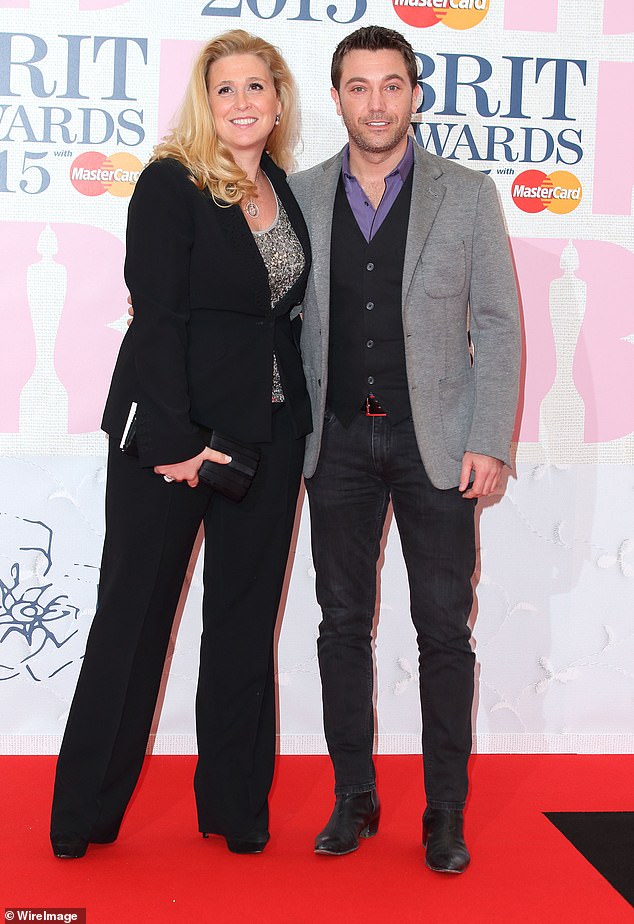 His wife was more tricky to convince, he admits.

‘Every woman I know, no matter how beautiful they are, thinks ‘I look too skinny’ or ‘I look too fat’ when they are in front of a camera. They say ‘I am too white, too red, too whatever’. It’s a normal thing. Jessica said ‘do we REALLY have to do it?’, but at the same time she really wanted a holiday with me, and she did enjoy doing it.’

The culinary travelogue format is one of TV’s stalwarts, and this show – dripping sunshine, as well as olive oil over basil – will be a popular addition to the Autumn schedules.

Over seven episodes, we cover much of Italy – and much of Gino’s early life. He takes each of his children around his own childhood haunts and places that are special to him, generally ending up at a pastry counter or in a cheese shop. They cook on the beach and replicate dishes his mother used to make. His own inlaws even come along for part of the ride.

It’s the non-food elements that have the greatest emotional punch, though. He breaks down when he takes Rocco to the grave of his father Ciro– who died in 2013, at the age of 60 – in his hometown of Torre del Greco, near Naples.

‘It was the most emotional thing I’ve ever filmed,’ he admits, confessing that it was the first time he had seen his father’s final resting place. ‘I had never been. I don’t like cemeteries. I don’t like funerals.’ But you went to your father’s funeral? ‘Just about,’ he says. ‘But I was outside the funeral area. I stayed away.’

Gino’s troubled past is well documented. In his early twenties, he served a prison sentence for burglary (indeed, for breaking into the house of the singer Paul Young), but by the time his dad died he had turned his life around, and he says he’s grateful for the fact his father saw the beginnings of his media career.

‘He saw my career going up. Not to the level it’s at how, but he saw me open my first restaurants, the first books and TV shows that was the best thing.’ He still feels he could have made more effort with his parents, though. His mum Alba died in 2017, also at the young age of 60. ‘I always think I didn’t spend enough time with them, or phone enough. It’s a very human regret. We take it for granted that someone we love will always be there. Then they are not and you think ‘Shit, I should have spent more time with them’.’

Very much a family man himself now, he credits meeting Jessica as the moment where his life turned a crucial corner. They were working together in a Marco Pierre White restaurant in Spain and – once they’d got over the language hiccups – love blossomed. 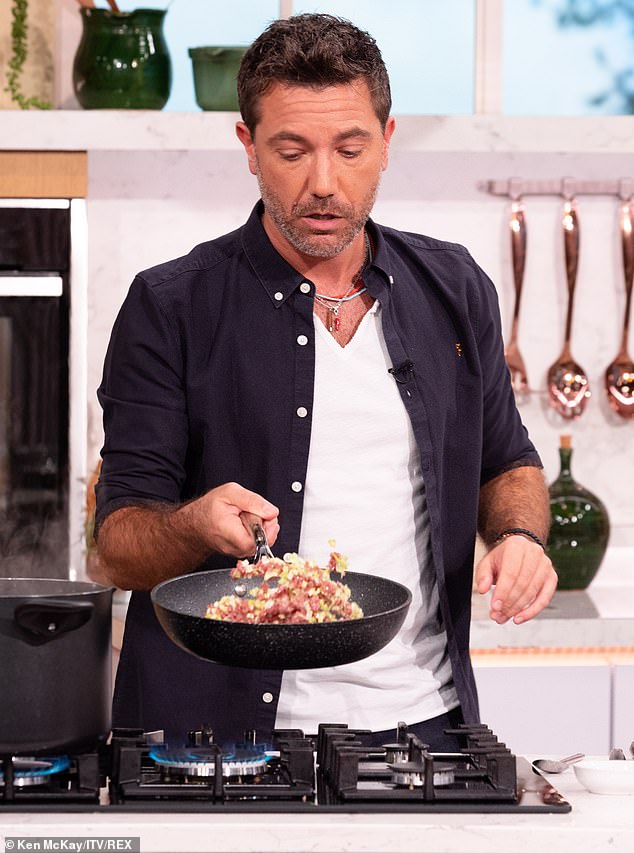 Although he does take six months of the year off, for the other six months he is barely at home, constantly travelling on filming assignments. Jessica holds the fort, he says.

‘She is the ultimate boss of the family. She is insanely organised, the way she holds the family together. She spends exactly the same amount of time with each of the children, taking one out one week and another the next.’

She also looks after Gino, of course.

‘I’m the worst one,’ he admits. ‘She keeps me very straight.’

In this series they celebrate their 20th wedding anniversary with a romantic trip to Puglia, but his tips today on how to stay successfully married are very Gino. First, he says earnestly, when you eat garlic – as you will do, if you are married to an Italian chef – you must eat exactly the same amount as your partner. ‘Otherwise….trouble,’ he says.

More seriously, he says that their marriage has survived because his wife ‘let’s Gino be Gino’. What does this mean? He offers an example, explaining that he’s currently away from home for work, and has been for five days.

He gets quite irate about his (male) friends who do feel the need to phone home when they are away. ‘It’s crazy,’ he says. ‘If you are in the bar with me you stop everything to phone your wife to ask her if the kids are into bed, if she is in bed. What the fu…? I think people do things because they have to not because they really want to.

‘It’s not for me to judge other people’s relationships, but sometimes I think they do it just because it’s what the wife wants, for peace’s sake.’

How odd. I can’t think of many wives (or husbands) who would think it normal not to speak for five days.So Jessica doesn’t put that, er, pressure on you, I ask?

‘Never. Zero pressure. We have an amazing life together but we have our separate lives too. I like to be on my own. She likes to be on her own, so we don’t pretend that I have to phone every night saying ‘I love you’.’

Of course he does love her. He clearly adores her – so much so, he says, that they don’t need to be joined at the hip.

He’s not suggesting any infidelities here, but isn’t the potential for jealousy quite high?

‘No,’ he says, triumphantly. ‘If I was jealous or she was jealous it would be impossible for me to do my job.’

This is all quite intriguing, but did they set out to have a marriage like this, or did it simply evolve?

‘I wanted a life with a woman, but I don’t want my life only and exclusively and always with this woman 24 hours a day. So it was from the beginning that I said, ‘Look, I have to have time by myself. I want you to have that mindset. But if you are happy together, we can do this for the rest of our life’.

It’s an old-fashioned formula, which will sound very little-wife-at-home to some. When he’s actually AT home, he cooks, obviously but do they share other chores, like cleaning? I somehow can’t imagine Gino in Marigolds.

He says he gets assigned the ironing, but other than that, nope. ‘My wife is very traditional. I don’t know why – because she is young – but one of the reasons our relationship works is that she loves – and this is her choice – the idea of pink jobs and blue jobs. Don’t ask me why. It’s what she likes, and I’m very happy with that. So she does the jobs she thinks women should do and I have to do the bin, the DIY and cleaning the car. She wouldn’t allow me to clean the toilet. No way!’.