HENRY DEEDES: An ovation for Widders and Nigel off the sauce? Things have gone loopy

As pundits insist on reminding us, we live in strange political times.

The Brexit vote. David Cameron’s fall. The rise of Jeremy Corbyn. Donald Trump in the White House. All seismic events in the past few years that not even the wisest of owls could see coming.

But Ann Widdecombe walking into a working men’s club in a former mining community to a standing ovation? Friends, this is when you know things have turned positively loopy.

Yesterday it was a rally by Nigel Farage’s Brexit Party in Featherstone, an ex-pit town near Pontefract where 70 per cent of residents voted to leave the EU. 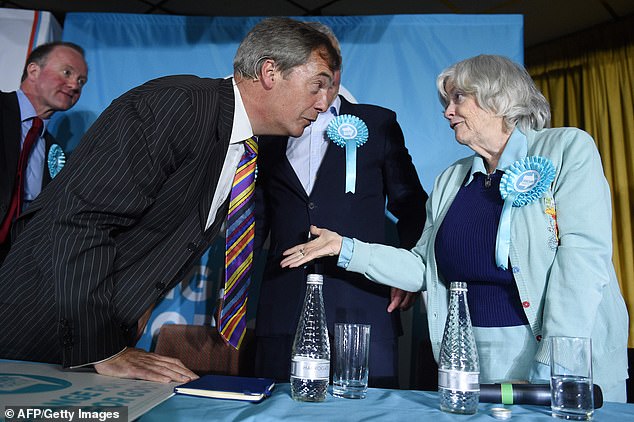 Yesterday it was a rally by Nigel Farage’s (pictured with Anne Widdecombe) Brexit Party in Featherstone, an ex-pit town near Pontefract where 70 per cent of residents voted to leave the EU.

Their MP? Labour Remainer Jon Trickett. Even so, the word ‘Tory’ usually isn’t spoken around these parts unless accompanied by a suitably fruity expletive.

But Widders, who recently turned her back on the Conservatives after 55 years as a member, went down a bomb. By the time she finished her fiery – and occasionally bonkers – ten-minute speech, audience members were practically showering her with carnations. As I say, loopy.

The people of Pontefract are a passionate folk. They want Brexit and they want it now.

At 10am, an hour before the event was due to begin, the Featherstone Working Men’s Club was already half full. Within 20 minutes, it was standing room only and the club’s draught Guinness tap was gurgling away, dispensing mid-morning sharpeners.

First up was Brexit Party chairman Richard Tice, whose polished image and endless credential-flashing didn’t find favour with the audience. He also wore one of those sleek microphone headsets which tend to screech with interference – though perhaps that was caused by the smattering of hearing aids on display in the crowd.

We were introduced to some candidates standing in next week’s EU elections. There was the former director-general of the British Chambers of Commerce, John Longworth, who seemed intent on declaring ‘you couldn’t make it up’ in every other sentence. 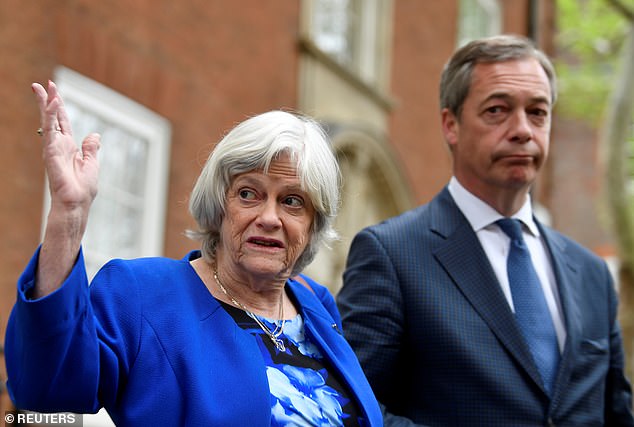 ‘We know what we want!’ she squawked. ‘Yeah,’ interrupted an elderly lady. ‘Ann fer Prime Minista!’ Widders flashed her admirer a toothy grin. She didn’t demur. She shouted, she finger-wagged, she stamped her trotters

And then Widders arrived. All those familiar traits were there. The batty-aunt smile, the dragged-through-a-hedge hair. And that voice. That reedy croak which veers upscale like a badly-tuned clarinet.

‘We know what we want!’ she squawked. ‘Yeah,’ interrupted an elderly lady. ‘Ann fer Prime Minista!’ Widders flashed her admirer a toothy grin. She didn’t demur. She shouted, she finger-wagged, she stamped her trotters.

Then, returning to her post-Strictly panto days in Snow White and the Seven Dwarves, she mocked the Prime Minister for entering into Brexit discussions with Jeremy Corbyn. ‘Oh, do you want a customs union, Jeremy? Certainly. Oh Jeremy, do you want us to be aligned to the single market? Certainly. Just tell me how much you want, Jeremy, and I’ll give it.’

It was woefully unfunny, but I fear her audience lapped it up. Note to the PM: when even Widders is getting laughs at your expense, you’re in trouble. Farage was likewise afforded a hearty welcome. ‘Ni-gel! Ni-gel! Ni-gel!’ they chanted, as he bounced on stage.

There were digs against Yorkshire Labour MP Yvette Cooper (‘traitor!’ screamed the crowd). In the background, Widders curled her upper lip as though inhaling a fine cognac.

There was more pep about Farage than has been apparent previously on the campaign trail. He was springier, a bit more like the boozehound of old. Perhaps he’d watched his Mr Meltdown turn on TV with Andrew Marr the day before and decided it was an ill-advised look.

Later, we heard a sheepish admission which might explain his svelte appearance. He’s on the wagon.

‘This is by far the most important election I’ve ever fought,’ explained a man who has stood – and failed – in seven elections to become an MP. ‘But don’t worry, I’ll be back on it once we leave the European Union!’

Nigel Farage off the sauce? These really are mighty strange times.