HENRY DEEDES: Single-handedly resurrecting the class war, Angela Rayner’s attacks on Raab were as subtle as a blunderbuss

Blimey, they weren’t joking about the ’70s being back, were they? Fuel shortages, threatened blackouts and a possible return to the three-day week are all in the news.

She was giving Dominic Raab a proper shin-kicking yesterday over his recent infamous holiday to Crete.

But not because he wasn’t back here leading crucial Afghanistan evacuation plans as he should have been.

No, no, it was the cost of the darn thing that was getting Ange all riled.

It was disgusting! An insult to working class people! Etc.

I know, I know, not exactly a rapier thrust from the Opposition front bench – but then, Ms Rayner’s attacks always do tend to be as subtle as a blunderbuss.

Behind her, Labour backbenchers cheered her to the rafters. 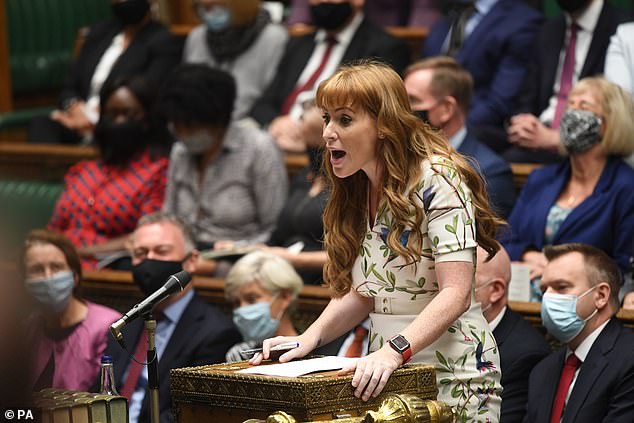 By jingo, they loved it – I haven’t heard them so happy since Boris was forced to delay Freedom Day.

Rayner was on duty because, with the PM in Washington, Sir Keir took the opportunity to stand down for the week. Probably adding polish to that must-read essay he’s composed ahead of party conference.

Ange’s rage was over the Government’s end to the temporary uplift in Universal Credit.

She – or more likely her office – had done the sums and worked out it would take someone on minimum wage 50 days to earn enough for just a single night at the luxury hotel where Raab had decamped.

Dom seemed bemused by this line of attack. The grammar school-educated son of Jewish refugees, he’s hardly one of life’s honking hoorays.

He grinned nervously, resisting the temptation to respond with any flashy shots.

It’s possible he was still stunned by last week’s humiliating exit from the Foreign Office.

Intriguingly or not, as he stood behind the Speaker’s chair before the off, his Cabinet colleagues all had their backs turned to him.

Still, he took pleasure in ordering Chancellor Rishi Sunak to fetch him a glass of water.

Ha, that’ll show who wags the dog! We waited (and waited) for a proper question from Rayner – but bilious class warfare was all she had.

‘The Deputy Prime Minister should go back to his sunlounger and let me take over!’ she snarled. ‘This is a Conservative Party that does not care about working people!’

Meanwhile, the Government benches hee-hawed and tapped their ears – a reference to those £249 Apple headphones the socialist firebrand was revealed to have bought on expenses earlier this year.

Rayner brought up Raab’s run-in with his new successor Liz Truss over the use of Chevening (the Foreign Sec’s country retreat), which she referred to as a ‘taxpayer-funded mansion’. 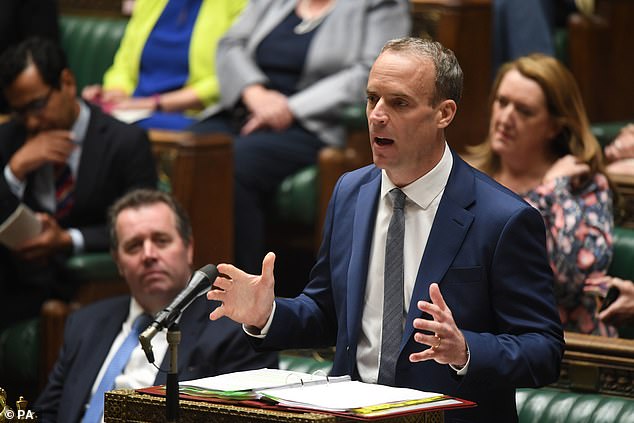 Dom seemed bemused by this line of attack. The grammar school-educated son of Jewish refugees, he’s hardly one of life’s honking hoorays. He grinned nervously, resisting the temptation to respond with any flashy shots.

Raab cleared his throat and pointed out Chevening was funded by a charity. Not a penny of taxpayer cash.

What’s more, should Labour find itself in power, presumably Rayner could be entitled to the pleasures of Chevening. Would she pass up the chance? Would she ever!

Suspect she yearns at the prospect of yanking on her poshest frock and playing a bovver-booted Lady of the Manor.

Once her turn passed, the session fell flat. After all the shrieking and finger-wagging, Labour backbenchers were left wanting more. They’d loved all this class divide stuff.

Not that it’ll get them anywhere of course. Most people respect the desire to get on in life.

Tony Blair got this and won three elections at a canter. Gordon Brown and Jeremy Corbyn didn’t.

Read into that what you will.