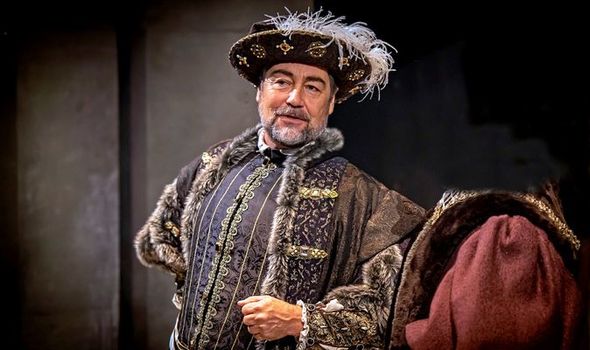 He is reprising his role as Henry VIII in The Mirror and The Light, adapted for the stage from the final part of Hilary Mantel’s acclaimed trilogy, a part he clearly relishes. “Henry is fabulous to play: an overgrown child who’s also very bright, very loving and quite confused. He’s vulnerable and ­capricious,” Nat says. “He’s certainly not the chicken-bone-sucking, thigh-slapping, wench-grabbing Henry we’ve seen so often in old movies.

“Hilary was there in rehearsals which was amazing – like having Oscar Wilde in attendance for The Importance of Being Earnest. Her breadth of knowledge is just extraordinary.”

Mantel’s books and plays tell the story of Thomas Cromwell, who rose from poverty to become the second most powerful man in Henry’s court, but was ultimately ­executed as a traitor.

And what is Nat’s view of Cromwell? “I admire his drive, his ambition. He’s risen from nothing, a bullying blacksmith’s son from Putney and sometimes out of his depth. There’s a moment in the play when Henry confesses to having trouble between the sheets and Cromwell simply doesn’t have the sophistication or emotional ­grammar to offer him the reassuring advice the King obviously needs.”

This third play opened in London a full six years after Nat last played Henry in the second play, Bring Up The Bodies, on Broadway in 2015. So was it like putting on an old pair of slippers?

“Oh yes, in the best sense, because I was developing a role that opened me up as an actor. It felt really comfortable inhabiting him again. Without doubt, it’s been one of my favourite parts to play.”

Glance down Nat’s extensive curriculum vitae and what strikes you most forcibly is its variety. He’s probably still best known for The Inspector Lynley Mysteries, the crime drama that ran for seven years until it was axed by the BBC in 2008. The show, and its star, was known for garnering devoted fans, and they campaigned ­furiously to save it. But Nat is glad to have left viewers wanting more.

“He was posh and arrogant and yet, he wanted to be a force for good,” he says. “It changed my career. But you have to be careful. My mate Jason Connery said to me at the time, ‘Right now, you’re the office poster boy. Don’t become the dartboard.’ In other words, don’t get too big for your boots. That was such good advice.”

Did the show’s ­success mean he suddenly got recognised in Sainsbury’s? “Oh yes, and not just in the UK,” he says. “I remember flying to LA and stopping off at a supermarket. There was a huge poster of me on Sunset Boulevard. I couldn’t get to the end of the aisle without people asking for my autograph. Occasionally, fans could be a bit tricky. But d’you know what? You can’t do it without them.”

The starry roles like Inspector Lynley have been supported by plenty of stage work, including spells at the Young Vic and the Royal Shakespeare Company, mixed with radio plays and a slew of audio books.

As he approaches his sixties, he can look back on a pretty seamless career lasting 35 years… with the occasional wobble caused by stage fright.

“I’ve been known to ‘dry’ in my time,” Nat admits. “I developed terrible stage fright towards the end of the run of Merchant of Venice with Dustin Hoffman on Broadway in 1990. I still feel sorry for Leigh Lawson who was the other actor on stage with me.” Nat had just had three months off to shoot a Nazi spy caper for the BBC called Never Come Back.

“When I returned to play Bassanio and then the run was extended by three weeks, my body just shut down. I was exhausted. I opened my mouth in my very first scene with Leigh and I had no idea what came after the first line.

“It was really scary. It was like a blue funk descending. My knees were buckling. I was sweating buckets. So I turned to Leigh and said out loud, ‘I think we should start this all again.’ In front of 1200 people on Broadway. Somehow we managed to stagger on.”

His first big TV role was in a Second World War series called Piece of Cake in 1988. “I played a pilot who got killed at the end of it. I had two uncles, my dad’s brothers, both of whom perished in the war. I got the part on December 21 and, for Christmas, Dad gave me one of their flying scarves. I’ve never sobbed so much over a present in my life. We watched it together, both of us fighting back tears.”

Nathaniel is the youngest of four children from a high-achieving family. His father was Sir Peter Parker, boss of British Rail, and his writer and physician wife, Jill. His eldest brother, Alan, runs a successful PR company which also employed his sister, Lucy, before she set up her own media agency. His other brother is film director Oliver Parker.

“Dad was certainly something of a showman and he loved acting at ­university. He was also incredibly supportive of me when many parents wouldn’t have encouraged a son to become an actor.” Nat certainly hit the ground running straight out of drama school. By the time he was 28, he was playing Laertes to Mel Gibson’s Hamlet on film.

“He was really helpful, full of useful advice although he was a fan of practical jokes. Whoopee cushions, tripping people up, getting them called to come on set when they weren’t needed… Still, it’s not everyone who gets to kill Mel Gibson.”

Big stars, in Nat’s experience, don’t ­necessarily have big egos. “For instance, Dustin would come in half-an-hour early for Merchant of Venice to run through our lines together. He didn’t need to do that.”

“This was a $150 million film and at one moment it overwhelmed me,” he admits. “I was shooting a scene with Whitney at a mock-up of the Oscars in front of 1500 ­people, 500 of them cardboard cut-outs. I walked down the stairs to the microphone – and dried. But, because these were meant to be the Oscars, everywhere I looked there were screens with my words on autocue. Thank you God!”

He loved working with Whitney. “She was ­unbelievably beautiful with a vivid personality, although you could sense the vulnerability beneath the surface. A true artist.” When Nat was offered the part of Rawdon Crawley in Vanity Fair, he had doubts and sought the opinion of his wife, the actress Anna Patrick (they’d met years before at the RSC).

“Rawdon’s a gambler, then he falls in love and morphs into a besotted dad. ‘Nat,’ she said, ‘it could be your story.’” He laughs. “It’s true, I used to have a real passion for the horses.” The arrival of his two daughters changed all that. Angel is now 25 and a writer/singer/actress; Raffi, 23, wants to be a director.

Most recently, he can be seen ­co-starring alongside Matt Damon, Ben Affleck, Adam Driver and Jodie Comer in the costume drama, The Last Duel. “I play Jodie’s father. She’s extraordinary. Look at the way she took the bull by the horns playing all those characters, all those accents in Killing Eve. She’s achieving real stardom; she’ll still be a major star in 20, 30 years, no question.”

He hadn’t met Matt before. “And he’s just as lovely as everyone said. It reminded me of Judi Dench. I worked with her on a TV play called Absolute Hell set in a Soho club Like Matt, you keep waiting for a chink in the armour. But it never comes.”

As we speak, he’s writing a period drama for TV. “With a fantastically good part for me, surrounded by a fantastically good cast! It’s funny. I’m 59 and I thought my energy levels would be declining by now. But they’re increasing. You’re looking at an ambitious and happy man.”