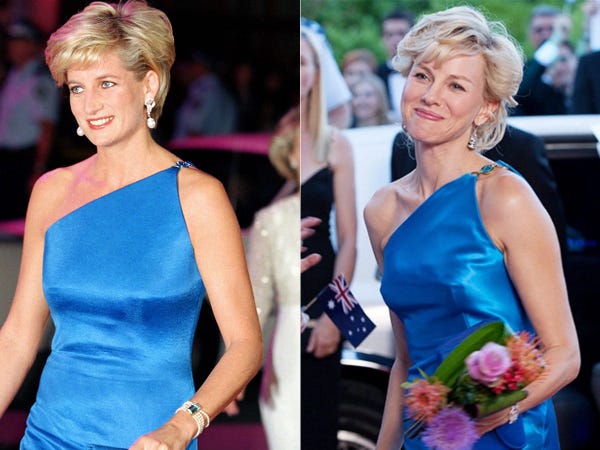 Over the years, there have been countless books, movies, and TV shows made about Princess Diana's life.

During production of TV shows and movies, the actors playing the princess get blue eye contacts, wispy hair, and a radiant smile, transforming them into the Princess of Wales. The next actor to depict her on screen will be Emma Corrin, who will play the iconic role in season four of "The Crown," due to be released in November.

Here are all the actors who played Princess Diana since 1982 and what they looked like compared to the real princess.

In 1982, Caroline Bliss played the new princess in a TV movie about the royal wedding. 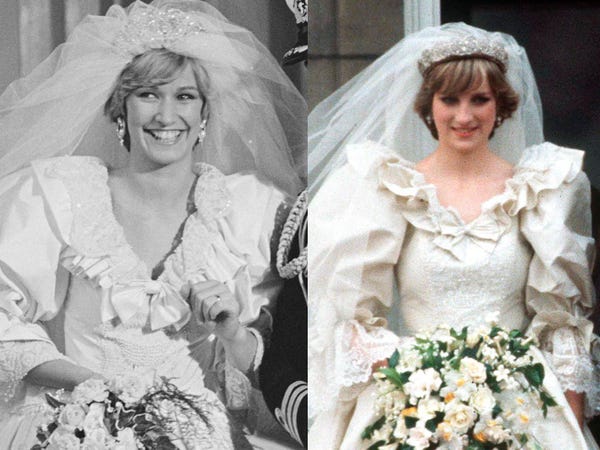 Bliss played the role of Diana "with reasonable accuracy," according to The New York Times in 1982.

The publication went on to explain that the "script for the ABC opus did attempt to make brief references to certain pressing realities" when compared to the other network movie that came immediately after.

The same year, CBS released a similar TV movie about the royal wedding, with Catherine Oxenberg playing the role of Princess Diana. 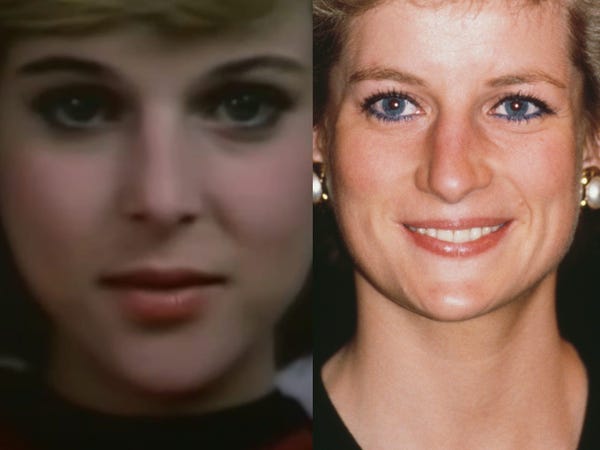 Just a few weeks after ABC's movie, CBS released a similar film titled, ''The Royal Romance of Charles and Diana," which also chronicled the royal wedding.

"The CBS film, unfortunately, makes her something of a Pollyanna, or a Cinderella — a sweet innocent sprite upon whom a fairy godmother bestowed a few crucial wishes," The Washington Post wrote in 1982 about the portrayal Diana.

Nicola Formby played Princess Diana in "The Women of Windsor" in 1992. 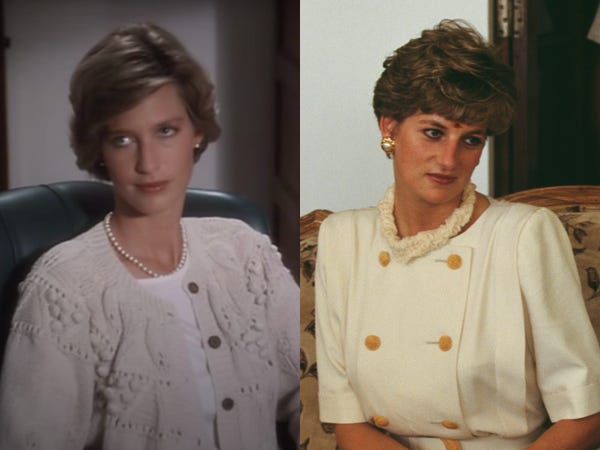 CBS aired "The Women of Windsor" in 1992 to tell the story of Princess Diana and Sarah Ferguson, the Duchess of York, both of whom married into the royal family. In this TV movie, Formby took on the role of Diana, which Variety called an overall flat character.

"'The Women of Windsor' is a good-looking but unabsorbing rehash of the marriages of the Princess of Wales and the Duchess of York," Patricia O'Connell at Variety wrote in 1992. "Two of the main exposition devices — voice-over from a reporter and newspaper front pages — are a poor substitute for fully developed characters and interaction between them." 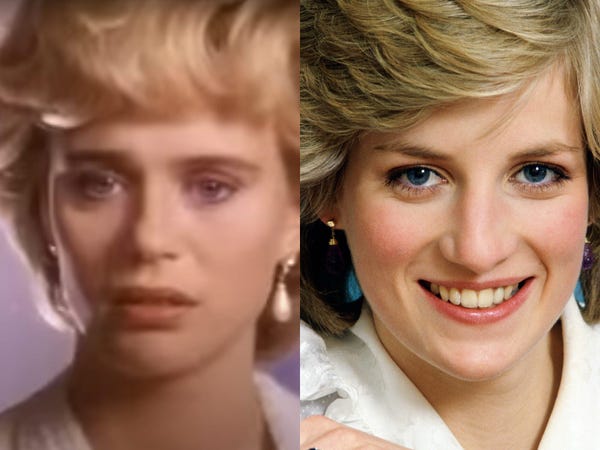 Based on the bestselling novel by Andrew Morton, NBC's film adaptation was meant to be an inside look at the royal couple's rocky and volatile relationship. In 1983, Entertainment Weekly rated the movie a B+, explaining that the director was able to make a "classy-looking movie about a distinctly un-classy aspect of the British upper class."

The publication also wrote that Scott Thomas played Diana with "great charm" but did not resemble the "angular princess."

In 1996, Julie Cox was cast as Diana in the CBS movie "Princess in Love," which told the story of her reported affair. 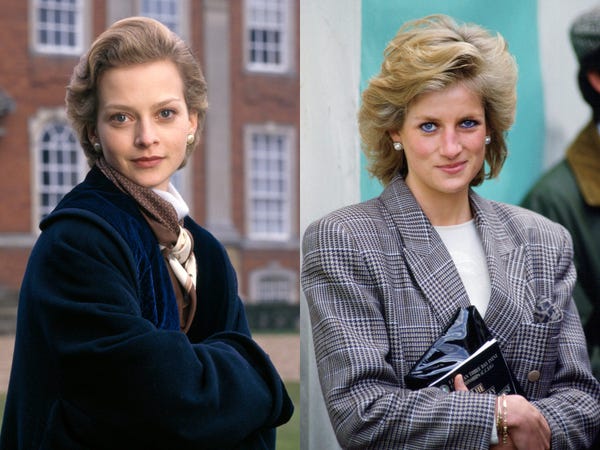 Based on the bestselling book, "Princess in Love" was a CBS film that chronicled Diana's extramarital affair with her former riding instructor. Cox played the princess after signing onto the project just a few days before filming began, People reported.

"Cox is no body double for Di, being brunette (they dyed her hair) and, at 5'4″ — six inches shorter," People wrote in 1996. "And she's oblivious to Windsor-mania. She never read the book, she says, because 'I thought I would hate it. I thought, If I read it, I'll have a hard time taking the script seriously.'"

A year after Princess Diana died, "Diana: A Tribute to The People's Princess," aired with Amy Seccombe in the lead role. 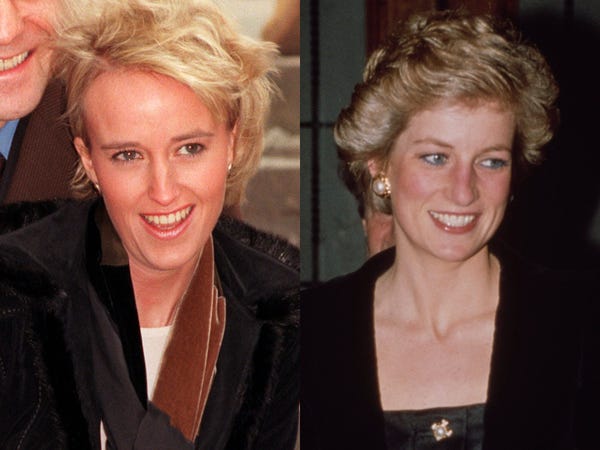 "Diana: A Tribute to The People's Princess" showcased the final year of Diana's — played by lookalike Seccombe — life, highlighting her relationship with Dodi Fayed and her relationship with her two children, according to RadioTimes. The film culminates with the car accident that killed Diana in 1997.

TLC made a dramatic documentary in 2007 about Diana's final days. Genevieve O'Reilly played the princess in a series of reenactments. 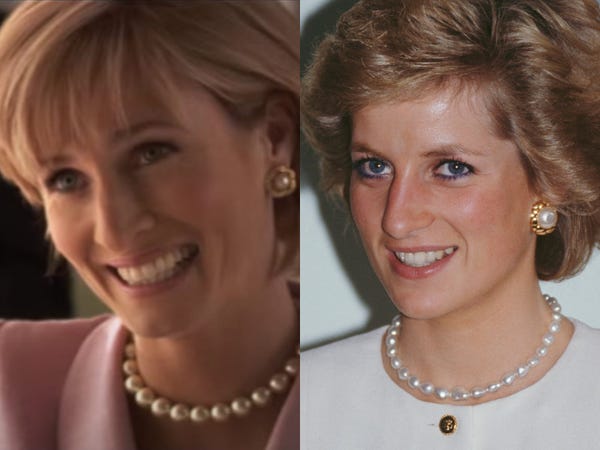 "Diana: Last Days of a Princess" was billed a docudrama, which mixed real-life interviews with those close to her and dramatic reenactments of the days leading up to the car accident.

According to the New York Times, O'Reilly's portrayal was a realistic one.

"'Diana' doesn't deify the princess," the publication wrote in 2007. "It portrays her as needy but manipulative, loving but flawed — in other words, as a human being. Blending documentary techniques and scripted drama, it gives a surprisingly credible picture of the princess's last summer."

In 2013, Naomi Watts played the royal in "Diana," which concentrated on her relationship with Hasnat Khan. 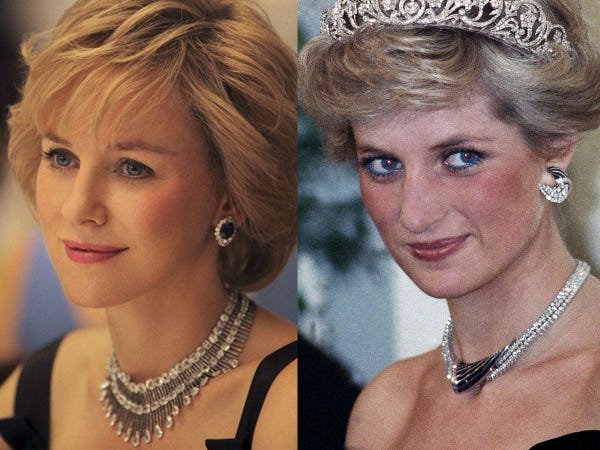 "Diana" premiered in theaters in 2013 to poor reviews, earning an 8% Rotten Tomatoes score. But the New York Times said Watts' performance was one of the best parts.

"Anchored by Ms. Watts's sympathetic performance, it humanizes the woman behind the smile, the helmet hair, and the myth," the publication wrote in 2013.

Watts told the Daily Mail that she felt like she connected with Diana's spirit while filming the movie.

"There were definitely moments when I felt Diana's presence – I dreamed about her a lot, too, and that's a first," Watts told the publication in 2013. "I kept wondering to myself: 'Would she have liked it?' So I found myself constantly asking for her permission to carry on." 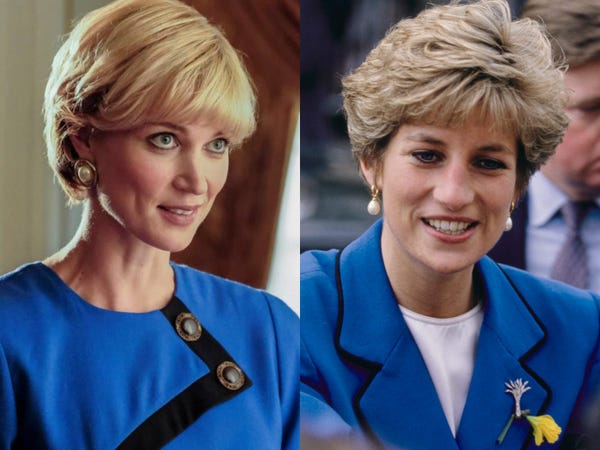 "Harry & Meghan: A Royal Romance" premiered on Lifetime in 2018 and followed Meghan Markle and Prince Harry's new relationship, while "Harry & Meghan: Becoming Royal" debuted in 2019 and followed the couple's first year in marriage. Although the actors who played Harry and Meghan changed between movies, Soper played Princess Diana in flashback scenes in both movies.

"I didn't pay attention to the whole Royal scene – I was a little southern girl," Soper told Stuff in 2018. "However, I do very much recall seeing her in the magazines and seeing this woman hounded by the press. I remember being very interesting by her. Then of course, with the accident, I remember being shocked like the rest of the world and feeling sad, so sad."

Emma Corrin is set to play a young Princess Diana in the fourth season of Netflix's "The Crown." 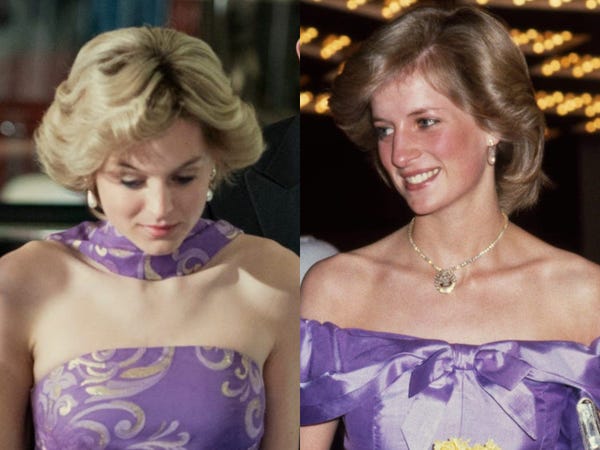 "The Crown," which recounts the life of Queen Elizabeth by decade, is about to dive into the Charles and Diana storyline in its upcoming fourth season. Corrin will play the role of the budding royal alongside Josh O'Connor, who is playing Prince Charles.

"Emma's doing a brilliant job, and it's breathtakingly accurate; she looked the spitting image [of Diana], and it's kind of extraordinary," O'Connor told Harper's Bazaar in 2019. "So that's kind of spooky."