How horses are helping our NHS heroes to heal: Covid left many frontline nurses battling trauma. Now some are finding support with a unique kind of therapy

Watching a young Dina Shale cantering around fields on her beloved Welsh mountain pony, few would have guessed just how awful the little girl’s life was.

Shortly after Dina’s seventh birthday, her father began sexually abusing her on a nightly basis.

The man whose role was to protect her instead told his daughter that if she ever spoke of it to anyone, he would kill her.

When it comes to traumatic childhoods, it’s hard to imagine anything worse.

Looking back, Dina, now 50, says the one good thing she had in her life, the only thing that kept her sane, was her pony, Beauty.

It was that bond that led Dina to open an equine therapy centre, where horses are used to help people identify, process and heal trauma. In the past year, visitors have included a growing number of NHS workers. 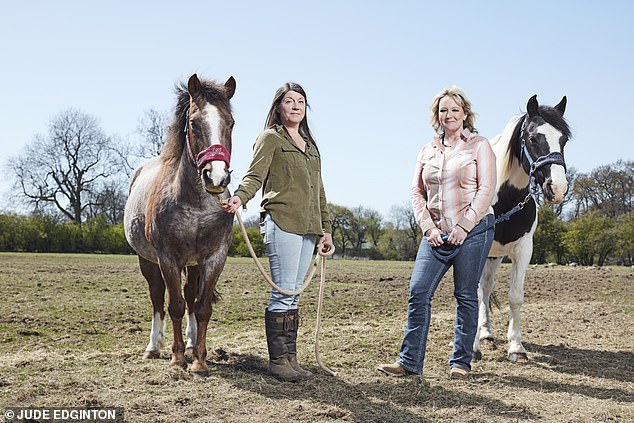 ‘I learnt early on there was only one way I could find any solace, and that was with my horse, the only being in my life who showed real empathy, sensing when I was unhappy and providing much-needed comfort,’ says Dina, a married mum of two, who lives in Hinckley, Leicestershire.

‘If I was angry, or anxious, Beauty wouldn’t let me climb on her back or get too close, so I quickly learnt I needed to calm myself, slow my breathing and my movements if I wanted to spend time with her — something that proved incredibly useful in all areas of my life.’

As Dina entered adulthood, she suffered a host of debilitating symptoms, including anxiety, depression and flashbacks.

She became a mum to Joseph and Georgina in her 20s, but it wasn’t until she was in her 30s that she sought therapy, and was diagnosed with complex post-traumatic stress disorder (CPTSD), the result of repeated abuse, rather than one incident.

However, she didn’t feel that talking helped. Instead, recalling and recounting the terrible experiences only made her worse.

It was while taking Georgina for riding lessons that Dina was reminded of the joy and calm she always felt around Beauty, and she set out to discover how horses can be powerful aids to healing.

At 35, Dina came across a book by Linda Kohanov, a U.S.-based leader in equine-facilitated psychotherapy, who believes horses can teach us about everything from leadership and assertiveness to relationships and intuition. 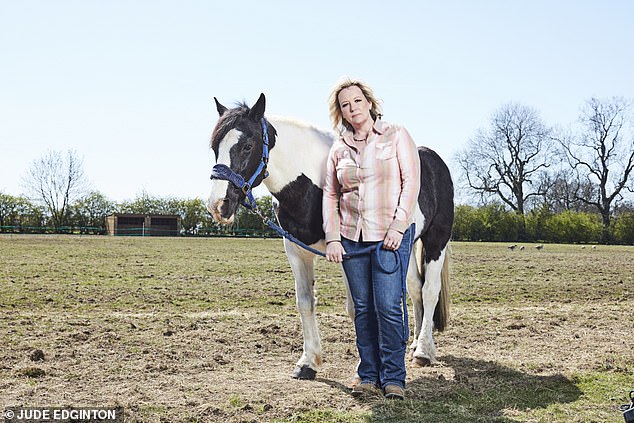 Now she runs the not-for-profit organisation The Way Of The Horse, using the animals to help others — including those working on the Covid frontline.

Launched in 2015 and set in the rolling countryside of Lutterworth, The Way Of The Horse has ten therapy horses — eight of which are rescue ponies. Last year, it received National Lottery funding.

Its latest offering is Highway To Healing, which runs a paid-for course aimed at middle-aged women with unresolved trauma, many of whom have neglected their own needs for decades while caring for families.

Run online, the team of practitioners includes a neuropsychologist, hypnotherapist and meditation teacher. Participants will be able to watch footage of horses and learn how these animals can help them tune into their bodies, cope with stress and anxiety and heal from trauma.

Dina says some people make the mistake of thinking horses are just servile, as they are forever being put to work. But actually they are highly intuitive; prey animals whose only defence against predators is their ability to detect threats and danger.

They are experts, in a way humans once were, prehistorically, when our instincts to run and hide were often our only defence against sabre-toothed tigers and bears.

Centuries of evolution mean our nervous systems now struggle to differentiate between real threats and perceived ones — such as flashbacks and reminders of traumatic incidents — which can cause so much debilitating anxiety and panic attacks. This is where therapy horses come in.

‘In the immediate aftermath of a trauma, a horse, like most animals, releases negative emotion by allowing its whole body to shake,’ says Dina. ‘Humans, by contrast, tend to absorb trauma, suppressing our emotions.’ 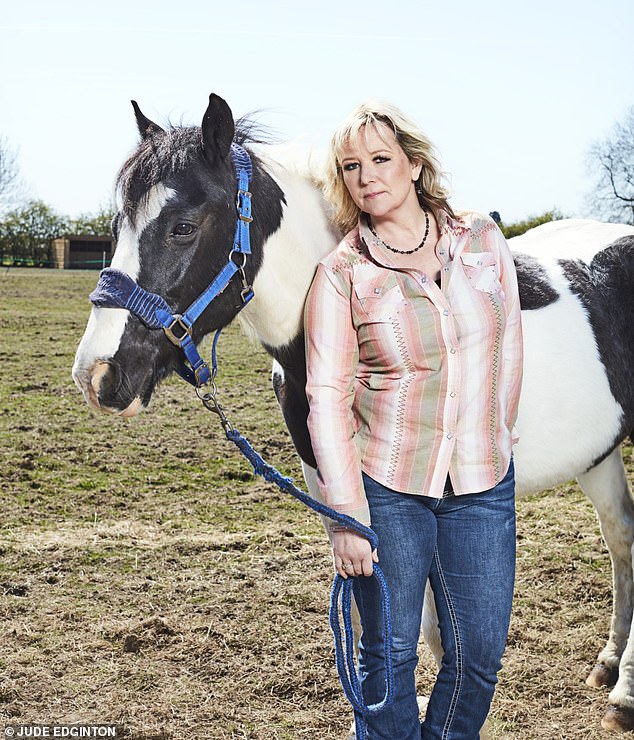 Through a 12-week Project Pony course at The Way Of The Horse, Dina and her staff help them to reconnect with, then process or release, the negative feelings.

Project Pony has helped 45 people in the past year, many working as nurses, paramedics and police officers in the pandemic.

Amanda White, 50, a sister on an intensive care ward in the Midlands, where hundreds of Covid patients have been treated since March last year, is among them.

She says: ‘I went from managing one really sick patient — the norm in ICU — to managing three or four, as well as trying to support junior staff and other nurses with no intensive-care training who had been drafted in.’

She is haunted by calling Covid patients’ relatives on FaceTime so they could say their final goodbyes. During the second wave, just one in ten of those put on ventilators survived, and in one horrific two-day period there were 11 deaths in Amanda’s unit. On top of this, her 17-year-old daughter is suffering from anorexia and was last year admitted to a psychiatric ward for four months after her weight became life-threateningly low.

Amanda discovered The Way Of The Horse four years ago while researching therapies for her daughter. While at first the teen had been unwilling to engage with the process, Amanda recalled its calming effect on her and, in January this year, contacted Dina who suggested she enrol on the Project Pony course herself.

‘Being in nature with the horses provided a wonderful escape from the day-to-day demands,’ says Amanda. ‘It really helped me calm the constant fight-or-flight reactions in my autonomic nervous system and cope with my roles as a nurse and mother.’ 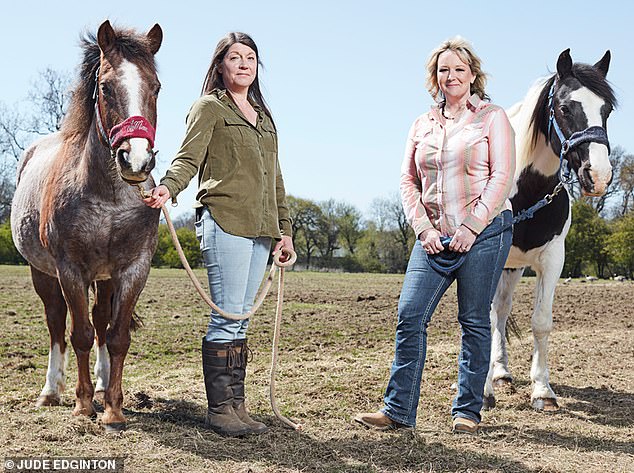 Amanda White, 50, (pictured left) a sister on an intensive care ward in the Midlands, said the pony course has helped to calm the constant fight-or-flight reactions she experiences

Then, in February, Amanda’s nephew, who was just 24 and in hospital with kidney problems, died from Covid.

‘It was the straw that broke the camel’s back,’ she says. ‘Mourning my nephew opened Pandora’s box, and all the grief I’d felt for every one of the patients we’d lost over the previous year came pouring out.’

Amanda was diagnosed with post-traumatic stress disorder and has been signed off work ever since. The one thing that has kept her going is the Project Pony sessions.

‘The difference in the way the ponies react to me if I am calm, compared to when I’m like a coiled spring, is incredible. This course enabled me to tune into my feelings and self-soothe with the help of controlled breathing and meditation.’

She is now preparing for a phased return to work.

Project Pony involves ‘liberty work’, where clients are taken into a round pen with one of the horses and helped to get back in touch with their emotions. ‘We ask the client to rate how anxious they are feeling, on a scale from one to ten. But the biggest indicator of their mood is the horse’s reaction to them,’ says Dina. ‘If a person is angry, the horse will sense it and assume these emotions are evidence of a potential predator.

‘It will stick its neck out, push its ears back and bare its teeth, all visual signals to the client to keep his or her distance.’

It is in helping the client tune into the emotions triggering their stress response — and encouraging them to release those feelings, by sobbing or screaming, self-soothing, gently rubbing the opposite arm with each hand or placing hands on their chest — that anxiety and stress are eased.

In other sessions, Dina and her team teach clients to recognise early signs of panic, from heart palpitations to sweaty palms, and coach them in coping strategies such as breathing exercises and meditation. 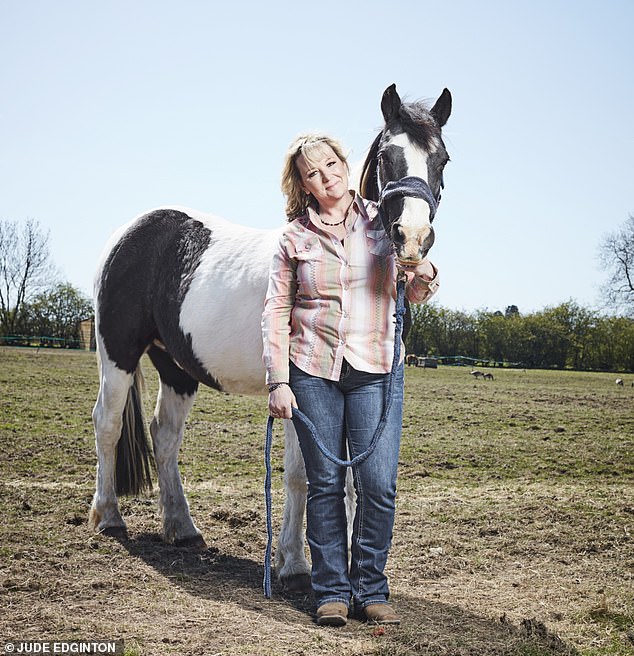 Diana (pictured) who was abused until her periods started at age 14, said she was angry when her dad died without justice being done

Dina says: ‘Our autonomic nervous system regulates bodily functions from heart rate and breathing to digestion and pupil dilation. It is what controls our fight-or-flight response, though these are not the only two reactions we can have to stressors — we might also freeze or even fawn.

‘The latter was how I coped. The only way I knew how to keep myself safe was to placate my father so he didn’t carry out his threat to kill me.’

The abuse continued until Dina was 14 and her periods started. Worried that if his daughter fell pregnant his crimes would come to light, he stopped.

Then, when Dina was 16, her parents separated and her mother (from whom she is estranged) moved out.

Her younger brother, then 12, went to stay with their maternal grandmother. Dina was left alone with her dad, until he announced a few months later he wanted her to leave as he had his ‘own life now’.

Dina moved in with a boyfriend — who was to become her first husband — and his family, before her grandma took her in, too.

Three years ago, by which time she was divorced from her first husband and married to Derek, 56, she courageously decided it was time her father paid for his crimes, and contacted police.

He pleaded not guilty and was to be tried at Warwick Crown Court in September, but died of cancer, aged 73, in January.

‘I didn’t feel at all sad my dad was dead, just angry that he’d died without justice being done,’ says Dina. And it evoked another emotion: crippling fear. ‘The memory of him saying he would kill me if I told anyone was embedded deep and, even dead, he held this terrible power over me.’

Dina coped as she had done aged seven, finding solace and release from the fear in her beautiful horses.