How YOU can be lord or lady of the manor! Grand homes boasting royal connections hit the market – including a Devonshire pile that belonged to the Duchy of Cornwall and a London mansion where King Edward VIII seduced Wallis Simpson

Royal fans are champing at the bit for the return of Netflix series The Crown this weekend.

The historical drama features some of England’s most regal locations, including Belvoir Castle – which stands in as Windsor Castle, Ely Cathedral, The Old Royal Naval College and Hatfield House, the childhood home of Henry VIII’s children.

If you have aspirations of becoming lord or lady of the manor, there’s currently an array of opulent homes on the market, all boasting royal connections.

The grand properties, listed with estate agency Knight Frank, offer a variety of connections to the Royal Family, with some dating back to Tudor times.

From a majestic Grade I listed family home once owned by the Duchy of Cornwall to the London mansion where King Edward VIII seduced Wallis Simpson, wealthy buyers can snap up their own piece of royal history. Surrounded by landscaped gardens and boasting its own lake and stream, this magnificent seven bedroom home was built in 1547 for local MP Peter Sainthill, and once hosted the ill-fated Charles I, a friend of the politician’s.

Its principal bedroom is named after its regal guest – The King Charles Room – after the monarch slept there during a visit in 1644. King Charles was tried and executed for treason five years later.

From 1874 to 1976, the property was owned by the Duchy of Cornwall – the private royal estate currently run by Prince Charles – and has hosted a visit from the Queen.

It’s been sold several times since the 1980s and is currently on the market for £3million – offering a rose garden, indoor swimming pool, an 18th century dining hall and a 16th century drawing room, with decorative period carvings throughout. 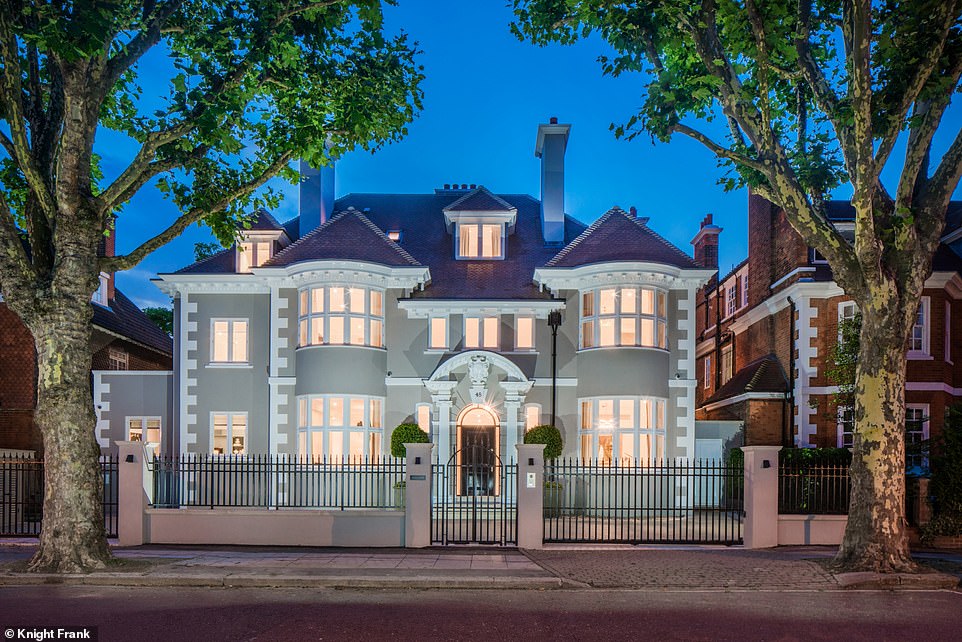 This home in London’s Primrose Hill is thought to have hosted romantic trysts during Edward VIII and Wallis Simpson’s courtship and is up for sale for £28.5million

The Queen’s uncle King Edward VIII shocked the nation when he chose love over duty in 1936, abdicating the throne to marry Wallis Simpson, an American divorcee.

Now the home in London’s Primrose Hill thought to have hosted romantic trysts during the couple’s courtship is up for sale for £28.5million.

And Wallis wasn’t the only woman Edward seduced at the property – he is believed to have had an affair with the lady of the house before falling for the American socialite.

The house belonged to Viscount Furness – one of the richest men in Britain – in the 1930s, and his wife Thelma is rumoured to have enjoyed a dalliance with Edward following a joint trip to East Africa in 1930.  It was Thelma who introduced the king to Wallis.

The detached eight bedroom mansion, set behind a carriage driveway on one of the area’s most sought after streets, offers exceptionally large entertaining areas which are flooded with natural light. 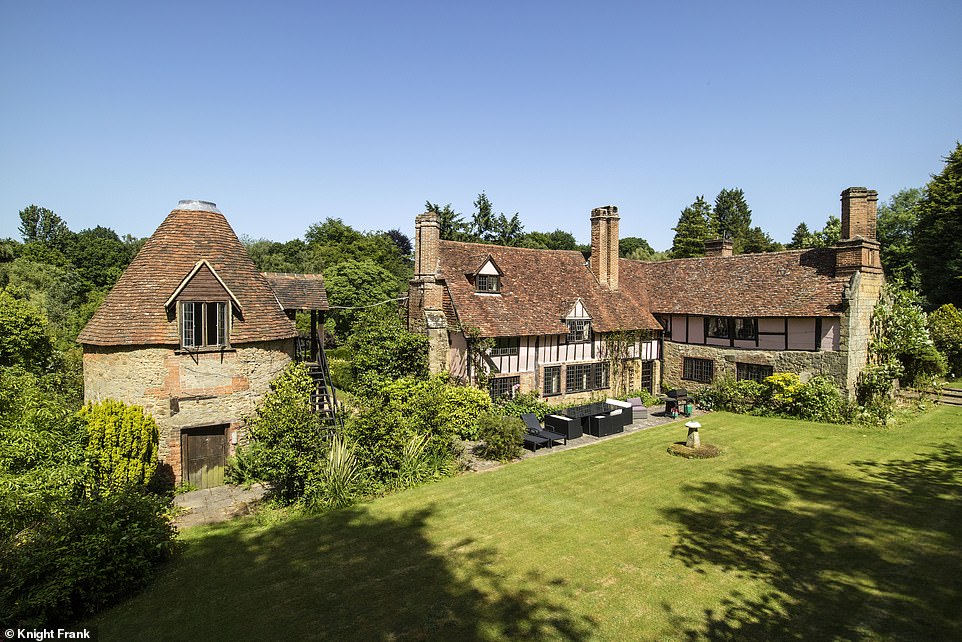 It’s rumoured that the Queen Mother used to play in the gardens of Crockham House, while monks are believed to have used the Oast House for brewing beer

Crockham House is a Grade II listed country house understood to have been built in the 15th century with later additions.

It was owned in the 1930s by Alice Bowes-Lyons, the Queen Mother’s aunt and the gardens were designed by Octavia Hill, who co-founded the National Trust.

It is rumoured that the Queen Mother used to play in the gardens, while monks are believed to have used the Oast House for brewing beer.

The house retains many of its original features including exposed timber beams, an inglenook fireplace, delightful wooden floors and 17th Century panelling. 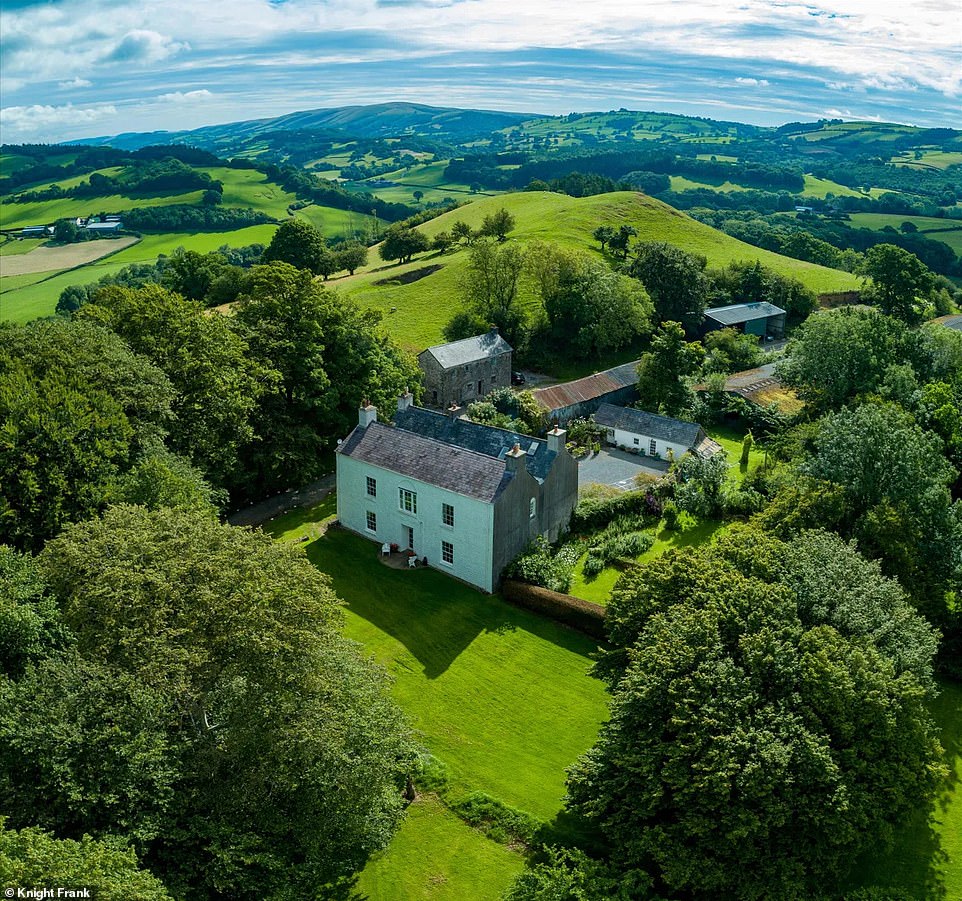 Fancy being neighbours with Prince Charles? This beautiful country estate on the edge of the Brecon Beacons National Park is just three miles away from the Prince of Wales and Camilla Parker Bowles’ Welsh home Llwynywermod.

While the five-bedroom, three bathroom house is in need of modernisation, it has two well-proportioned reception rooms with high ceilings and further period buildings within the wider estate.

The highest point of the farm offers views of Llyn Y Fan Fach, where the story of Lady of the Lake originates. 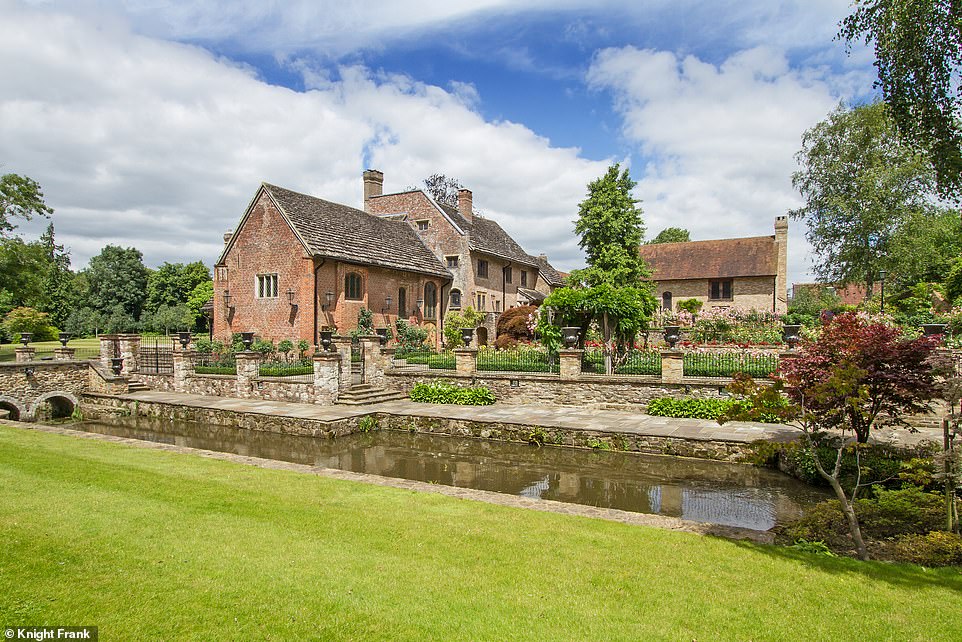 Constructed of handmade bricks laid in Flemish bond under a beautiful gabled Horsham stone roof, Chesworth House was once home to Catherine Howard

Before she left to become the fifth wife of King Henry VIII, young Catherine Howard lived at Chesworth House, situated within the grounds of Denne Park.

The Grade II listed Tudor country house dates from the late 14th century and had various additions made to it over subsequent centuries. It was owned in early medieval times by the de Braose family and later by the Howards, Dukes of Norfolk.

Catherine had flings with a kinsman and her music teacher before marrying the king; however, temptation got the better of her and she became involved with a courtier which, allied to reports of previous dalliances at Chesworth, resulted in her trial and execution in 1541.

It’s situated at the top of a long tree lined private driveway, giving it peace and seclusion, and the Arun River runs across the front of the property and provides a number of lakes and ponds within the 23.5 acre grounds. 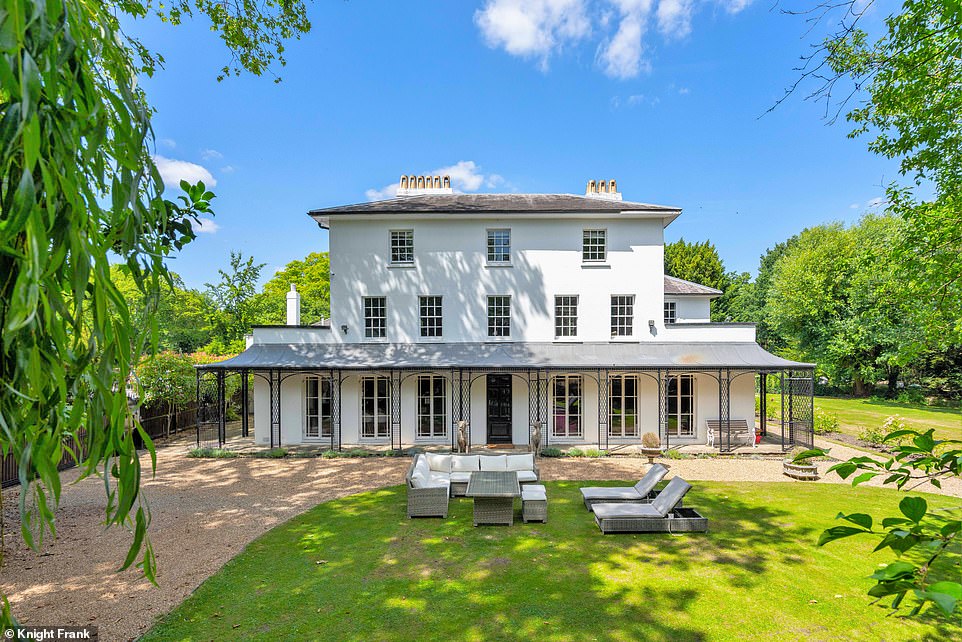 This stunning home in Dulwich, south London backs onto Dulwich Common, once a royal hunting ground used by Charles I and his courtiers

With a carriage driveway, a wraparound southerly sweeping garden and a separate annex, this landmark Grade II listed Georgian Dulwich Village detached home is believed to have been built in 1721.

It is one of several 18th century houses that back onto Dulwich Common, once a royal hunting ground used by Charles I and his courtiers.

The well maintained grounds also have a stream that runs along the easterly boundary of this landmark five-bedroom home. 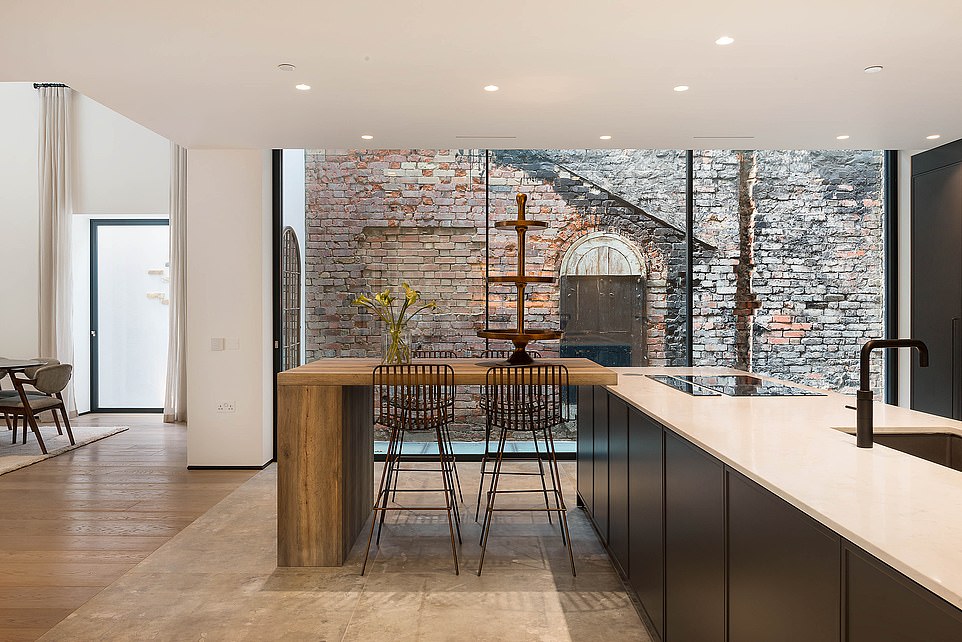 This Chelsea pad features an ancient listed wall (pictured) looked on from the kitchen and breakfast room, reputed to once hold the entrance to Henry VIII’s hunting lodge 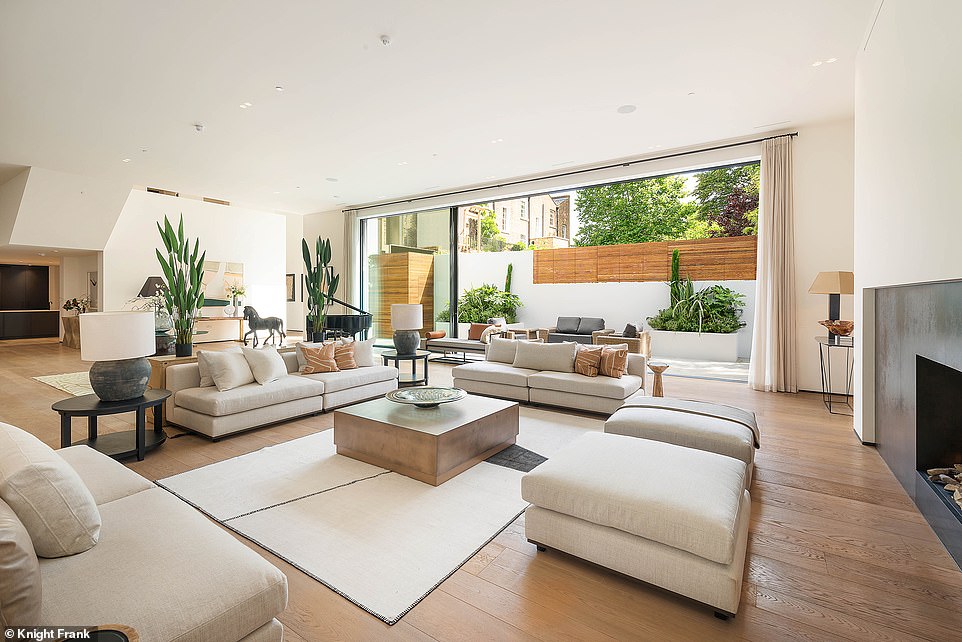 The incredible, studio-style reception room is almost 2,000 sq ft in size, while its five double bedroom suites are similarly impressive

Nestled among the Queen Anne and Grade II listed properties that are synonymous with Old Chelsea, this unique house is discreetly tucked away behind beautifully crafted wooden automatic gates and off street parking for two cars.

Having undergone an extensive redevelopment, the stylish pad, set over two floors, features an ancient listed wall, looked on from the kitchen and breakfast room, reputed to once hold the entrance to Henry VIII’s hunting lodge.

The incredible, studio-style reception room is almost 2,000 sq ft in size, while its five double bedroom suites are similarly impressive. The pick of them is the master suite which boasts a dressing room, large bathroom and a study that gives access to the private west facing roof terrace. 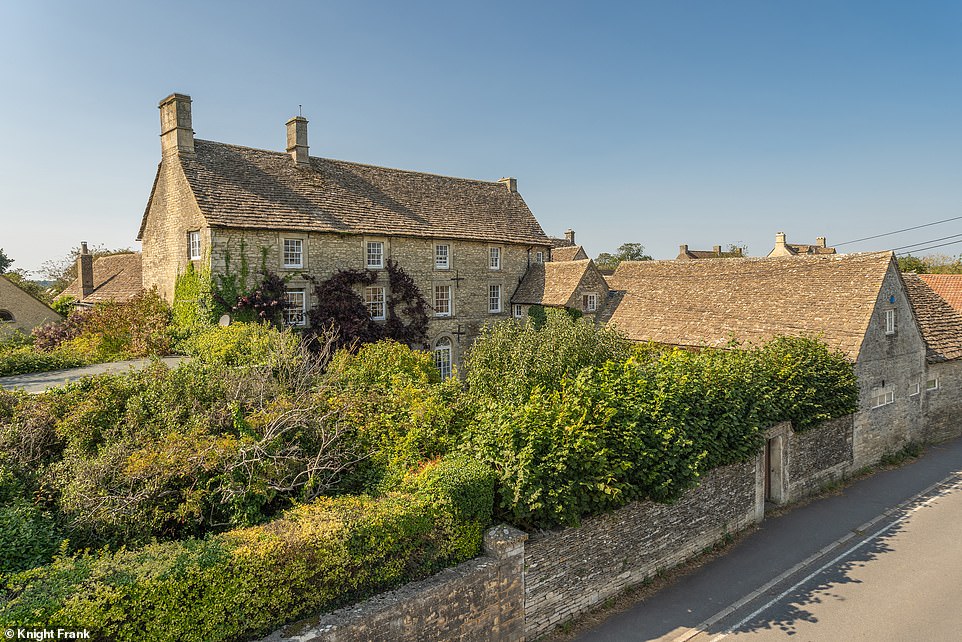 Bridges Court is a Grade II listed country home with history dating back beyond the 18th century. It comes with a three-bedroom barn conversion, tennis court, swimming pool and up to around 30 acres of land.

The majority of its land is to the west, running to the neighbouring Badminton Estate where the infamous horse trials, a favourite of Princess Anne and Zara Tindall, are held.

The property was once the home of Sir Stewart Menzies, head of the British Secret Service, MI6, and is ideal for entertaining with a reception hall, an impressive full height drawing room, sitting room and library. There are period features throughout and open fires.

Before they left for America, Prince Harry and Meghan are rumoured to have looked at a property in the popular South Cotswold village. 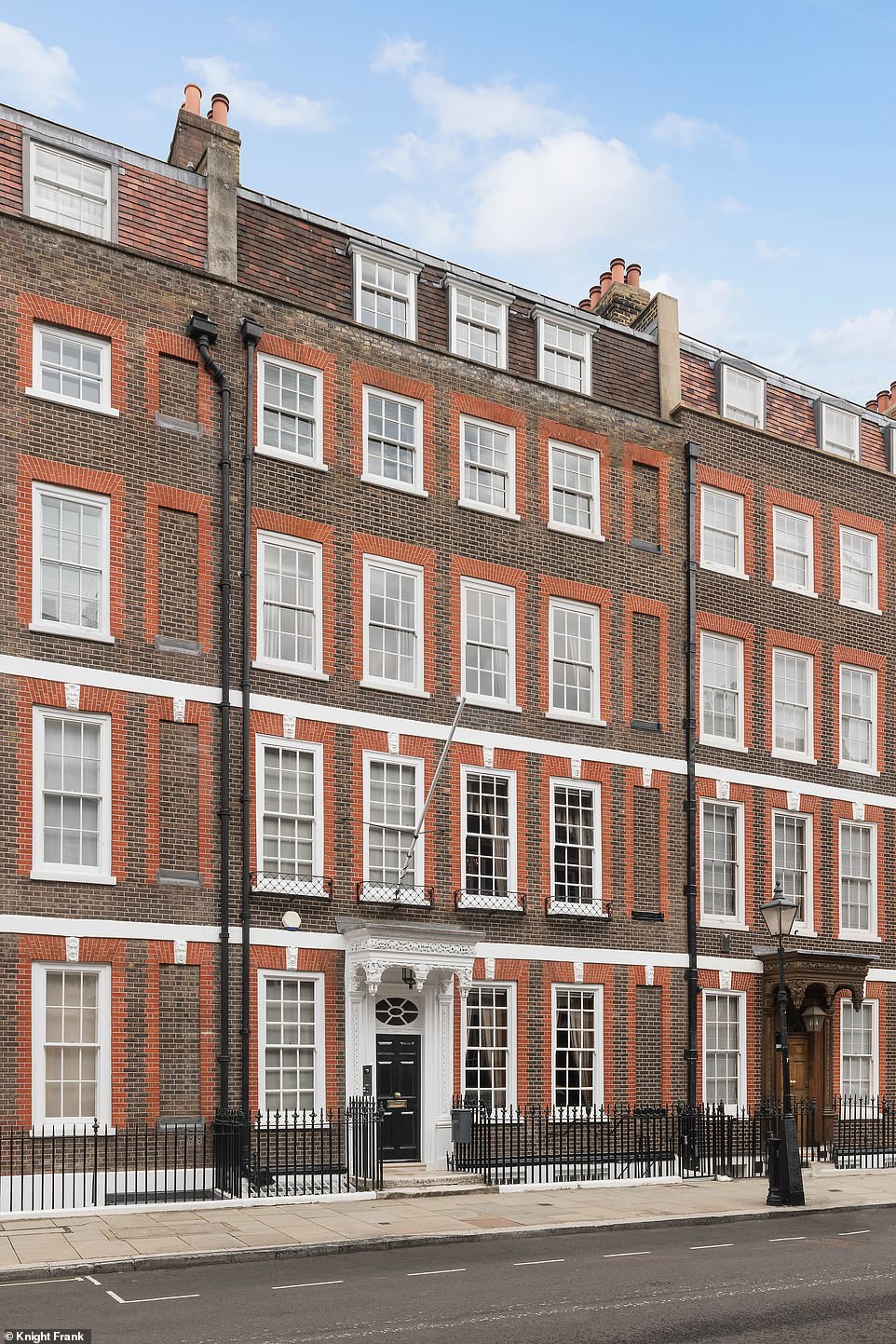 A stone’s throw from Buckingham Palace and overlooking St James’s Park, this home just off Birdcage Walk is on a street named after Queen Anne – the perfect pad for a royal fanatic 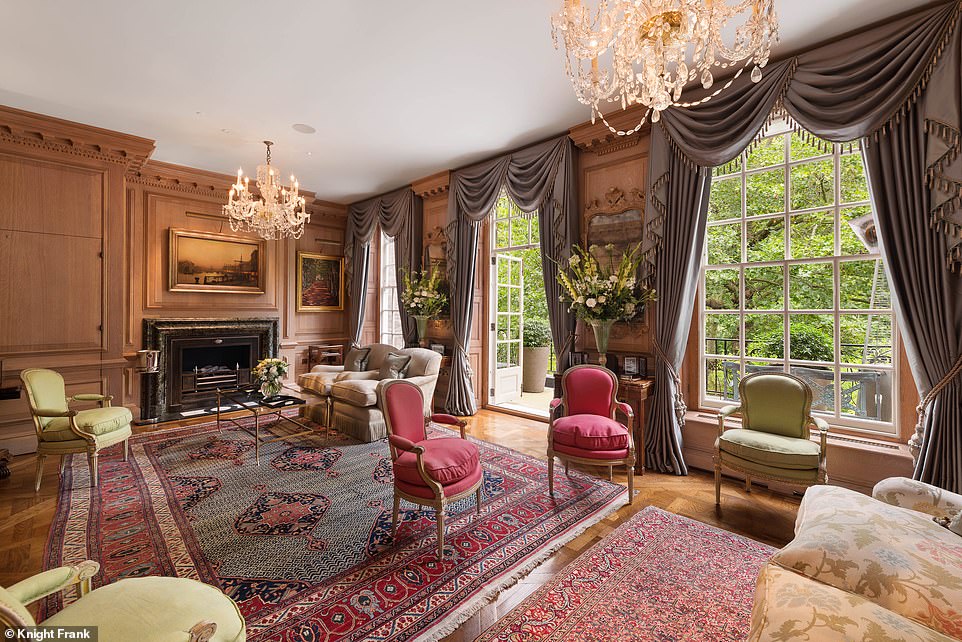 The six-bedroom palatial property comes with a study, gym, steam room, sauna and state of the art cinema, while its period decor is elaborately elegant.

A stone’s throw from Buckingham Palace and overlooking St James’s Park, this home just off Birdcage Walk is on a street named after Queen Anne – the perfect pad for a royal fanatic!

The six-bedroom palatial property comes with a study, gym, steam room, sauna and state of the art cinema, while its period decor is elaborately elegant.

The gardens and rear wall at the basement level of the property are on Crown land managed by the Royal Parks, meaning the purchaser will need to enter into a licence for the continued use of the garden and the related encroachments. 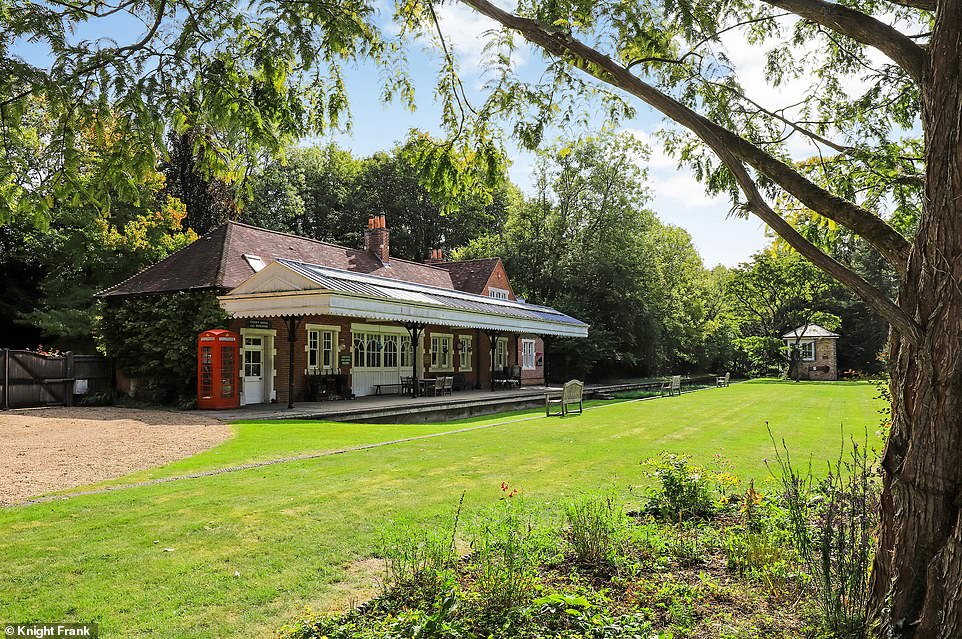 During World War II, Droxford station was used by Prime Minister Winston Churchill – played by John Lithgow in The Crown – as his base during preparations for the Normandy landings.

Based in an armoured train parked in the sidings at Droxford, Churchill met with numerous ministers, military commanders and leaders of allied nations.

The property has undergone an extensive yet sympathetic extension and refurbishment to create a comfortable and beautifully presented home with many original features.

On the ground floor is the drawing room, formerly the main station waiting room, with an oak panelled vaulted ceiling, dual aspect and a log burning stove.

The family room – once the ladies waiting room – also has a fireplace with stove and the study, originally the ticket office, retains the booth and cabinets from its operating days.

Within the grounds is the signal box, which was rebuilt by the current owners as an elegant one bedroom annexe with an open plan living space, kitchenette and fireplace, a double bedroom and private bathroom.