Health Minister Greg Hunt says the government wants its response to the aged care royal commission to make a fundamental and material difference to the sector, which will receive at least $10 billion over four years in Tuesday’s budget.

Mr Hunt said the five-year plan to be unveiled in the budget would be transformative. 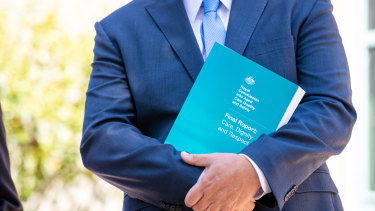 The government will respond to the royal commission in full on Tuesday.Credit:Edwina Pickles

Council on the Ageing chief executive Ian Yates said he felt more confident on the eve of the budget than ever before that there would be substantial changes to the sector.

“It’s certainly clear that this will be a large-scale set of reforms,” he said. “But government’s capacity to think those systemic changes through is always a challenge.”

Bupa chief executive Hisham El-Ansary said industry data showed as many as 60 to 70 per cent of operators, including Bupa, were losing money.

“Do I want to increase wages? Absolutely. Do I want to have more people caring for our residents? I’d love to do that as well. But the current funding model means that most operators are not able to keep their head above water and the macro problem there is if they start closing, then who’s going to deliver care?”

The Royal Commission into Aged Care Quality and Safety’s final report, released in March, contained 148 recommendations for an overhaul of the sector. Most were joint recommendations from the two commissioners while others were split.

Commissioners Lynelle Briggs and Tony Pagone QC recommended a new aged care act, mandatory minimum qualifications for workers, better integration of primary care and allied health, and an independent pricing authority. They also called for a single aged care model combining Commonwealth home support, home care and residential care in one program, and the provision of care based on need rather than rationing.

Ms Briggs and Mr Pagone were divided on 25 recommendations but Mr Hunt said those differences had provided the government with valuable options.

“We called the royal commission precisely because we want to make a fundamental and material difference,” he said.

Mr Yates said he was hopeful the bed licence system limiting the number of residential aged care places across locations would be scrapped. He also wants to see a commitment to uncapping both home care and residential places.

Treasurer Josh Frydenberg confirmed on the weekend the government would invest more than $10 billion over the forward estimates into the sector.

“We need to know which recommendations the government is essentially kicking down the road,” she told the ABC’s Afternoon Briefing. “I will be looking forward to seeing what the government is doing but also what they will not be doing because consistently they have done as little as they can get away with.”

“It’s one thing to catch up on the current gap. And then it’s another thing to ensure that ongoing funding beyond that, keeps pace with the changing expectations and cost structures of aged care.”