Senator Jacqui Lambie has denied she made a homophobic remark to staff at a Qantas lounge, two days after apologising for her conduct when the comments were put to her.

On Wednesday the Senator issued a lengthy apology to Qantas staff over her actions at the Melbourne Chairman’s lounge front desk, which prompted the airline to ban her from all services for six months. 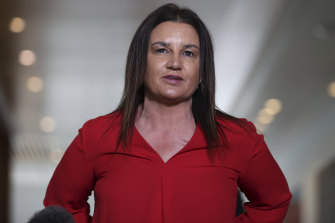 Jacqui Lambie has denied making a homophobic slur to staff at the airport. Credit:Alex Ellinghausen

After putting the remarks to her, CBD reported that the Tasmanian Senator had sworn at staff, used the phrases “pussy power” and “your CEO is a poof”.

The Senator had erupted when staff informed her she could not access the lounge after previous behaviour.

“It was the end of a long week in Canberra. I’d backed into a car that morning, got a speeding ticket on the way to work, and my flight home was delayed.”

The senator said she was not in her usual frame of mind due to taking pain medication for an old back injury. “It was a bad day for me. But it was worse for the poor Qantas staff who had to stand and take my rant. It was totally uncalled for and totally unacceptable behaviour on my part. I have apologised to the staff for my actions, and I’d like to do so again.

“I’ll take whatever punishment Qantas throws at me. I’ve done the crime and I’ll do the time, because that’s what I deserve.”

But on Friday the Senator had a change of tack on social media, denying she had made the homophobic slur.

“I never said it. I’d never say that. I’m not a homophobe, and I don’t know why someone is anonymously accusing me of being one. It never happened. What did happen was I blew my top at a Qantas worker who didn’t deserve it, and I apologised to them, I’ll apologise now, and I’ll wear the consequences.”

She said she asked Qantas directly and “got witnesses confirming I never said it”.

For their part, Qantas – after two days of silence – issued a statement saying it doesn’t typically comment on individual customer matters.

“(However) the allegation of hate speech being used in our lounges requires a response. We have confirmed with our lounge staff that Senator Lambie did not make a homophobic remark as part of the incident for which she has apologised.”