A father has sparked outrage online for saying he spends so much time babysitting his and his neighbour’s children that he should get paid for the ‘burden’.

Writing on Reddit, the 39-year-old parent, who is believed to be British, said his wife regularly goes out to watch horror films with their neighbour, Walter, who shares the same passion.

But the anonymous user said he has ‘grown a little tired of the burden of constantly babysitting the girls’ and was offered payment for his time by his neighbour, which he was happy to accept.

His wife opposed the idea and many online users agreed, saying that looking after your own child ‘isn’t babysitting’. 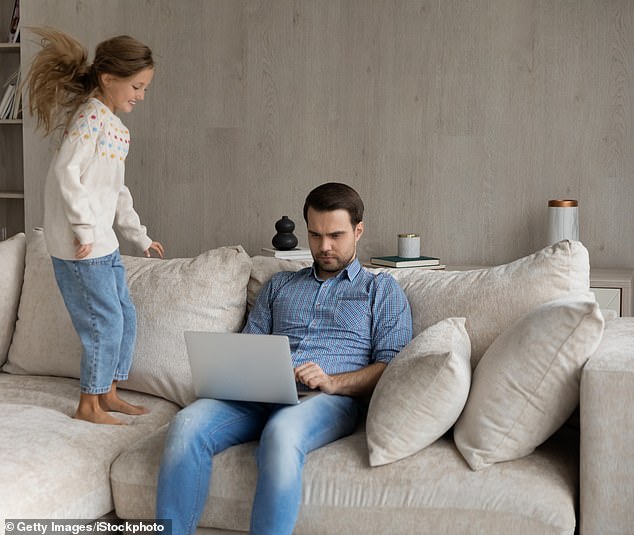 A 39-year-old father wrote a post online saying he spends so much time looking after his and his neighbour’s children, he should be paid

Sharing his ordeal online, the father wrote: ‘My wife, 34, and I live in at a suburban house with our daughter, 10. Our neighbour next door is a single father with two daughters, 14 and 12.

‘My wife really likes watching scary movies but I have never enjoyed them. I get too scared and end up having a bad time so I prefer to avoid them.’

The poster explained that his wife has a niche interest in older, indie and foreign horror movies and they were glad to discover that their neighbour also shares the same passion.

‘They very quickly started to make plans to watch movies together,’ he added. 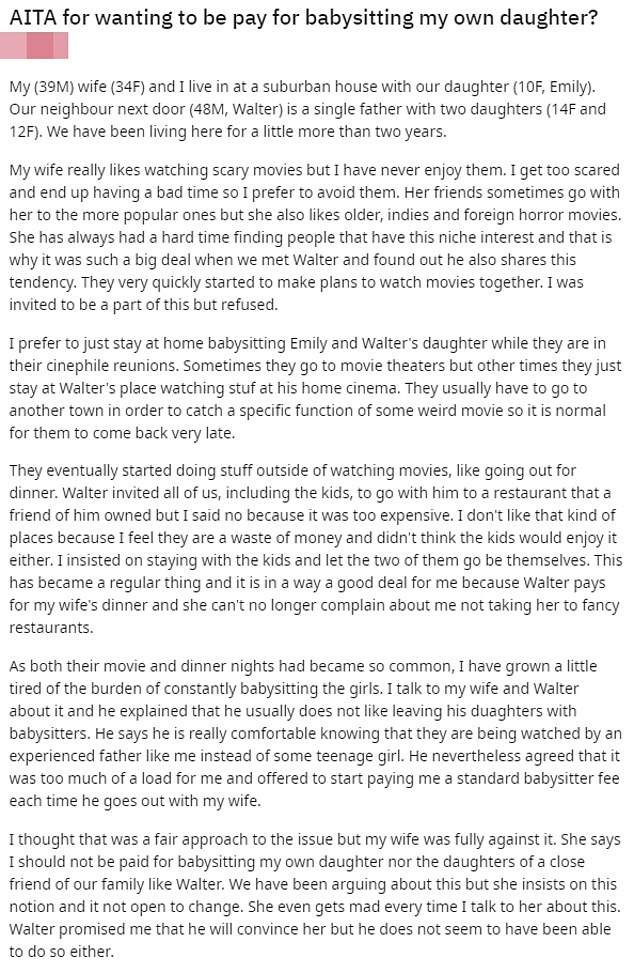 Writing on Reddit, the 39-year-old parent, who is believed to be British, said his wife regularly goes out to watch horror films with their neighbour, Walter, who shares the same passion

‘I was invited to be a part of this but refused.

‘I prefer to just stay at home babysitting Emily and Walter’s daughter while they are in their cinephile reunions.

‘Sometimes they go to movie theaters but other times they just stay at Walter’s place watching stuff at his home cinema.

‘They usually have to go to another town in order to catch a specific function of some weird movie so it is normal for them to come back very late.’

He continued: ‘They eventually started doing stuff outside of watching movies, like going out for dinner.

Online users criticised the father for his attitude to looking after the children, saying he was confusing ‘babysitting’ for ‘parenting’

‘Walter invited all of us, including the kids, to go with him to a restaurant that a friend of his owned but I said no because it was too expensive.

‘I don’t like that kind of place because I feel they are a waste of money and didn’t think the kids would enjoy it either.

‘I insisted on staying with the kids and let the two of them go be themselves.

‘This has become a regular thing and it is in a way a good deal for me because Walter pays for my wife’s dinner and she can no longer complain about me not taking her to fancy restaurants.

‘As both their movie and dinner nights had became so common, I have grown a little tired of the burden of constantly babysitting the girls.

‘I talked to my wife and Walter about it and he explained that he usually does not like leaving his daughters with babysitters.

‘He says he is really comfortable knowing that they are being watched by an experienced father like me instead of some teenage girl.

‘He nevertheless agreed that it was too much of a load for me and offered to start paying me a standard babysitter fee each time he goes out with my wife.

‘I thought that was a fair approach to the issue but my wife was fully against it.

‘She says I should not be paid for babysitting my own daughter nor the daughters of a close friend of our family like Walter.

‘We have been arguing about this but she insists on this notion and is not open to change.

‘She even gets mad every time I talk to her about this. Walter promised me that he will convince her but he does not seem to have been able to do so either.’

Comments flooded in to criticise the father, finding fault with his attitude as a father and a husband.

One user commented: ‘It’s not babysitting, it’s being a parent. Also, are you aware you’re pushing your wife into the arms of another man?’

Meanwhile another person said the poster was overstating the amount of work involved looking after the children, saying: ‘how hard is it to watch three girls aged 10-12?

‘You really just have to be present in the house or nearby to loosely supervise in case of emergency…other than that they entertain themselves.’

One comment criticised the dad for ‘complaining about sitting at home and moping and ‘babysitting’ which you chose to do.

‘Also, ticking the box of taking your wife out for a nice dinner by letting someone else do it?’ they added.

Another wrote: ‘It’s called parenting’ and added ‘He offered to pay for it, that’s on him. You don’t get paid for watching your OWN daughter as well though.’