Last month, my husband became a judge at the age of 40.

"Part-time and bottom-rung", he demurs modestly, but still. Meanwhile, I do both the ballet and the football run on Wednesdays after school. Heady times. Of course, I am wildly proud of him, but I am also rather envious. 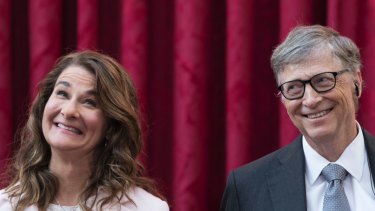 Melinda Gates has said it’s OK to be jealous of your husband’s career.
Credit:AP

Since we met at university, our careers have run parallel and, as a barrister and deputy editor on a national magazine, I felt we were on an equal footing. Until last year, that is, when we made the joint decision I would take a temporary step back for our two children, aged eight and four, and to orchestrate a move out of London to Hampshire.

I wasn't the main earner and assured myself I could fit freelance work into the school day. It made perfect sense to press pause. The children are happier and domestic life is far more straightforward. Simply being in a position to make this choice is a privilege, and I adore the very bones of my children.

But I am also conflicted. I feel less important, less defined, less involved in the wider world. Work made me feel like I mattered. My days had a sense of structure and purpose. When people asked what I did, I had an easy answer. I wasn't under any delusion that I could match my husband's salary, but it wasn't about the money. It was about feeling valued and equal.

"What we do has a significant effect on our self-worth," explains Jo Hemmings, a behavioural psychologist. "For many of us, it's about far more than making money – it's a career, so leaving it is going to result in resentment, envy or irritation. And if you are in a relationship in which you're accustomed to having career parity, it creates an imbalance."

This imbalance doesn't discriminate. It's my marriage. Many of my friends' marriages. Possibly yours, too. It's even been a part of Melinda and Bill Gates's marriage. (Never did I think I would have something in common with the world's wealthiest couple.)

In her new book, The Moment of Lift: How Empowering Women Changes the World, Melinda writes about how the balance of power and equality in her marriage shifted after she stepped down from her role at Microsoft to focus on the "unpaid work" of running a house and rearing children. The transition from "computer science business executive" to "mum with a small child and a husband who was busy and travelling a lot" left her, she admits, with a "crisis of self". She and Bill were the lucky ones – he stepped up domestically and they renegotiated their concept of what it meant to be equal partners. But it doesn't always work out.

Judging by her account in Stella magazine, Louise Redknapp took to UK reality show Strictly Come Dancing because of her own "crisis of self". Her husband Jamie's post-football career had taken off while she was, in her words, "promoting yogurt".

She continued: "I lost myself. I think this happens to a lot of women when they get married and have children. You have this feeling deep inside you, 'Where did I go?' Having a successful husband is great, but it is also a reminder of you not being successful."

I feel less important, less defined, less involved in the wider world. Work made me feel like I mattered.

Is it normal to celebrate your partner's success, but with a twinge of envy that your own career is on hold?

"It's very common," Lianne Young, a sex and relationships counsellor, says. "If one person has sacrificed the career they worked hard for, while the other gains strength, it can lead to envy, anxiety and depression. You might feel left behind, trapped, or less desirable."

"I watch my husband swan out the door in the mornings with envy," admits a friend who took a career break from her job as a solicitor when the family moved to the country. Her husband still commutes to his city job. "It's not just that he escapes the daily grind, but more that his career remains undiminished by having a family. I took the hit because he earns more. I'll look for a new job when our youngest starts nursery, but it needs to be local and part-time because my husband's has little flexibility. I envy him having his shot at career glory when it feels like mine is permanently compromised."

Whatever we might feel, there remains the inescapable fact that children need nurturing – but at what cost? A study of the gender pay gap by Princeton economist Henrik Kleven revealed a 30 per cent decline in women's earnings after the birth of their first child, to the cumulative effect that they earn 20 per cent less over the course of their career.

What's more, mothers face a different career trajectory from women who don't have children, whose earnings rise at a similar rate to men's. Forget the gender gap, it's a childbearing penalty.

Kleven gathered his data in Denmark, home of flexible working hours, a year's shared parental leave, and heavily subsidised state nurseries where children frolic, rosy-cheeked. (It's possible I'm romanticising this.) Still, in social studies, most Danes believe mothers should not work full time, and when flexibility is offered, it's mostly mothers who take it. Data show that Danish fathers account for 10 per cent of the total leave afforded to parents.

Although Australia has had a government paid parental leave scheme since 2011, WGEA data shows leave from employment after a child is born is still overwhelmingly taken by women. This hits upon a question as yet unanswered by any study: do most mothers become primary caregivers (and part-time workers) due to a societal push, or an intrinsic pull? My husband is a terrific father and a feminist – but I know he has never lain awake, totting up the hours the children spent with the nanny per week versus with him, as I did when I worked full time. Am I in fact the architect of my own career envy?

"Being envious of a partner's career success can mean you blame your partner for taking something from you, causing anger, which leads to arguments and – in some cases – a break-up," says Young. "If you're the one being envied, you might feel guilty. One feels the responsibility; the other feels the loss."

While my husband and I are definitely not at daggers drawn, Young highlights two flashpoints that do resonate: "Insecurity, because you are reliant on someone else, and jealousy because you feel less. Of course, a good partner will sense something is wrong and ask the other if they're OK, to which the answer is often 'I'm fine' when they're not."

I wince. I have been known to adopt the "I'm fine" stance. But when I do admit to my husband that I'm envious of his career (and, ahem, writing about it), he's surprised: "I certainly don't see you as less important." How would he feel if our positions were reversed? "It would be quite challenging, to be honest." Would he envy me? Long pause. "Yes, in some ways. But then in some ways I'm envious of you now." Really? He mentions the "coffee, cake and homework" date I have with our daughter. I begin to understand: I get the best of the kids rather than the end of bedtime (if he's lucky).

Back to Jo Hemmings: "We're moulded by our expectations and experiences and we're accustomed to women being the maternal gatekeepers, but there is nothing to stop us overruling that. It might impact you financially, but in terms of your relationship and fulfilment, it might be better to split things more evenly."

Until then, both parties need to open up about what they feel they have gained and lost in the new situation, according to Young. "Respect each other: don't compare your feelings. Make a long-term plan as to how the situation will remain to give you a focus and timeline." Oprah – via Betty Friedan – was right: you can have it all. Just not all at once. Until then, I have my dates, good company and good cake – who can blame my husband for feeling a little envious of that?