“There being no objections, the petition for change of name is granted,” Judge Michelle Williams Court said in court documents. The Donda rapper originally filed the petition to change his moniker in August, citing “personal reasons.” 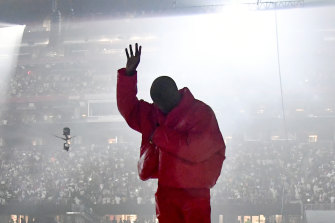 His ex Kim Kardashian West and their four children — North West, 8, Saint West, 5, Chicago West, 3, and Psalm West, 2 — all bear his former surname. Kardashian West didn’t change her last name back to Kardashian when she filed for divorce in February.

Ye, an abbreviation of his first name, is the rapper’s longstanding nickname that he used as early as 2012 in his hit single Clique featuring Jay-Z and Big Sean (“Yeah, I’m talking Ye”).

In 2018, the rapper, music producer and clothing entrepreneur announced on Twitter that he’s no longer “the being formally known as Kanye West… I am YE.” Some may refer to Ye as an alter ego, but West explained in another tweet: “Who or what is Kanye West with no ego? Just Ye.”

Ye also has a religious significance to him. West titled his eighth studio album Ye, which was released in 2018.

“I believe ‘ye’ is the most commonly used word in the Bible, and in the Bible it means ‘you,’ ” West said during an interview in June 2018.

He continued: “So I’m you, I’m us, it’s us. It went from Kanye, which means the only one, to just Ye — just being a reflection of our good, our bad, our confused, everything. The album is more of a reflection of who we are.”

Ye’s name change is the latest shakeup for the star. He also recently put his ranch and business properties in northwestern Wyoming up for sale for $US 11 million. Ye moved from California to Wyoming in 2019.