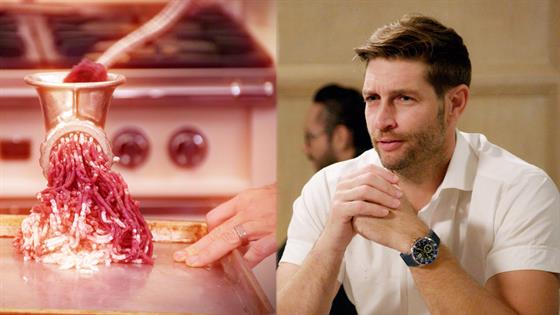 Kristin Cavallari‘s husband might be spending less time on the family farm from now on!

The Uncommon James boss finds out what’s next on Jay Cutler‘s post-football agenda in this clip from Sunday’s penultimate episode of Very Cavallari‘s season 2.

The video opens on the sun-kissed couple enjoying a romantic candlelit dinner in Cabo the evening before their friends are expected to arrive. After reminiscing about the time a stranger confidently addressed her hubby as “Mr. Cavallari”, Kristin asks Jay if he’s given the future—and more specifically, the possibility of putting his retirement plans on hiatus for a while in favor of doing something he’s more passionate about—any more thought since they last spoke about it.

“I have,” he tells her. “I was talking to Mike about trying to open a butcher shop.”

Fans who’ve been keeping up with this season might remember the afternoon several weeks back when Kristin came home to find Jay and “Chef Mike” (a friend whose culinary insights appear in Kristin’s cookbook True Roots) enthusiastically preparing “95 to 100 pounds” of meat in their Nashville kitchen.

“How involved do you want to be in the butcher shop?” asks the entrepreneur and mom of three after praising his potential business venture. “Like, are you gonna be in there slicing meat for people?”

Jay reminds his wife he’s “not a butcher,” so he’d probably have to delegate most of the meat-handling responsibilities to a more experienced third party. Anyone else really curious about what he’d be like as a boss? The ex NFL player teases his intended managerial style in the new clip.

“I’m gonna be…micromanaging the s–t out of people,” he laughs.

“I think this is a huge step in the right direction,” Kristin tells the camera later. “As long as he’s doing something he’s passionate about, I’m really excited for him.”

Learn more about Jay’s butcher shop plans—and hear his wife’s off-the-cuff suggestion for a company name—in the clip above!

Watch a brand new episode of Very Cavallari Sunday at 10 p.m., only on E!